Brazil’s jailhouse preachers may not explicitly condone violence against people of other faiths, but they’ve remained largely silent as their well-armed followers wage a holy war. Reuters/Ricardo Moraes

Charismatic Christianity is on the rise across Brazil. Even Rio, a famously libertine city, elected an evangelical mayor last year. Now, evangelical Protestantism is so far-reaching in Rio that even some of the city’s most notorious drug dealers claim to be spreading the gospel.

I study violence in Latin America, and I’ve observed a sharp increase in reports of religiously motivated crimes in Rio de Janeiro over the past year, in particular attacks on “terreiros” – the temples belonging to the Candomblé and Umbanda faiths.

Persecution of these Afro-Brazilian religions, whose adherents are largely poor black Brazilians, has been around since the 19th century. But studies in Rio – both mine and those of other crime researchers – suggest that the current wave of religious bigotry is more pointed, and more violent, than in the past.

While statistics confirming this new trend are still poor, the increase in religious hate crimes appears to coincide with the spread of evangelical Protestantism in Brazil.

Today roughly a quarter of all Brazilians identify as Protestant, up from 5 percent in the 1960s. Many Brazilian Protestants attend mainstream services. But the fastest-growing denominations in Brazil are the hard-line Pentecostals and Neopentecostal churches – including the wildly successful Assembly of God and the Universal Church of the Kingdom of God.

#Brazil is losing its #Catholic population. Unlike in the West not to #Atheism but largely to other faiths. Source: https://t.co/T4NdQcGOs9 pic.twitter.com/sU7MPxhu7A

Rio de Janeiro saw a 30 percent increase in evangelicals from 2000 to 2010. Over the same period, the number of Catholics and followers of Candomblé and Umbanda dropped by 9 percent and 23 percent, respectively.

Most converts are poor people attracted to the evangelical doctrine of personal salvation. Today, evangelical leaders in Rio’s impoverished favelas routinely deliver a message of fidelity, purity and prosperity.

Some of them also have a dim view of Afro-Brazilian religions. For preachers espousing a binary spiritual worldview, “good” Christians must wage holy war against “evil” practitioners of Candomblé and Umbanda.

As Edir Macedo, the multi-millionaire bishop of the Universal Church of the Kingdom of God, wrote in his 1997 book “Orixás, Caboclos and False Gods or Demons”, Afro-Brazilian religions “seek to keep us from God. They are enemies of Him and the human race … This struggle with Satan is necessary…to eternal salvation.”

The book sold more than three million copies before it was banned by federal authorities in 2005.

For some analysts, this theological interpretation is just thinly veiled religious discrimination.

Still, parishioners – including a handful of drug kingpins who control favelas across Rio – are heeding the call to arms. For these evangelical criminals, Candomblé and Umbanda are Satan’s work, and they must be stamped out, one terreiro at a time.

Fernandinho Guarabu, a 38-year-old don in Rio’s Terceiro Comando Puro gang, is an example. Sporting a tattoo of Jesus Christ, Guarabu is known for violently “cleansing” his community – the Morro do Dendê favela – of practitioners of Afro-Brazilian religions. 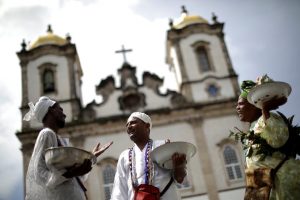 In some gang-controlled parts of Rio, just wearing the religious garb of Candomblé or Umbanda is a crime punishable by expulsion. Reuters/Ueslei Marcelino

According to a state hotline dedicated to tracking religious intolerance, more than 30 terreiros were destroyed in fewer than 20 days during September 2017, and reports of religious discrimination have increased 119 percent since 2015.

Adherents of Afro-Brazilian religions living in gang-controlled areas report personal harassment, too. Followers are often prohibited from practicing their faith, and people caught wearing the religious garb of Candomblé and Umbanda may be expelled from the community.

According to representatives of a newly launched Commission on Combating Religious Intolerance, drug traffickers are responsible for a sizable number of these cases.

A small group of evangelical preachers in Rio de Janeiro’s favelas may have inspired these anti-Candomblé and Umbanda crusades, but the problem escalated in prisons.

A decade-long war on drugs has fueled mass incarceration. Brazil’s overcrowded state prisons are essentially governed by one of two competing drug trafficking organizations with the government only nominally in control.

Gangs have long recruited their rank and file from prisons, and incarcerated members stay busy organizing trafficking and racketeering businesses.

Faith groups, too, have a long tradition of working with prisoners. The Universal Church and Seventh Day Adventists, among others, run programs in those same prisons, from drug treatment to restorative justice.

Previously, these ministries were predominantly Catholic. Today, of the 100 faith-based organizations subcontracted to run social programs in prisons, 81 are evangelical churches.

As a result, Charismatic Christianity has spread quickly through the criminal justice system. Jailhouse conversions are common. Evangelized inmates are frequently housed in separate prison wings that stand out for their order and cleanliness. Some have even established their own ministries inside jail.

For drug kingpins, developing positive relationships with local Rio pastors while in jail can tighten their grip on power once released.

Converted traffickers control many of the city’s favelas, but the violent heartland of evangelical trafficking is Baixada Fluminense, a sprawl of townships in Rio’s poor northern outskirts.

Over the past century, the area has seen waves of migration from Brazil’s north and northeast, where Afro-Brazilian religions prosper. Baixada Fluminense is now home to at least 253 Candomblé and Umbanda terreiros, more than any other municipality in the state.

Described by locals as a “Wild West,” the area is home to famously corrupt public officials who have long worked with militia and mafia groups to intimidate their rivals. This practice – called “coronelismo,” or patronage – allows drug traffickers, evangelical or otherwise, to operate with impunity.

Rio de Janeiro state officials are taking note of this worrying new strain of violence. In the wake of attacks on Afro-Brazilian terreiros in Nova Igaçu, a municipality in Baixada Fluminense, the Joint Commission to Support Victims of Attacks on Religious Institutions was launched.

Working alongside a newly established task force dedicated to tackling racial crimes and intolerance, the state commission aims to map religious violence and resolve outstanding cases, including those involving evangelical drug traffickers. It will also make recommendations to prevent violence in the name of God.

People of faith are fighting back, too. In September 2017, some 50,000 people joined Rio’s 10th annual walk for religious freedom, the largest gathering since the procession’s inception. The iconic Copacabana beach was packed with evangelicals, Catholics, Baha’i, Buddhists, Jews, Hari Krishnas and others – all dressed in white and marching in solidarity with Afro-Brazilians.

In Brazil’s religious diversity, there is conflict, yes, but unity, too.