Closed altarpiece. Left to right: before, during, and after restoration.

Since 2012 it has been possible to zoom in on the intricate, breathtaking details of one of the most important works of art in the world, the Ghent Altarpiece, through the web application Closer to Van Eyck. Now, major enhancements offer even more ways to explore this important painting. Improvements include new images of the work under various stages of conservation treatment, a larger range of technical images, and the ability to see and compare multiple views of the painting at the same time.

Located at St. Bavo’s Cathedral in Ghent, Belgium, The Mystic Lamb of 1432 by Hubert and Jan van Eyck, also known as the Ghent Altarpiece, is a stunning and highly complex painting composed of multiple oak panels. Since 2010, several Getty Foundation grants awarded through its Panel Paintings Initiative have supported training and technical examination related to the structural conservation of the altarpiece, as well as the development of the web application using documentation generated during the study of the altarpiece. 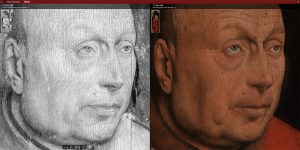 A collaboration among St. Bavo Cathedral’s Church Wardens, the Flemish government, the Royal Institute for Cultural Heritage and their partners led to the first, multi-year conservation treatment of the work in 2010. The panels and frames of the closed altarpiece were treated between 2012 and 2016 and the large-scale campaign now continues with the panels of the lower register of the open altarpiece. The Closer to Van Eyck web application launched in 2012, and recently received major updates to further reveal the painterly magic of Hubert and Jan Van Eyck.

The altarpiece can now be viewed online in visible light, infrared, infrared reflectograph, and X-radiograph, with sharper and higher resolution images. When visiting the site, you can adjust a timeline to view key moments in the conservation process, and simultaneously view images from before, during, and after conservation. You can also zoom in even closer than previously possible on details of the painting, exploring microscopic views of the work in 100 billion pixels. Take a tour of the site here. 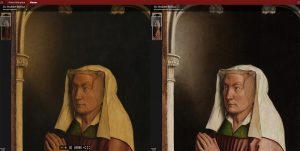 Elisabeth Borluut before and after restoration

The conservation work led to the discovery that around 70% of Van Eyck’s original paint layer on the panels of the closed altarpiece had been hidden beneath overpaint for centuries, requiring painstaking removal. The removal of this paint is reflected in the images presented online. 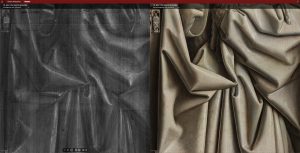 John the Baptist in grisaille detail folds X-ray and photo

The web application Closer to Van Eyck is the result of the close collaboration of numerous institutions and individuals, listed here. More information about the Getty Foundation’s Panel Paintings Initiative is available here.