Over a period of 30 years, millions of criminals and political prisoners were sent to Soviet labor camps. Wikimedia Commons

In 2011, I was at the Hoover Institution Archives sifting through the papers of the Latvian poet and journalist Arsenii Formakov (1900-1983) when I noticed a folder of letters encased in clear plastic.

From the oval censorship stamps and Formakov’s return address, I could immediately tell that I was looking at his private correspondence from labor camp.

In June 1940, the Soviet Union had forcibly annexed Latvia. Like thousands of other Latvian citizens, Formakov was accused of harboring anti-Soviet views and sentenced to corrective labor in Siberia. He joined a population of prisoners that, by January 1941, numbered 2.9 million, and were held in a vast network of prisons, labor camps and colonies across the Soviet Union.

Formakov’s letters – marred with stains, black marks left by censors and abrasions from frequent handling – revealed a great deal about the hardships he and his fellow inmates had faced. I realized that by translating them into English from Russian, I could shed light on an important chapter in history. “Gulag Letters,” the collection of correspondence by Arsenii Formakov I have edited and translated, gives English language readers a seldom-seen view into day-to-day life at the Soviet labor camps. The Formakov correspondence also tells the poignant story of a family that survived the dual catastrophes of Nazi and Soviet occupation, events that continue to define Latvian identity today.

Soon after the October 1917 Russian Revolution, the newly formed Bolshevik government created its first concentration camps. As successive large-scale purges took place in the 1920s and 1930s, the system gradually expanded, with forced labor camps built in distant areas that were rich in natural resources. While they served their sentences in brutal conditions, prisoners mined for gold and uranium, logged, farmed and built roads and cities.

Formakov’s writings from the 1920s and 1930s – some of which were clearly anti-Soviet – made him an obvious target for Soviet officials.

Imprisoned in his home city of Daugavpils for almost a year while his case was under investigation, he was eventually put on a cattle car headed to Siberia to serve an eight-year sentence for anti-Soviet activity – just as Nazi forces were approaching the region and the Soviet army was evacuating. 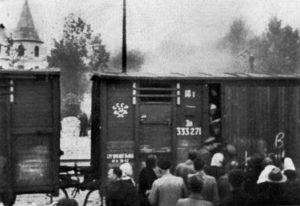 Railcars with Latvians to be deported to the East. Wikimedia Commons

Even readers who know a good deal about the Soviet labor camp system may find it surprising that an inmate like Formakov could write home with any frequency.

Well-known accounts of Stalin-era labor camps like Aleksandr Solzhenitsyn’s “Gulag Archipelago” and Gustaw Herling’s “A World Apart” imply, in their very titles, that detention sites were almost entirely cut off from the rest of Soviet society – islands divided from the country’s “mainland,” or underworlds into which prisoners disappeared, never to be heard from again.

In fact, most Stalin-era labor camp inmates theoretically enjoyed at least some letter-writing privileges. Although rules varied depending on where and when a prisoner was held, often inmates could receive an unlimited amount of correspondence through the official camp mail system (though this was heavily censored).

The amount they could send depended on the crime, with harsher limits for political offenders. In the 1940s, inmates sentenced for political crimes were often limited to sending only two to three letters home per year. But some political prisoners, like Formakov, managed to get around these constraints and send steady streams of letters through a mixture of official and illicit channels.

‘You just want to wail’

For the first three years of his confinement in the Krasnoyarsk region, Formakov had no information about the whereabouts of his family. Mail communication between the Soviet Union and Nazi-occupied Latvia, where his family remained, was impossible.

Only in 1944 – when Latvia returned to Soviet control – could he write home and receive responses from his wife and children. He wrote steadily from this point on until his release in 1947 (early, for good behavior). When he was sentenced to a second term of hard labor in 1949 (again, for political reasons), he continued writing, albeit more sporadically.

The letters that Formakov sent home describe his day-to-day experiences in Soviet labor camps. They recount the privileges that he was able to obtain by participating in camp cultural work, including access to a special cafeteria and extra rations. There are his efforts to get his deteriorating teeth capped and replace worn outer clothing, along with his dread of a potential move to a “site where the living conditions are worse and the work is harder,” as he notes in a letter dated Jan. 1, 1945.

Other times he despairs. For instance, in 1945 he was transferred from an indoor work assignment making sewing machine needles to heavy outdoor work hauling logs.

“Now that everything is in the past, I can confess that four months last year (from August until the day I was injured) were very hard for me physically. Sometimes you drag yourself along the path to the train car with a cross-tie on your shoulder, particularly one that is heavy, damp, made of larch (which is like oak). You are drenched in sweat, your heart beats as if it is about to jump out of your chest, you breathe so heavily you start to wheeze, like an overheated horse, and you begin to think: let my leg buckle. You’ll fall and the cross-tie will come crashing down on you from above, and that will be the end: no more suffering, everything will end forever!”

In a separate series of letters, Formakov describes the stage shows he performed in as part of a camp cultural brigade. In a letter to his wife dated March 9, 1946, Formakov explained that the sunny attitudes the inmates who participated in these shows had to assume were often very much at odds with their reality:

“We had a concert on the 8th in honor of International Women’s Day. I served as the emcee… You act as master of ceremonies, make some witty remarks, and then head backstage, release your soul, and you just want to wail… For this reason, I never let it go; my soul is always in a corset.”

In addition to letters on standard lined notebook paper and mass-produced postcards, Formakov sent handmade birthday and Christmas cards. In one case, he carved a special anniversary greeting into birch bark for his wife. He wrote and illustrated short stories for his two children (Dima, five years old at the time of Formakov’s first arrest in July 1940, and Zhenia, born in December 1940). And he decorated the pages of some of the letters he sent with pressed wildflowers.

Because he knew that even the letters he sent illicitly might be inspected and because he did not want his family to worry, Formakov doesn’t share the full horror of the labor camp experience that survivor accounts such as Evgenia Ginzburg’s “Journey into the Whirlwind” would later detail. He doesn’t mention the beatings that inmates often received from guards, or the punishment blocks where prisoners could be sent for breaking rules. He also omits the terrifying acts of violence that hardened criminals sometimes perpetrated on weaker political offenders.

But his letters – both those sent through official channels and those smuggled out – capture many details that rarely figure in the memoirs of labor camp survivors. For instance, in a letter dated August 10, 1944, Formakov describes the surreal experience of going to the camp club to watch the 1941 American musical comedy “Sun Valley Serenade,” which had just been purchased by Soviet authorities and would have been a hot ticket in Moscow. Similarly, in a communication dated Oct. 27, 1947, he references rumors of an impending devaluation of the ruble, which suggests that – despite the Soviet state’s efforts to keep plans for a December 1947 currency reform secret – news had leaked, even to distant labor camps.

Such passages support recent research by scholars Wilson Bell and Golfo Alexopolous, who have noted that labor camps were far more intertwined with the rest of Soviet society than previously thought.

Following his release in 1955, Formakov returned to his family in Riga – older and sicker, but alive.

He was one of the lucky ones: According to Latvian historian Irēne Šneidere, among a batch of prisoners shipped off to the Gulag 10 days before Formakov, only 25 percent survived.