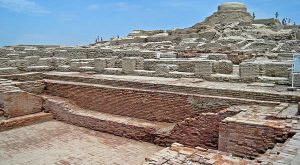 The Indus Valley civilization is considered one of the oldest in the world and now archaeologists believe that it might be even older than earlier estimated. According to new research, the Bronze-Age civilization which spreads across parts of Pakistan and India, may be 8000 years old – 2500 years older than previously dated.

A team of researchers from prestigious Indian institutes including IIT Kharagpur, Institute of Archaeology, Deccan College Pune, Physical Research Laboratory and Archaeological Survey of India (ASI) used carbon dating techniques on animal remains and pottery fragments from the Bhirrana site in India and came to the conclusion that earlier dating may have been incorrect.

It may be time to rewrite history textbooks. Scientists from IIT-Kharagpur and Archaeological Survey of India (ASI) have uncovered evidence that the Indus Valley Civilization is at least 8,000 years old, and not 5,500 years old, taking root well before the Egyptian (7000BC to 3000BC) and Mesopotamian (6500BC to 3100BC) civilizations. What’s more, the researchers have found evidence of a pre-Harappan civilization that existed for at least 1,000 years before this.

The discovery, published in the prestigious ‘Nature’ journal on May 25, may force a global rethink on the timelines of the so-called ‘cradles of civilization’. The scientists believe they also know why the civilization ended about 3,000 years ago — climate change.

“We have recovered perhaps the oldest pottery from the civilization. We used a technique called ‘optically stimulated luminescence’ to date pottery shards of the Early Mature Harappan time to nearly 6,000 years ago and the cultural levels of pre-Harappan Hakra phase as far back as 8,000 years,” said Anindya Sarkar, head of the department of geology and geophysics at IIT-Kgp.

The team had actually set out to prove that the civilization proliferated to other Indian sites like Bhirrana and Rakhigarrhi in Haryana, apart from the known locations of Harappa and Mohenjo Daro in Pakistan and Lothal, Dholavira and Kalibangan in India. They took their dig to an unexplored site, Bhirrana — and ended up unearthing something much bigger. The excavation also yielded large quantities of animal remains like bones, teeth, horn cores of cow, goat, deer and antelope, which were put through Carbon 14 analysis to decipher antiquity and the climatic conditions in which the civilization flourished, said Arati Deshpande Mukherjee of Deccan College, which helped analyse the finds along with Physical Research Laboratory, Ahmedabad.

The researchers believe that the Indus Valley Civilization spread over a vast expanse of India — stretching to the banks of the now “lost” Saraswati river or the Ghaggar-Hakra river – but this has not been studied enough because what we know so far is based on British excavations. “At the excavation sites, we saw preservation of all cultural levels right from the pre-Indus Valley Civilization phase (9000-8000 BC) through what we have categorised as Early Harappan (8000-7000BC) to the Mature Harappan times,” said Sarkar.

While the earlier phases were represented by pastoral and early village farming communities, the mature Harappan settlements were highly urbanised with organised cities, and a much developed material and craft culture. They also had regular trade with Arabia and Mesopotamia. The Late Harappan phase witnessed large-scale de-urbanisation, drop in population, abandonment of established settlements, lack of basic amenities, violence and even the disappearance of the Harappan script, the researchers say.

“We analysed the oxygen isotope composition in the bone and tooth phosphates of these remains to unravel the climate pattern. The oxygen isotope in mammal bones and teeth preserve the signature of ancient meteoric water and in turn the intensity of monsoon rainfall. Our study shows that the pre-Harappan humans started inhabiting this area along the Ghaggar-Hakra rivers in a climate that was favourable for human settlement and agriculture. The monsoon was much stronger between 9000 years and 7000 years from now and probably fed these rivers making them mightier with vast floodplains,” explained Deshpande Mukherjee.

With its impressive pyramids and complex rules, Ancient Egypt may seem to many the epitome of an advanced early civilisation.

But new evidence suggests the Indus Valley Civilisation in India and Pakistan, famed for its well-planned cities and impressive crafts, predates Egypt and Mesopotamia.

Already considered one of the oldest civilisations in the world, experts now believe it is 8,000 years old – 2,500 years older than previously thought.

Their study also sheds new light on why the seemingly flourishing civilisation collapsed.

A team of researchers from the Archaeological Survey of India (ASI), Institute of Archaeology, Deccan College Pune, and IIT Kharagpur, have analysed pottery fragments and animal bones from the Bhirrana in the north of the country using carbon dating methods.

‘Based on radiocarbon ages from different trenches and levels the settlement at Bhirrana has been inferred to be the oldest (>9 ka BP) in the Indian sub-continent,’ the experts wrote in Nature’s Scientific Reports journal.

They used also used ‘optically stimulated luminescence (OSL) method’ to check the dating and investigate whether the climate changed when the civilisation was thriving, to fill ‘a critical gap in information … [about] the Harappan [Indus Valley] civilisation.’

While more tests are required, the study suggests the Indus Valley Civilisation pre-dates those of ancient Egypt and Mesopotamia, which are also famed for their impressive ability to build organised cities.

It’s thought the civilisation spread across parts of what is now Pakistan and northwest India in the Bronze Age and at its peak, some five million people lived in one million square miles along citadels built near the basins of the Indus River.