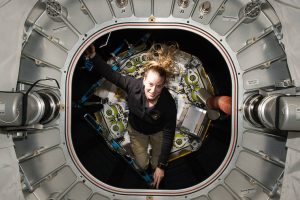 NASA astronaut Kate Rubins inspected the Bigelow Aerospace Expandable Activity Module (BEAM) attached to the International Space Station on Sept. 5, 2016. Expandable habitats are designed to take up less room on a spacecraft while providing greater volume for living and working in space once expanded. It was the first checkup of BEAM since the initial inspection of the space station’s expanded node after it was deployed May 28. Rubins collected radiation monitors and sampled surfaces inside BEAM to assess the microbe environment. Her inspection revealed the module appeared in good condition, and the samples and radiation detectors were packed for return to Earth for analysis. On Sept. 29, Rubins opened up and entered the Bigelow Expandable Activity Module again, and temporarily installed gear for a test to measure the loads and vibrations the module experiences. For the next two years, crew members will inspect the module every three months to check for stability.