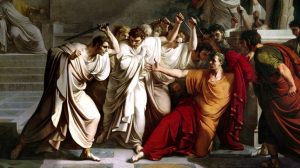 On the 15th of March, 44 BC, in a meeting hall adjacent to Pompey’s theater, the Roman Senate awaited the arrival of the Republic’s supreme commander, Julius Caesar. This particular session did not promise to be an eventful one for most of the senators. But others among them were fully alive to what was in the offing. They stood about trying to maintain a calm and casual pose—with daggers concealed beneath their togas.

Finally Caesar entered the chamber. He had an imposing presence, augmented by an air of command that came with being at the height of his power. Moving quickly to the front of the hall, he sat himself in the place of honor. First to approach him was a senator who pretended to enter a personal plea on behalf of a relative. Close behind came a group of others who crowded around the ceremonial chair. At a given signal, they began to slash at their prey with their knives, delivering fatal wounds. By this act, the assailants believed they had saved the Roman Republic. In fact, they had set the stage for its complete undoing. 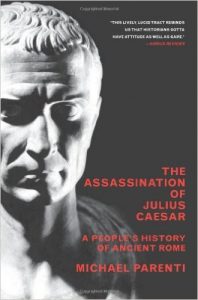 The Assassination of Julius Caesar: A People’s History of Ancient Rome / Michael Parenti

The question remains, why did a coterie of Roman senators assassinate their fellow aristocrat and celebrated ruler, Julius Caesar? An inquiry into this incident reveals something important about the nature of political rule, class power, and a people’s struggle for democracy and social justice—issues that are still very much with us. The assassination also marked a turning point in the history of Rome. It set in motion a civil war, and put an end to whatever democracy there had been, ushering in an absolutist rule that would prevail over Western Europe for centuries to come.

The prevailing opinion among historians, ancient and modern alike, is that the senatorial assassins were intent upon restoring republican liberties by doing away with a despotic usurper. This is the justification proffered by the assassins themselves. In my recent book, The Assassination of Julius Caesar: A People’s History of Ancient Rome, I present an alternative explanation: the Senate aristocrats killed Caesar because they perceived him to be a popular leader who threatened their privileged interests. By this view, the deed was more an act of treason than tyrannicide, one incident in a line of political murders dating back across the better part of a century, a dramatic manifestation of a long-standing struggle between opulent conservatives and popularly supported reformers.

Just about every leader of the Middle and Late Republics who took up the popular cause met a violent end, beginning with Tiberius Gracchus in 133 B.C. and continuing on to Gaius Gracchus, Fulvius Flaccus, Livius Drusus, Sulpicius Rufus, Cornelius Cinna, Marius Gratidianus, Appuleius Saturninus, Cnaeus Sicinius, Quintus Sertorius, Servilius Glaucia, Sergius Catiline, Clodius Pulcher, and ending with Julius Caesar in 44 B.C. Caesar’s death also marked the end of the 500-year Roman Republic. Even more reprehensible, the aristocratic oligarchs and their hired goons killed thousands of the Roman commoners who supported these various reform leaders.

The history of the Late Republic has been distorted by those writers who regularly downplay the importance of material interests, those whose ideological taboos about class realities dim their perception of the past. This distortion is also manifested in the way many historians, both ancient and modern, have portrayed the common people of Rome as being little better than a noisome rabble and riotous mob. In word and action, wealthy Romans made no secret of their fear and hatred of the common people and of anyone else who infringed upon their class prerogatives. History is full of examples of politico-economic elites who equate any challenge to their privileged social order as a challenge to all social order, an invitation to chaos and perdition.

The oligarchs of Rome were no exception. Steeped in utter opulence and luxury, they remained forever inhospitable to Rome’s democratic element. They valued the Republic only as long as it served their way of life. They dismissed as “demagogues” and usurpers the dedicated leaders who took up the popular cause. The historians of that day, often wealthy slaveholders themselves, usually agreed with this assessment. What is rather startling is the fact that the great majority of classical historians of the modern era adopt a viewpoint not too different from the one held by the Roman aristocracy. Whatever their differences in nationality, religion, language, and epoch, most of these historians share the same class-bound ideology, causing them to see the struggles of ancient Rome from the perspective of the elites rather than from that of the struggling proletarii and plebs.

Caesar’s sin was not that he was subverting the Roman constitution—which was an unwritten one—but that he was loosening the oligarchy’s overbearing grip on it. Worse still, he used state power to effect some limited benefits for small farmers, debtors, and urban proletariat, at the expense of the wealthy few. No matter how limited these reforms proved to be, the oligarchs never forgave him. And so Caesar met the same fate as numerous other reformers before him—and so many other reformers down through the centuries since his day.