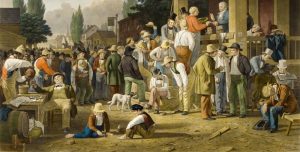 How did the federal government raise money in the early years of the United States? 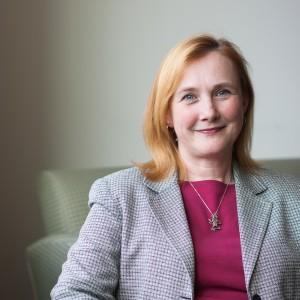 The founders pondered this question from the very beginnings of the republic. Although the Articles of Confederation directed each state to contribute money voluntarily in proportion to the land values within the state, there was no provision compelling the states to pay. Many states initially contributed little or nothing toward the federal government’s operations. Raising revenue became much easier after Americans ratified the U.S. Constitution, but taxation continued to present challenges.

One potential revenue source involved the sale of western lands. In his plan to organize the Northwest Territory—that area north of the Ohio River and east of the Mississippi—Thomas Jefferson proposed that Congress give the land away rather than selling it, because future taxes would provide a return on the new nation’s investment. However, when legislators laid out the process by which the territories became states in the Northwest Ordinances of 1784, 1785, and 1787, they directed that the land be sold. Although land sales helped to raise some revenue, it was not enough to make the new nation solvent.

Fortunately, the United States Constitution gave Congress the teeth to compel states and individuals to pay taxes. There was no income tax, so most federal revenue came from customs duties, land sales, and taxes levied on goods such as distilled spirits, slaves, and tobacco. In 1789, Congress created the Department of Treasury to manage the nation’s money, and the Secretary of the Treasury, Alexander Hamilton, proposed innovative ways to collect revenue. Some of his ideas, such as granting subsidies to domestic manufacturers and imposing tariffs on imported goods to encourage “buying American,” were too controversial for Congress to implement. However, Congress enacted some of his other proposals, such as a Bank of the United States, which held all federal money. The federal government owned 20% of the bank’s stock, and private investors purchased the rest of the stock.

Congress also approved Hamilton’s suggestion to levy a 25% tax on whiskey, placing the payment burden on farmers, who paid the tax when they delivered grain to the distillery. Starting in 1791, farmers on the western edge of several states petitioned Congress for relief. After winning only small concessions, they mounted increasingly aggressive demonstrations against the tax. Unrest escalated in July of 1794, when 7,000 farmers marched toward Pittsburgh to protest the whiskey tax. President Washington and Secretary Hamilton led 13,000 soldiers to Western Pennsylvania to quell the rebellion. When forces arrived in September of 1794, the demonstrators were gone. Two men were convicted of high treason but Washington later pardoned them. Even after the government put down the rebellion, the whiskey tax proved difficult to collect, and Congress repealed it after Jeffersonian Republicans came to power in 1800.

Taxes, custom duties, and many other means of generating revenue bred resentment among citizens long before the Revolution, yet Congress had to find ways to collect the revenue required for the government’s operation. Despite the best efforts of Congress and others, however, Americans have never embraced taxes. In fact, most still look upon them as, at best, a necessary evil.

Onuf, Peter S. Statehood and Union: A History of the Northwest Ordinance. Bloomington: Indiana UP, 1987.