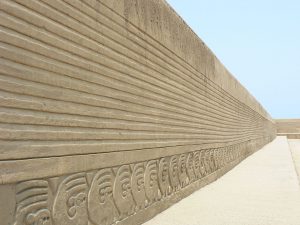 Following the decline of the Moche on the north coast of Peru, there arose two cultures in their place. One was the Sicán (or Lambayeque), beginning around 750 in the northern part of the old Moche territory in the Lambayeque and La Leche river valleys. The other was the Chimú, who began to flourish around 950 in the Moche valley (around the Moche River) and spread both north and south, eventually conquering the Sicán around 1375 and expanding almost as far as Lima. The Chimú kingdom, called Chimor, came to a close with their conquest by the Inka. 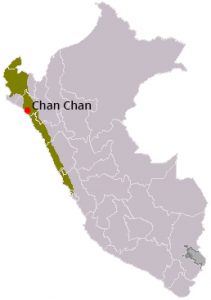 Map of the Chimor kingdom at its largest extent (Huhsunqu, CC BY-SA 2.5)

The capital of the Kingdom of Chimor was the city of Chan Chan, located in the Moche river valley, closer to the coast than the Moche culture’s center at the Huacas del Sol and de la Luna. Chan Chan was composed of royal compounds, today referred to as ciudadelas or citadels. These citadels were elaborate, labyrinthine compounds surrounded by high walls made of adobe bricks covered in mud plaster and reliefs.

Ciudadelas were composed of long, narrow corridors leading to spaces with different uses, such as large, open plazas with central platforms for ceremonies, storage facilities, and even large wells. It would be difficult for someone unfamiliar with the citadel to navigate their way through, and so the architectural design provided a kind of security in addition to the presence of guards and court officials.

The citadel was a royal household, audience chamber, and storage facility during the life of the king, and his tomb upon his death. Each new king would build a new citadel, as the old king was buried in his. A new king would begin from square one, needing to build his wealth and his citadel, along with his reputation. This may have been one reason for the steady expansion of the kingdom of Chimor: the need for new sources of wealth for new kings. 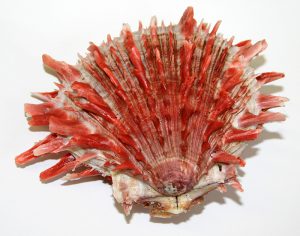 Chimú kings had access to high-quality textiles made with dyed camelid wool, gold- and silversmiths who made fantastical jewelry as well as delightful miniatures of everyday objects, and exotic feathers and shells. The feathers came from the cloud forests of the Andes as well as the Amazonian jungles that lay beyond, and Spondylus shells were brought from the warm waters of modern-day coastal Ecuador. The king of Chimor had in his retinue a servant called the Fonga Sigde, whose job it was to strew crushed Spondylus powder before the king as he walked, creating a “red carpet” for him to walk on and showing his extreme wealth and power. 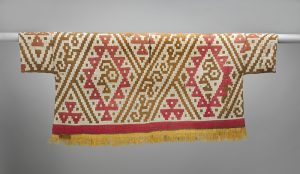 Because of the legendary wealth of the kings of Chimor, the cuidadelas of Chan Chan were mercilessly looted beginning with the fall of the Chimú empire to the Inka around 1470, and very few objects have been recovered scientifically from the site. There is, however, a great deal of conservation and restoration work going on at the site, and other sites have yielded a wealth of Chimú objects, including the Moche pyramids of Huaca del Sol and Huaca de la Luna, which are less than three miles away. The Chimú may have seen these structures as belonging to revered ancestors, and therefore spiritually powerful and an appropriate place for their own dead. 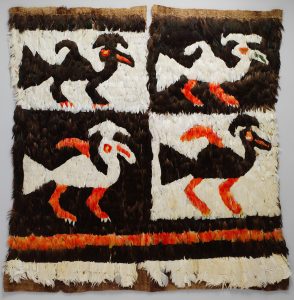 Chimú tunics varied in quality from plain, undyed cotton in natural colors to brilliantly-colored dyed camelid wool, (above) and eye-catching, exotic feathered tunics (left). Both of the tunics shown here feature bird designs, but the one above is heavily abstracted. The bird can be seen inside the large pink diamond shapes, reduced mainly to a large beak, round head with its eye, and two triangles for the body and tail. Heavily geometric designs like this one were common in Chimú textiles, although some are more naturalistic. The feathered tunic’s birds are easier to see. They were created by carefully tying rows of trimmed feathers to a plain textile backing. Despite their relative clarity, they are still similar in shape to those in the textile tunic. The plainest textiles would have been worn by the common people, with more elaborate creations like the ones seen here worn by the elites. The king was entitled to wear the most luxurious articles of clothing, distinguishing him from everyone else. 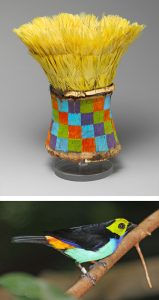 Feathers were also used to decorate crowns. The conical shape would be constructed of a basketry base, then decorated with feathers and other ornaments (in this case with copper bands at the top and bottom of the base). Art historians have identified the feathers as coming from the paradise tanager and the macaw, both birds that live in the dense tropical jungles to the east of the Andes mountains. The brilliant colors and exotic origins of the feathers signaled the ruler’s ability to procure luxury items from far away. 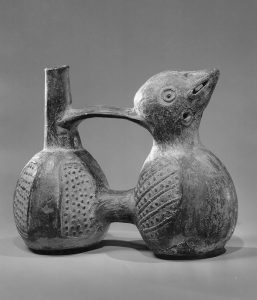 Chimú ceramics are very different from those of the Moche that preceded them. They are less sophisticated in execution, and usually are not painted, relying solely on modeled form and surface textures for their decoration.

The vessel below is a double chamber type that is common to Chimú, where two hollow forms are joined by a tube at the bottom and a strap handle at the top, with a more or less cylindrical spout sticking straight up from one chamber. In some cases, the vessel has been engineered so that pouring liquid out of it or sloshing the liquid around inside it will force air through a whistle inside one chamber, causing the pot to make a sound when it is used (audio of this vessel whistling can be found here). These vessels were fired in a kiln deprived of oxygen (referred to as a “reducing atmosphere”), causing the iron compounds in the clay to turn black. The general term for Andean ceramics made this way is “blackware.” 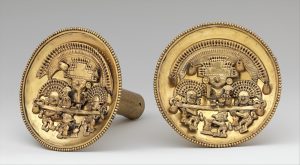 Chimú metalsmiths made many different kinds of objects. The earspools seen below would have been worn by a ruler or very high-ranking noble. They depict a man, probably a king, holding a beaker and a feather fan, carried on a litter by other figures. He wears a large headdress topped with a broad crescent of feathers, with a stepped ornament at the center. He wears earspools and a tunic with a fringed hem. Trapezoidal sequins dangle from wire loops on the surface of the earring, and would have shimmered as the wearer moved, adding further splendor to the object. 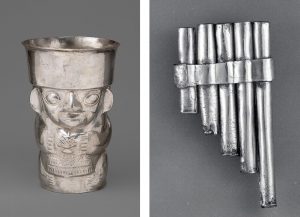 Metalsmiths also made silver and gold beakers, similar to those made by the Sicán. The figure in the beaker seen here holds a tunic with a bird design. The Chimú also made miniature metal versions of objects—household goods, musical instruments, even fruits. The tiny (2.7 x 5.6 cm!) panpipes to the right would have been included in a tomb as a precious, more durable version of an instrument normally made of reed. 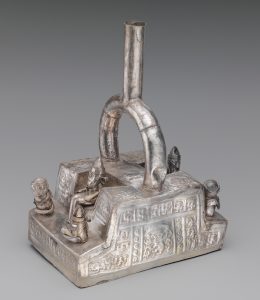 In the ultimate statement of luxury, rulers also had silver versions of ceramic vessels made for them. The one below depicts a ruler seated on a throne that is decorated with birds, waves, and a supernatural figure, similar to thrones and adobe reliefs found at Chan Chan. Two attendant figures are seated below him. The design is repeated on the other side. The ruler figure is larger than those below him, emphasizing his power just as much as the elaborate repoussé that defines the throne. One subject figure on each side is carrying a bag, perhaps filled with tribute for the king of Chimor. The stirrup spout for the vessel shows that the Chimú continued some elements of Moche style.

Treasures from the ocean

Chimú jewelry included not only metals and beads of precious stone but also shell. The red-orange Spondylus shell that was crushed for the king to walk on was also used to make beads, as were other shells, which produced purple, yellow, and white beads. The wrist ornament below is one of a pair, to be worn like cuffs. The rich colors echo those of high-status dyed textiles and exotic feathers. A ruler wearing these cuffs, a brilliantly colored tunic, a tall, colorful crown, and shiny gold earspools must certainly have been an intimidating sight, inspiring awe of the power of Chimor in all who witnessed him. 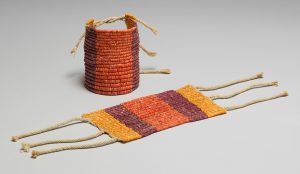 The conquest of the Kingdom of Chimor by the Inka around 1470 brought the age of luxury on the coast to an end. The artists and craftsmen of Chimor were taken to Cusco to make elite goods for the Inka nobles, and the ciudadelas were sacked and plundered. Further looting would take place over the centuries, leaving only the massive adobe architecture as a reminder of the might of the Chimú kings.