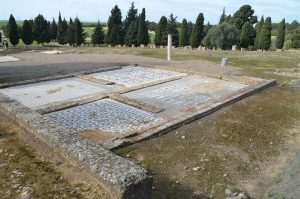 Italica is a well-preserved Roman city located in modern-day Santiponce, 9 kilometres north of Seville in Spain. The city was founded in 206 BC during the Second Punic War (218-202) when the Roman commander Publius Cornelius Scipio settled his Italian veterans on this site following a victory at the Battle of Ilipa. Although the nearby town of Hispalis (Seville) would always remain a larger city, Italica became an important centre of Roman culture and was awarded the title of colonia. The name Italica reflected the veterans’ Italian origins. 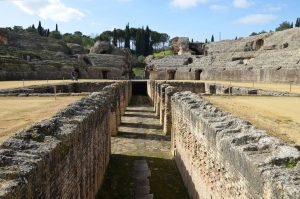 Much of the earliest neighborhood, the vetus urbs (old city), established by Scipio during the city’s founding now lies beneath the modern town of Santiponce. The new city which can still be seen today, known as the nova urbs, was built by Hadrian as an extension of the vetus urbs. In the second half of the 1st century BC, Italica acquired municipal status and, under Hadrian, at the request of the city itself, it was raised to the rank of colonia, with the title Colonia Aelia Augusta Italica. The families of emperors Trajan and Hadrian originally came from Itálica (the patria of the Ulpii and Aelii) as did many Senators of the time.

Hadrian rebuilt Italica on the scale of an imperial city, comparable to the capital of a whole province. In Hispania, only Corduba, Tarraco and Emerita surpassed Italica. Under his rule, Italica enjoyed a period of splendour during which its architectural development flourished with the construction of new public buildings such as the amphitheatre, the baths, the theatre as well as luxurious houses with a rich variety of mosaic floors. About twenty intricate mosaics lie amongst the uncovered ruins still in situ (the remainder are in the Archaeological Museum of Seville or in private hands) and their decorative themes provided the name for many of the buildings that can be visited today. 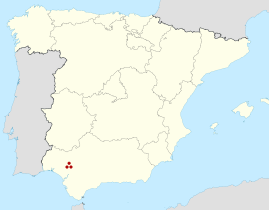 The whole plan of the city was lavish, the main avenue being nearly 15 metres wide with porticoed pavements. Other streets, of half that width, were flanked by footpaths laid out on an orthogonal plan. Hadrian provided the town with a water supply system and a drainage network. Running water was brought in via an aqueduct to cisterns before being distributed through a network of pipes. The amphitheatre was one of the largest in the Empire, 160 by 197 metres. It was built of large blocks of hewn stone and brick faced with marble and could accommodate some 25,000 spectators.

Italica rose to considerable military importance in the 2nd century AD. However at the end of the 2nd century AD the city began to decline for political and economic reasons and was gradually abandonned, with its most emblematic spaces losing their functionality. Throughout the Middle Ages, the ruins were used as a source of stone for Hispalis (Seville).

The archaeological site of Italica is one of the most important sites of Andalusia’s archaeological heritage which allows the visitor to gain a vital insight into Roman town planning. There is a superb collection of sculptures from the excavations in the Archaeological Museum of Seville. The smaller finds, carved gems, glass, and ceramics are dispersed among various museums and private collections, notably the Lebrija Collection.