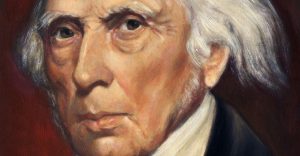 War emergencies, Madison argued, were tests to obey the Constitution, not ignore it.

Is it possible for a president to run a war effectively and obey the Constitution at the same time? Most historians would say no; after all, they persistently rank Abraham Lincoln and Franklin Roosevelt as two of the nation’s greatest presidents. Lincoln and Roosevelt, as war presidents, centralized power, restricted liberty, and suspended key parts of the Constitution during their stints in office. Historians like men of action, especially when these actions seemingly help win wars.

However, James Madison, the first war president in U.S. history, did not set such a precedent. War emergencies, he argued, were tests to obey the Constitution, not ignore it. His conduct in the War of 1812 is illuminating, and worth reviewing.

The War of 1812 was peculiar in that the United States was not under attack, or even the threat of attack. Many, therefore, have argued that the war was avoidable. American commerce, however, was being restricted by the Napoleonic Wars between France and Great Britain. Furthermore, Britain was seizing American ships, kidnapping (“impressing” as it was called) sailors, and stirring Indians in the Northwest to launch raids on American soil.

In the diplomacy that led to war, Madison did not hold press conferences or buttonhole senators. He let Congress debate the problem and pass laws to deal with it. Macon’s Bill No. 2, which Congress passed and Madison decided to sign, guided our policy in the two years before war. It offered peace and trade to either France or Britain if either would leave our trade unhampered.

When Britain persisted in halting American ships and seizing the sailors, Madison believed the United States should go to war. But he did not act on this belief until Henry Clay, leading a delegation of congressmen, urged him to support the war publicly before Congress voted on it. This Madison did, and Congress voted (79–49 in the House and 19–13 in the Senate) to go to war.

Once war was declared, it had to be funded. The previous year, Congress had refused to re-charter the Bank of the United States, and so the nation had no central bank to borrow from. Direct taxes were another possibility for raising money, but Madison avoided them during much of the war.

Instead, Madison, as commander-in-chief, worked with Congress to finance the war in part by privatizing it. The navy, for example, lagged far behind Britain in ships and manpower. Therefore, Madison urged private shippers to attack Britain, from the American coast to the British Isles. An estimated 526 merchants-turned-hunters stalked and attacked vulnerable British ships, commercial or naval. Any profits, from cargo or ransom, were split among captains and crew.

Some of these private ships were sunk quickly by the British, but others pestered and perplexed their enemies. The Yankee, from Bristol, Rhode Island, and the American, from Salem, Massachusetts, each won over $1 million in booty. Thomas Boyle, of Baltimore, took his Comet into British waters and won 40 hit-and-run skirmishes, and then outrageously declared Britain to be blockaded. America’s mosquito fleet demoralized the Royal Navy and forced Britain to convoy all of their trade in the Atlantic Ocean.

The U.S. army, of course, needed cash for troops and arms. Madison, as co-author of The Federalist Papers, was suspicious of centralized power and argued persuasively for limited government at the constitutional convention. He tried to avoid taxing to support the war, calling it a dangerous precedent and a recipe for waste and a permanent bureaucracy. Instead, he worked with Congress and the Treasury to float about $80 million in government bonds; he urged private citizens to invest in their troops, and he funded most of the war doing that.

In an emergency bond drive in 1813, after a series of U.S. military defeats, four immigrants stepped up with over $9 million in cash to keep their adopted country in the fight. These men—German-born John Jacob Astor and David Parish, French-born Stephen Girard, and English-born Alexander Dallas—risked their wealth to defend the liberty they had used in building their fortunes.

During the war the army lost many battles, and some critics have faulted Madison for appointing weak generals. It’s true that the Canadians captured Detroit, defended Niagara, and repelled American advances on Canadian soil. Then British troops, fresh from defeating Napoleon, invaded America, burned the White House, and chased officials out of Washington, D. C.

But Madison recovered well. He had at first appointed veterans of the Revolutionary War, men who were senior officers. They did poorly. But by the summer of 1814, he had younger men in charge, and the United States lost no major battle after that.

Madison handled adversity in a way that preserved individual liberty. When political opponents attacked him for military setbacks, he never jailed them, deported them, or shut down their newspapers—as did future war presidents. Even when hostile Federalists met to consider secession, Madison never interfered with their civil liberties, or those of anyone else. He asked aliens to register, and that was it.

Fighting a constitutional war was sometimes awkward and disjointed, but it ultimately succeeded. Madison, who had been second-guessed during the fighting, was commended afterward. His decision to conduct the war in an atmosphere of liberty had helped unify the nation and it proved popular at the polls. His Republican Party gained seats on the Federalists in the off-year elections in 1814. Two years later, James Monroe, Madison’s loyal secretary of state, won the presidency in a landslide that caused the embarrassed Federalists to virtually disband as a political party.

In Madison’s last year in office, he supported a revenue tariff, not direct taxes, to help pay back the loyal immigrant bondholders. Within 20 years, not only was the war paid off but so was the entire national debt. The federal government was returning a surplus to the states.

Marshall Smelser, a historian of the early Republic, ably summarized Madison’s war presidency this way: “Madison’s conduct has brought him condemnation as a weakling. Actually, the father of the Constitution was following his conviction that policy must rise from the people through their branch of government. . . . It is hardly a mark of weakness to take a firm view of the nature of the Constitution and to operate from it as a principle.”