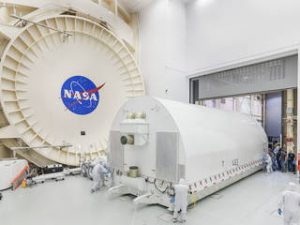 The James Webb Space Telescope is pushed into the clean room of Building 32. Building 32 houses Chamber A, the thermal vacuum chamber where the telescope will have its final thermal vacuum testing. / Photo by Chris Gunn, NASA

NASA’s James Webb Space Telescope has arrived at NASA’s Johnson Space Center in Houston, Texas, where it will undergo its last cryogenic test before it is launched into space in 2018.

The telescope was loaded onto a trailer truck from NASA’s Goddard Space Flight Center in Greenbelt, Maryland, and moved slowly down a highway by the Webb team to Joint Base Andrews in Maryland. At Andrews, the entire tractor-trailer, with telescope inside, was driven into a U.S. Air Force C-5C aircraft and flown to Ellington Field in Houston, Texas.

When the C-5 landed at Ellington, the cargo was carefully unloaded and trucked to NASA Johnson, where inside a cleanroom the telescope was removed from its special shipping container. In the coming weeks it will be prepared for a key cryogenic test that will run nearly 100 days.

To ensure the telescope’s optics will operate at its frigid destination 1 million miles out in space, it must complete tests at cryogenic temperatures in a vacuum. The biggest and final cryogenic-vacuum test occurs in Johnson’s Chamber A, the same vacuum chamber where Apollo spacecraft were tested. This test is critical in that it will verify the performance of the whole telescope as a system end-to-end at its extremely cold operating temperatures. Subsequently, the telescope will continue on its journey to Northrop Grumman Aerospace Systems in Redondo Beach, California, for final assembly and testing with the spacecraft bus and sunshield prior to launch in 2018.

The James Webb Space Telescope is the world’s most advanced space observatory. This engineering marvel is designed to unravel some of the greatest mysteries of the universe, from discovering the first stars and galaxies that formed after the big bang to studying the atmospheres of planets around other stars. It is a joint project of NASA, ESA (the European Space Agency) and the Canadian Space Agency.

For more information about the James Webb Space Telescope, visit:  jwst.nasa.gov or www.nasa.gov/webb