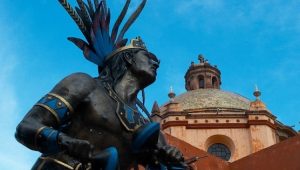 The criminals behind the destruction of a sacred millenia-old temple claimed they were serving god.

The attack on the more than 7,000 year-old Makonikha sanctuary in the central Mexican state of Hidalgo destroyed at least a dozen stone structures used as altars in the spirituality of the Otomi Indigenous people.

Jehovah’s Witnesses have fessed up to being behind the destruction of the stone altars, but have not taken responsibility for a hole that has reportedly been drilled in the base of a pyramid at the San Bartolo Tutotepec archeological site.

Members of the Christian sect say the destruction was motivated by a belief that the ancient Indigenous religion involved devil worship. The perpetrators claim that they were following the word of god by destroying the temple site.

The ancient religion of the Otomi people traditionally holds sacred various deities including earth, water, and fire, and reveres their gods with offerings.

According to anthropologists cited by the Mexican daily La Jornada, Mayonikha for the Otomi — whose territory spreads across central Mexico in at least eight modern-day states — is comparable in significance to Mecca for Muslims or the Vatican for Catholics.

It remains unclear when the Jehovah’s Witnesses carried out the vandalism or how they gained access to the sacred site, protected by local Indigenous people with access only granted to worshippers.