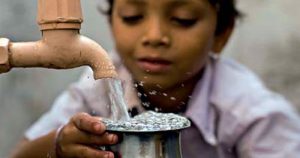 India’s spiritual leaders are asking for a change of priorities.

A greater number of people die each year as a result of unsafe drinking water, poor sanitation and insufficient hygiene than those who tragically lose their lives to war, terrorism and other forms of overt violence[1].

Seeing this ‘hidden’ crisis as a vital call for peace building in the world, a global interfaith alliance, the WASH Alliance (GIWA) was launched in September 2013 to catalyse awareness and action on this issue, particularly through the collaboration of progressive faith leaders.

GIWA’s mission is to help create a world in which access to safe drinking water, improved sanitation and proper hygiene is available to all, and in which a lack of adequate WASH (Water, Sanitation and Hygiene) becomes, in itself, an act of violence.

Of the one billion people in the world who have no toilet, India accounts for nearly 600 million and Narendra Modi, India’s prime minister says building toilets is a priority over temples. 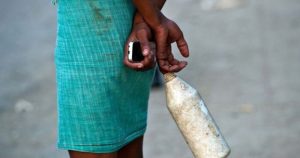 Toilets are spiritual too

“As faith leaders and peace builders, it is not our job to discriminate suffering and death in terms of their cause, with the idea that one is more deserving than the other,” says Sadhvi Bhagawati Saraswati, Secretary General of GIWA and a Jewish-born devotee of Pujya Swami Chidanand Saraswatiji.

“Inadequate WASH (Water, Sanitation and Hygiene) is creating a situation in which our definition of peace needs to expand. We need to see working on WASH as a path to greater peace in many parts of the world,” adds Sadhviji.

While the challenge may be complex, the solutions are within our reach and most importantly we can all be part of the journey to make them a reality, believes Pujya Swamiji. 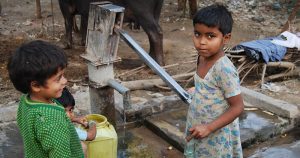 Inadequate WASH is creating a situation in which our definition of peace needs to expand.

The worst drought in recorded history

According to recent figures, one in ten people today live without access to clean drinking water, and one in three lack access to a toilet. The majority of these people live in developing countries. In such conditions water-borne diseases such as typhoid, dysentery and cholera become rife as a result of open defecation, which pollutes water sources and food-growing areas. This very challenge can become a solution with compost toilets, which use less water and allow ‘humanure’ to fertilise soil.

Growing levels of drought in many parts of the world, driven by increasing demand, poor water management practices and climate change, are compounding the situation further. This year, India faces its worst drought in recorded history.

“We are facing chronic drought in India today. This year, 200,000 villages are without any sources of water, and 330 million people are affected” said Richard Mahapatra, Managing Editor of Indian environmental magazine Down to Earth, at a National Consultation on Drought held in Delhi this month.

Such conditions affect everyone they touch, but young children are the worst affected. In India alone, an estimated 1400 children under the age of five lose their lives daily as a result of water-related diseases[2]. The malnutrition that results from poor WASH leaves a further 160 million children with irreversible physical and cognitive damage[3]. 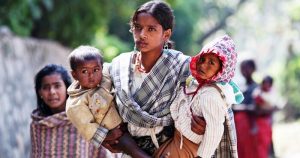 Such conditions affect everyone they touch, but young children are the worst affected.

Gandhi said good sanitation was more important than independence. Through their immense reach and influence globally, faith leaders have a unique role to play in changing mindsets and behaviours. According to a 2012 Pew Research Centre study, 84% of the world population is affiliated with some form of religion.

“The engagement of faith leaders opens the way for millions of people to hear about good WASH practices as part of their accepted way of living through belief and religion,” says Sue Coates, India WASH Chief.

Such influence is especially important when it comes to toilet use. It is common for communities who are used to open defecation to feel uncomfortable using newly constructed toilets, as they frequently carry the perception that doing so is in some way impure.

At the recent Kumbh Mela—one of India’s largest annual Hindu gatherings—GIWA launched a “Swachhta Kranti” (Cleanliness Revolution) campaign to publicize the importance of toilet use, as well as hand washing and water filtration to reduce the incidence of waterborne diseases.

Thousands of flags flew throughout the site, as an estimated 50 million pilgrims came together along the banks of the sacred Kshipra River, in the city of Ujjain, Madhya Pradesh, to worship the Goddess Ganga, in her physical form, water. 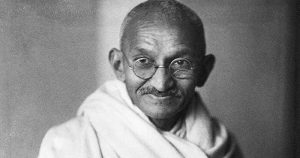 A People’s Movement towards Eco-friendly toilets

Loudspeaker announcements, educational puppet shows, audiovisual presentations and large-scale pledges peppered the events. News broadcasts were made on national TV, reaching thousands of people, and three WASH education stations were set up at key sites, where those attending the Kumbh could learn about good WASH practices and even sign up to be ambassadors in their own villages.

“We had more than 60,000 people sign up to become ambassadors over four weeks. It’s empowering for people to engage in this initiative, and to take all that they have learned back to their communities,” shared Jonathan Fae, UPLIFT’s technical director, who was there to support the campaign.

“We have open defecation occurring in our village. We know it is affecting the health of the village. I will apply to have toilets installed in some homes now I know how to do it. I am proud to be an ambassador for my village,” said Babloo Mistri, one of the newly signed up Swacchta Kranti Ambassadors from Tarod village, in Madhya Pradesh.

Alongside such ongoing awareness-raising and educational efforts, GIWA’s activities to date have focused on building eco-friendly toilets and providing water filters in areas of need, planting trees to preserve and restore water resources, and responding to natural disasters with immediate WASH assistance. 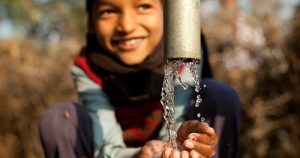 It’s empowering for people to engage in this initiative, and to take all that they have learned back to their communities.

Building a Coalition of Compassion

Poor water availability and sanitation is an issue that calls all of us to unite in finding solutions. Just as we are all touched by water daily, we can all have an impact on its availability, quality and quantity.

For this reason, GIWA places a strong emphasis on partnership building, through the creation of a ‘Coalition of Compassion’, says Sadhviji: “No NGO, including ourselves, can address this problem alone, but together, we can have a big impact. I see us solving as much as we can on a logistical level, but more than this, catalysing a WASH revolution together.”

Over the last three years, this small coalition has gained a great deal of momentum, gathering partners from the world’s major faith networks, alongside governments, business, educators, artists and civil society, and presenting together at forums across the world. 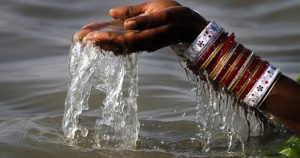 Just as we are all touched by water daily, we can all have an impact on its availability, quality and quantity.

“All faiths must come together to promote an end to open-defecation and a clean and healthy India, because cleanliness, purity and respect for nature are embedded in every religion,” shared Sunni Leader, Chief Imam Umer Ahmed Ilyasiji, President of the All India Imam Organisation.

Such changes would have a major economic impact too. UNICEF estimates that through providing basic WASH facilities to all those in need, the world would save around US$263 billion a year[4].

Whether you are religiously inclined or not, one of the most important messages that GIWA is bringing to the world today with increasing volume, is that water, sanitation and hygiene issues are an invitation for all of us to engage in peace building.

“We would all wish to be able to bring peace to the Middle East, to warring tribes, and to the multiple conflict zones that exist in the world today. But most of us in the roles we play in this lifetime don’t have that opportunity. What we do have an opportunity to do is to support those who are suffering and losing their lives due to lack of WASH,” says Sadhviji.

To find out more and get involved, visit: http://washalliance.org/how-you-can-help/.

You can also show your support by signing their One Million Signature campaign here: http://washalliance.org/signature-campaign/