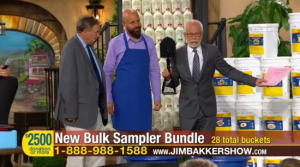 On Friday, televangelist Jim Bakker urged his viewers to buy his buckets of survival food, such as the “Tasty Pantry Deluxe Food Bucket,” because it may be impossible to find food after American cities are swept up in anti-Trump riots.

“We are in the Last Days,” he said. “If you want to be safe and there’s rioting in your street, what are you going to do? Is your mom going to walk down through where they’re burning and killing and all?”

Bakker’s cohost Sasha Volz said she knew people who lived in the Bay Area who said that due to anti-Trump protests in Oakland, it wasn’t safe to “go outside,” “drive down the street” or “go out and buy food for themselves and their family—luckily, that family does have food in their home.”

Buy food buckets now, she said, “before these riots come to a neighborhood near you.”

Bakker added that God told him that such riots were coming: “We’re having a civil war. This is what God spoke to me before: a civil war between good and evil. These people, I don’t know how they can get by with what they’re doing.”

“Things are going to happen and we must be prepared for what’s coming on the earth,” Bakker continued. “The war is going to get greater. Warfare is coming, God spoke that to me this morning, today. A civil war between good and evil. The Revelation days are here, praise God!”