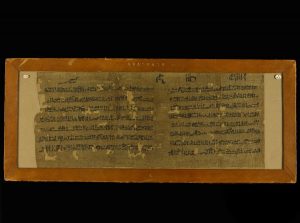 Prayer to Thoth for skill in writing. The prayer is written in hieratic script, found at Thebes sometime prior to c. 1830 CE, and purchased by the British Museum in 1839 CE from the collector Giovanni Anastasi.

The Prayer to Thoth for Skill in Writing is a literary piece dated to c. 1150 BCE from the latter period of the New Kingdom of Egypt (c. 1570-1069 BCE) in which a young scribe prays for inspiration to Thoth, god of wisdom and writing. The prayer was found among the works of Papyrus Anastasi V, a papyrus scroll discovered at Thebes. The prayer is an interesting glimpse into how the profession of the scribe was viewed by the ancient Egyptians and what one hoped to gain by that occupation.

Writing in ancient Egypt was considered a sacred profession. The Egyptian phrase for their writing system was medu-netjer, “the god’s words” which was translated by the Greeks as hieroglyphics (‘sacred carvings’). Writing was believed to have been given to humanity by the god Thoth, a deity first appearing in the Predynastic Period in Egypt (c. 6000 – c. 3150 BCE) before writing developed. In his early representations Thoth is a god of wisdom and knowledge, and so it was only natural that once writing developed it would be credited to him.

Thoth’s consort was the goddess Seshat (sometimes his wife, sometimes daughter) who preserved all forms of the written word among her many other responsibilities. It was Thoth, however, who inspired writers to do their best and create the works which Seshat would receive in ethereal form and place on the shelves of the library of the gods. The written word, therefore, could make one immortal; not only on earth in the remembrance of what one had created but in the realm of the gods where those works would endure eternally.

The scribes who wrote the literature of ancient Egypt – as well as non-literary texts – were highly respected and lived comfortable lives. Men and women could both be scribes, but unless one were nobility or upper class, education was expensive and families who had to choose between educating sons or daughters routinely chose their sons. Historian and Egyptologist Margaret Bunson writes:

Scribes were the literate elite of ancient Egypt who assumed a variety of functions in the various historical periods in government and religious institutions. Some scribes attained high rank and honors and the profession was always esteemed. In one ancient document the life of the scribe is called the “path of the god”. Literacy was the prerequisite for any higher secular or religious office. (236) 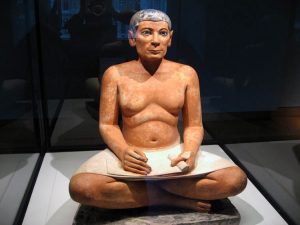 Training to become a scribe took years of education and hard work in memorizing the over 800 hieroglyphic symbols and practicing writing them correctly. This daunting instruction seems to have deterred and discouraged many from pursuing it, but once one had mastered the art, one was almost guaranteed a very comfortable life. Scribes could become doctors, priests, teachers, or simply take a position in government as a secretary or accountant. Egyptologist Rosalie David writes:

Boys intended for careers as scribes (including doctors and lawyers) or civil servants were sent to temples or centers of administration where they would receive personal tuition from a senior official. In addition to reading, writing, and the study of literature, specialist subjects such as foreign languages for future officials of the diplomatic service were taught. (206)

The relationship between the teachers and the young scribes in ancient Egypt seems to be remarkably similar to the present day. Teachers would recite texts and assign work, lecture and grade work, and students would try as hard as they could to get out of doing any of it. There are numerous complaints recorded by teachers on the lax habits of their students and, as David notes, “their teachers certainly complained about their laziness and drinking bouts” (206).  The scribes-in-training needed all the help they could get to master their lessons and relied on the inspiration provided by Thoth when their own ingenuity failed them.

The Prayer to Thoth for Skill in Writing may have grown out of the scribal schools as the speaker seems to be young, but this may simply be a literary device. The purpose of the hymn is to invoke Thoth’s inspiration in writing, and it is possible that the youthful tone of the speaker is supposed to symbolize the helplessness of any writer struggling to create a worthwhile piece or improve in the craft.

The power of the scribe and the prestige it bestowed is evident throughout the hymn from the second stanza to the concluding line. The scribe’s profession is considered the best, it makes one immortal (“great”) and guarantees remembrance, it empowers one to govern others (“in the council of the Thirty”), and it enables one with wisdom to offer sound advice to those who need it.

An interesting line in the hymn alludes to Shay and Renenwetet, Egyptian deities associated with destiny. Shay was the personification of fate and Renenwetet, although originally a goddess of nursing and rearing children, came to be associated with the concept of being able to tell a child’s future. When the speaker says, “Shay and Renenwetet are with you,” it means that the fates, whom no one could control, were at the service of Thoth whose gift of writing could bend the fates to make one successful. This interpretation is supported by the following lines in which the speaker pledges to be a servant in Thoth’s house to learn his skill so that “the multitude of men” will admire the speaker’s work and will even encourage their children to follow in the profession.

The Prayer & the Scribal Profession

The prayer is written in hieratic script, found at Thebes sometime prior to c. 1830 CE, and purchased by the British Museum in 1839 CE from the collector Giovanni Anastasi whose name now defines the papyrus scroll it was written on, Anastasi V. The prayer reads:

Come to me, Thoth, O noble Ibis. O god who longs for Khmunu, O dispatch-writer of the Ennead, the great one of Unu. Come to me that you may give advice and make me skillful in your office.

Better is your profession than all professions. It makes men great. He who is skilled in it is found fit to exercise the office of magistrate. I have seen many for whom you have acted and they are in the council of the Thirty, they being strong and powerful through what you have done. You are the one who has given advice. You are the one who has given advice to the motherless man. Shay and Renenwetet are with you. Come to me that you may advise me.

I am the servant of your house. Let me relate your prowess in whatever land I am. Then the multitude of men shall say “How great are the things that Thoth has done.” Then they shall come with their children to brand them with your profession, a calling good to the Lord of Victory. Joyful is the one who has exercised it. (Lewis, 255)

The concluding line about the joy a writer experiences in the craft is shared by other ancient Egyptian works, most notably The Satire on the Trades from the Middle Kingdom (2040-1782 BCE) and the work commonly referred to as A Schoolbook or Be a Scribe from the Papyrus Lansing of the New Kingdom of Egypt.

The Satire on the Trades is a monologue delivered by a father to his son as they make their way to the school where the boy is to be enrolled. The father encourages his son to embrace learning and to “set your heart on books” because the profession of the scribe is better than any other occupation and is “the greatest of all callings/There’s none like it in the land” (Lichtheim, 185). The life of the scribe is contrasted with the lives of others in such jobs as carpenter, barber, reed-cutter, potter, farmer, etc. and how difficult those jobs are, how hard a life those people endure. 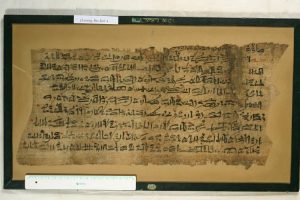 The Papyrus Lansing is an anthology of texts praising the profession of the scribe, dating to the New Kingdom of Egypt.

The scribe, on the other hand, enjoys a life of leisure and wealth. As the father tells his son, “no scribe is short of food/And of riches from the palace” (Lichtheim, 191). The father also counsels his son on how to comport himself once he becomes a scribe and what kinds of behavior he should avoid. Although some scholars (Heick, for example) have claimed the piece to be serious literature, most accept it as satire. Egyptologist Miriam Lichtheim, to cite one, writes, “the unrelievedly negative descriptions of the laboring professions are examples of humor in the service of literary satire” (184). As with any satire, however, the piece makes a serious point: the scribe really did have a much higher quality of life than those in other professions.

The work from the Papyrus Lansing, composed hundreds of years later, makes precisely the same point. A Schoolbook is a lecture delivered by a teacher to his student in which he chides the child for being lazy, dull-witted, and obstinate while encouraging him to take his studies seriously. The life of a scribe is again contrasted with other professions which are all found wanting. The scribal profession, the teacher says, is the only one worth pursuing because it leads to a life of leisure, wealth, and honor.

These are not the only works praising the life of the scribe, but they are the best known and most complete. The gift of writing given by Thoth was taken extremely seriously by the ancient Egyptians, and those who chose to make that gift their life’s work were rewarded handsomely in material goods, respect of the community, and even immortality. The Prayer to Thoth for Skill in Writing was not just a literary or religious piece venerating Thoth but a sincere portrait of the scribe’s desire to create the best work possible in pursuit of the most noble profession.