NASA is on a journey to Mars, with a goal of sending humans to the Red Planet in the 2030s. That journey is already well under way.

For more than 40 years, the agency and its partners have regularly sent orbiters, landers and rovers, dramatically increasing our knowledge about the Red Planet and paving the way for future human explorers. The Curiosity rover has gathered radiation data to help us protect future astronauts, and the upcoming Mars 2020 rover will study the availability of Martian resources, including oxygen.

There is more to learn as we expand humanity’s presence into the solar system: Was Mars once home to microbial life or is it today? Can it be a safe home for humans? What can the Red Planet teach us about our own planet’s past, present and future?

Building on the robotic legacy, the human exploration of Mars crosses three thresholds, each with increasing challenges as humans move farther from Earth: Earth Reliant, the Proving Ground, and Earth Independent. 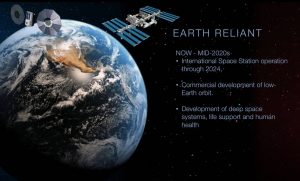 Earth Reliant exploration is focused on research aboard the International Space Station. The orbiting microgravity laboratory serves as a world-class test bed for the technologies and communications systems needed for human missions to deep space. Astronauts are learning about what it takes to live and work in space for long periods of time, increasing our  understanding of how the body changes in space and how to protect astronaut health.

We’re also working with our commercial crew and cargo partners to provide access to low-Earth orbit and eventually stimulate new economic activity, allowing NASA to continue using the station while preparing for missions beyond. 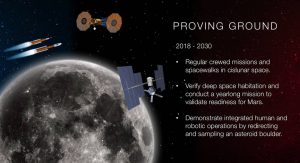 Next, we move into the Proving Ground, conducting a series of missions near the moon  — we call it “cislunar space” — that will test the capabilities we will need to live and work at Mars. Astronauts on the space station are only hours away from Earth, but the proving ground is days away, a natural stepping stone to a Mars mission, which will be months away from home.

The first of these missions is set for November 2018, when NASA’s powerful new rocket, the Space Launch System, will launch from NASA’s Kennedy Space Center in Florida. The mission, Exploration Mission-1 (EM-1), will carry the Orion spacecraft (without astronauts) thousands of miles beyond the moon during an approximately three week mission. Next up, astronauts will climb into Orion for a similar mission, traveling farther than humans have ever traveled before. (Watch Video: Exploration Mission-1).

Also in the 2020s, we’ll send astronauts on a yearlong mission into this deep space proving ground, verifying habitation and testing our readiness for Mars.

Another proving ground milestone is the Asteroid Redirect Mission. NASA will send a robotic spacecraft to capture an asteroid boulder and put it in a safe orbit around the moon. Astronauts on Orion will then explore the asteroid, returning to Earth with samples. This two-part mission will test both deep space spacewalking and sampling techniques and Solar Electric Propulsion, which we’ll need to send cargo as part of human missions to Mars. (Watch Video: Asteroid Redirect Mission) 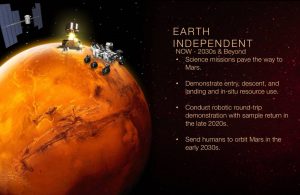 Finally, we become Earth Independent, building on what we’ve learned on the space station and in deep space to send humans to low-Mars orbit in the early 2030s.

This phase will also test the entry, descent and landing techniques needed to get to the Martian surface and study what’s needed for in-situ resource utilization or “living off the land.” NASA is already studying potential “Exploration Zones” on Mars that would offer compelling science research and provide resources our astronauts can use.

Science missions are already in the Independent phase, with the next rover due in 2020. We will also conduct a round-trip robotic demonstration mission with sample return in the late 2020s.

Mars is the next tangible frontier for human exploration, and it’s an achievable goal. There are challenges to pioneering Mars, but we know they are solvable. We are well on our way to getting there, landing there, and living there.