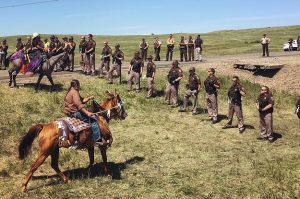 The Nixon White House managed three Indian occupations. There are lessons for President Obama there—if he would just pay attention.

I’ve been thinking a lot about the silence from the White House on the situation at Standing Rock even while North Dakota considers sending in additional law enforcement. There have been so many calls for President Obama to get involved, including a direct plea from Chairman David Archambault II.

On Wednesday, Obama finally spoke, answering a question in Laos. But all he did was cite the stellar record of his administration, then said: “And this issue of ancestral lands and helping them preserve their way of life is something that we have worked very hard on. Now, some of these issues are caught up with laws and treaties, and so I can’t give you details on this particular case. I’d have to go back to my staff and find out how are we doing on this one.

“But what I can tell you is, is that we have actually restored more rights among Native Americans to their ancestral lands, sacred sites, waters, hunting grounds. We have done a lot more work on that over the last eight years than we had in the previous 20, 30 years. And this is something that I hope will continue as we go forward.”

Of course this has been an amazing eight years—or should I say almost eight years. But Obama, who has done more for Native Americans than any other president, had not been briefed and ended up in a deer-in-the-headlights moment.

What should the White House be doing? Ideally, propose a solution.

Yet President Obama’s executive order on tribal consultation is already clear about what should be done. It says: “History has shown that failure to include the voices of tribal officials in formulating policy affecting their communities has all too often led to undesirable and, at times, devastating and tragic results. By contrast, meaningful dialogue between Federal officials and tribal officials has greatly improved Federal policy toward Indian tribes. Consultation is a critical ingredient of a sound and productive Federal-tribal relationship.”

There are thousands of people near the Standing Rock Reservation ready to engage in peaceful civil disobedience and trying to avoid those “devastating and tragic results.” Meanwhile elected North Dakota government officials—who cannot even bring themselves to visit the camp and learn about what’s occurring—have a fundamental misunderstanding about the nature of the protest and are calling for more law enforcement, possibly even the National Guard. All of it makes me think of the Nixon White House.

Some history. Over the years I have interviewed a number of people who have worked in the Nixon White House, during which there were three major crises involving Indian Country: the occupations of Alcatraz, the Bureau of Indian Affairs headquarters, and Wounded Knee. John Ehrlichman and Leonard Garment both told me about the tension between those who would use government power—law enforcement and troops—versus those who wanted to find a peaceful resolution. This is not the full account, of course, but here is the story as remembered by government officials.

Alcatraz was first. The California island was occupied in November 1969 by a group of college students who would form “Indians of All Tribes.” Goals ranged from inter-tribal ownership to the creation of a new university, museum, and cultural center. But the federal government wanted the island back.

“What I sensed,” Garment told the Nixon Library in 2007, “was that the administration did not want any bloodshed. That there was already a lot of trouble in the country. I mean, later on when there was Kent State, I mean, all of these problems were … quite explosive.”

But Bob Kunzig, who was the federal official responsible for the island, wanted the Coast Guard to land on the island and remove students by force.

“When I heard about that,” Garment said, “I said tell him to forget about it. So there was a kind of a little bit of a battle, not a battle royal, a battle royalette, a miniature battle, because he didn’t have the standing to do anything nor did anybody want bloodshed over Alcatraz. So it turned into a very interesting symbolic issue, which worked well for the Indians and it worked well for the administration. It worked well for the processes of history. Because here was Alcatraz, this prison island, lump of rock, and here were these people, Indians, out on the island, and here was the federal government withholding its powerful, its armed fist, and waiting them out. And it was an interesting time, learned a lot, had a lot of people who were very angry, wanted us to provision the island. And it was a way of, sort of, at least for me, of striking a balance between trying to enforce the law and also not to be so heavy handed that we wind up in a mess, in a bloody mess. So that was, that was Alcatraz.”

The same parameters were in place during the BIA takeover. The Nixon White House looked for solutions, one even as unconventional as paying the occupiers to leave town, money that was supposed to be used for people to buy bus tickets home. Garment told me: “We were condemned, investigations were held, hearings, but there was no bloodshed.”

We know from his secret tape recordings that he wanted the White House visible.

Garment said the 82nd Airborne and the Marshals were ready to move in “and that would have been bloody because if they did, there were weapons.” But it was a general, Volney Warner, who talked the White House down. “He just went through what would happen. The number of troops that would be used, the tear gas, the number of deaths that were likely and when he finished there was no more talk about taking them out by force.”

Today, of course, the situation at Standing Rock is different in a frightening way.

Instead of debating the power of the federal government, we’re seeing the use of a private security force who do not answer to the public.

Indeed, one of the problems here is that the owners of the Dakota Access Pipeline cannot wait for a peaceful resolution to unfold. The company’s entire strategy is to build the pipeline fast before the regulatory process can catch up. The company wants banks to know this can be done fast and without political interference, avoiding the kind of delays that killed the Keystone XL pipeline and, more recently the Sandpiper Pipeline.

Energy Transfer Partners was clear about this plan. In May, for example, a spokesperson told The Forum News Service that its “depth of experience and relationship with regulatory agencies has made the company confident enough to start construction before all permits have been granted.”

And the state of North Dakota is eager, too.

Statements by the governor, county officials, and the company all acknowledge that protests are protected by the First Amendment. They also frequently use the word “lawful.” But they see protest as holding a sign, not holding a line. They misunderstand the nature of civil disobedience and the long-term presence of people who are willing to disobey an unjust process and unjust laws. The key to successful civil disobedience is moral authority, not “lawful” slogans.

How much government power will be used to protect the Dakota Access Pipeline? Or will that be a private security force that uses attack dogs and more? Is the state, or the company, willing to kill people to enforce its outcome? As Nixon put it, “if some Indians get shot, that’s too goddamned bad. If some Americans get shot, that’s too bad.”

The White House has two great powers. By paying attention to what’s going on, it can shine a light on the story, the whole story. It can also convene. Bring together the Dakota Access Pipeline executives, the state, the tribes, and make sure that the outcome does not end up a bloody mess.