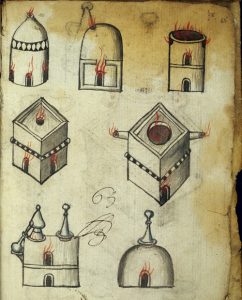 Since late antiquity, alchemical texts have had a reputation for being difficult to read. Besides often being written in Latin, which automatically limited the readership, these treatises employed a hermetic language, following the tradition of the secrecy of esoteric knowledge. Manuscripts containing these texts, some of which are beautifully illustrated, seem to have been intended for the few people initiated in the alchemical art. They are addressed to readers belonging to an intellectual elite, that might experiment with alchemical recipes about how to produce the philosopher’s stone, create the elixir of perpetual youth, or transform base metals into noble ones.

Yet despite the arcane language of alchemical manuscripts, images within them have a practical aim: to help the reader follow the procedure described in the recipe. Therefore, we can find many illustrations of the appropriate ovens, alembics and vessels, such as those in a remarkable late 15th-century French manuscript held by the Wellcome Library, discussed in a previous post.

With the advent of print, some of these treatises became more accessible to readers, even though most of them were still written in Latin and rarely translated into vernacular languages. Furthermore, most of these texts still used their characteristic arcane language. However, another genre of books appeared in the 16th century: printed books of secrets. Like most alchemical texts, these were compilations of recipes, and they shared many ingredients and procedures with alchemical tradition. Nevertheless, they differed from alchemical texts in the sense that they were not specialised books, and they promised to reveal to the reader ‘secrets’ in a simple, straightforward manner.

Originating in Italy, with the publication of the ‘Opera nuova intitolata Dificio di ricette’ (or ‘House of recipes’) in 1525, these books became instant ‘bestsellers’. Written in the vernacular, they offered the reader easy recipes for everyday ‘down-to-earth’ problems. Books of secrets contained all sorts of recipes, from how to preserve fruit to how to dye cloth, make simple medicines, produce cosmetics, and treat sick animals. They were cheaply printed books, and therefore rarely illustrated. Among the miscellaneous recipes, however, there were also alchemical procedures, some of which were accompanied by woodcuts to help the reader to understand the processes involved. 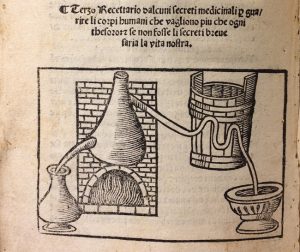 By the time that one of these compilations, the ‘Secrets’ of Isabella Cortese, was published in Venice in 1561, the genre was already a commercial success. In the years following its publication, the ‘Secrets’ was reprinted in Italy 15 times, and translated into German in two editions. The Wellcome Library holds copies of six of the Italian editions, including the first edition of 1561, and also holds a manuscript (MS. 215) that incorporates the text. The reader is told how Isabella Cortese was a noblewoman who had studied alchemy for 30 years before abandoning theory and embracing a practical approach to alchemical knowledge. She became a ‘huntress of secrets’, travelling to Eastern Europe in search of recipes.

It is very likely that Isabella was an invention of Giovanni Bariletto, the Venetian printer of many other books of secrets. Besides being an anagram for ‘secreto’, the surname Cortese gives the author’s name a courtly air, consistent with the narrative of the noblewoman who leaves Italy in an empiric quest for knowledge. This work is the only known case of a printed book of secrets attributed to a woman in early modern Italy. Furthermore, it is addressed to ‘every great lady’, underscoring the gendered aspect of the book – which does not mean that the recipes were of use only to women, or that there were not male readers. Nonetheless, the alchemical recipes in Cortese’s book are mostly connected to medicines and cosmetics which could be produced in the household, appealing to a female readership. The practical character of the book probably explains why the printer decided to include some images of the ovens and containers necessary to follow the complex alchemical recipes, such as the ‘Opera di Canfora’, a recipe for an antithermic. Nevertheless, we may see these illustrations as performing a double function: rendering complex procedures more accessible, and underscoring the importance of the alchemical recipes in the overall compilation. 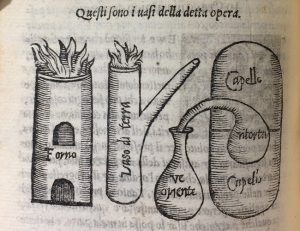 Indeed, the illustrated recipes teach the reader how to produce derivations of mercury and sulphur oil that appear as ingredients in medical recipes elsewhere within the book. Cortese’s ‘Secrets’ indicates that women were beginning to engage in alchemical experiments, using alchemical tools and techniques, to attain domestic goals such as the production of medicines and cosmetics. The gendered element is present both in the attribution of the secrets to a woman, and in the expectation of a female readership eager to read about these secrets.

In the ‘Secrets’ of Isabella Cortese, it is possible to see the operation of a domestic alchemical laboratory. This ‘new alchemy’ was a break with tradition in many ways. Practice was more important than theory, classical authorities were not praised, travel was essential to obtaining the ultimate secrets of the art, and diffusing its secrets to the general public was a noble goal. Cortese’s conception of alchemy is connected to the new culture of testing and experimentation developing in the 16th century. However, what is most interesting about Cortese’s practical alchemy is that its main aim was not to find the cure to all ailments or the secret to eternal life. If most alchemical traditions pursued these lofty ambitions, Isabella Cortese’s secrets were intended to help the reader with much more mundane problems. Indeed, the book conveys a view of alchemy as a practical everyday activity that every woman could pursue in her own kitchen.