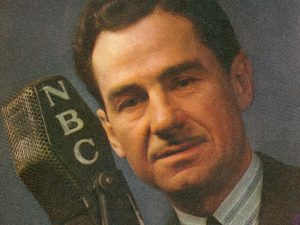 Despite being largely forgotten today, Lowell Thomas was a pioneering journalist of the 20th century who reshaped news media. (Wikimedia Commons)

Lowell Thomas was the first host of a TV broadcast news program, and adopted a number of other new technologies to make his mark in the 20th century.

By the time Lowell Thomas turned 25, he’d already worked as a journalist, earned multiple degrees, and found a place on the faculty at Princeton University. But seizing a rare opportunity during World War I changed him from youthful overachiever to media heavyweight. During that conflict he met T.E. Lawrence, soon-to-be famous as “Lawrence of Arabia”—and Thomas played a large part in giving Lawrence that fame. The encounter launched Thomas into the media stratosphere with a groundbreaking multimedia presentation that captivated millions.

But while Lawrence’s work ended abruptly with his untimely death, Thomas went on to live a long, remarkable life. He traveled Europe, the Middle East, India, Afghanistan, New Guinea and Tibet, even meeting the Dalai Lama. He made fans out of Queen Elizabeth and Winston Churchill and led a prolific career in the news, making reports by print, radio, and TV—and reshaping them all into more formal, serious mediums.

Yet for a man with such a hyperbolic life, his legacy has been largely forgotten. Mitchell Stephens, a professor of journalism at New York University, set out to remedy that lapse in public memory with his new biography, The Voice of America: Lowell Thomas and the Invention of 20th-Century Journalism. Smithsonian.com talked with Stephens about his book, and why Thomas still matters today.

Few Americans today recognize his name, but Lowell Thomas was as well known in his time as any American journalist ever has been. His was the trusted voice that kept Americans abreast of world events in turbulent decades.

Sensationalism was a major part of journalism in the early 20th century, but Thomas helped reshape this. How did he manage that?

The early 20th century was a time when a lot of people “improved” stories. It was a less fact-obsessed world than the one we live in and therefore a less accurate world. Lowell was a pretty sensational journalist in Chicago himself. Lowell got caught making something up in Chicago, but he learned a lesson.

When he got his great gig, hosting what at the time was a network radio newscast, he was aware of the responsibilities that went with it. He helped pioneer a more sober style of journalism. Lowell quickly realized that there were people among his hundreds of thousands and then millions of listeners who would write letters and complain to his network if he got things wrong. Because [the radio broadcast] had so many listeners and he was such a dominant figure, what happened there also spread to other iterations of radio, then TV, then newspapers. Lowell contributed to the fact obsession that journalists have today.

The other aspect [that Thomas helped change] was non-partisanship. Journalism in the United States has historically been an extremely partisan enterprise. Horace Greeley, the great 19th-century newspaper editor, was one of the founders of the Republican Party. Lowell Thomas, who was a Republican, realized he couldn’t make his newscast a Republican newscast because he would lose too many listeners. He wanted to be listened to by Republicans and Democrats and this became the way broadcast news was done in the U.S.

Thomas is maybe best known for making T.E. Lawrence famous, but he also doesn’t seem to have understood him.

Lawrence was a man with a very tangled inner life, probably gay at a time when you weren’t allowed to be. He had a really complicated attitude towards fame. In one sense he pursued it, in one sense he hid from it. Lowell was the opposite. Lowell lived very comfortably on the surface, was very comfortable with himself, with the fame he eventually achieved. So they were an odd combination. Lawrence was disturbed by this crass American fame that this journalist was bestowing on him, fame to the point that people were chasing him down the streets. Lawrence was one of the first media-made stars. That was very difficult for a man of his complications and his difficulties, his fissures and fractures.

Something else that comes up with both World Wars is the thin line between journalism and propaganda. How did Thomas navigate that line?

The line between journalism and propaganda was not well drawn early in the 20th century. Lowell sent himself over to cover World War I shortly after the United States entered it because he was always the man who wanted to be where the action was. He was there in part to publicize and build support for the war—something that we would not want to find journalists doing today. He had the support of the United States government, and when he went to cover events in the Middle East he had the support of the British government. Journalists today do have to work with military and government officials, but he didn’t distinguish between supporting the war and covering it. He was a patriot and didn’t hide that.

In some ways that was important during World War II when—by my calculation—maybe one of every five adults in the U.S. were getting news from this one man. It was a reassuring voice in a very scary time, when a lot of Americans were dying overseas.

Another element of his success is his willingness to adapt to new technologies.

The most important medium for his career was a then-new media, radio. People in America were just buying their first radio sets when Lowell’s voice was heard on them.

We think of this as an age of new technology, of journalists on Twitter, using Reddit and Snapchat and Instagram and so on, but in some ways Lowell was more advanced in his use of technology 100 years ago than any of them. He was early to use a typewriter, he was early on radio, he was one of the first to combine voice with film before sound film had really caught on. And then when sound film did catch up, he was host of the dominant newsreels that were shown in movie theaters twice a week when most Americans would go to movie theaters every week.

He was early up in airplanes. He was the first to take real documentary footage of war. He was early in getting into automobiles, though he was a terrible driver. And then in the start of the 1940s, when television had just been invented and NBC was doing its first experiments in television, who did they get to host what was definitely the first regular TV newscast and probably also the first regular television program of any sort? Lowell Thomas.

His wife Fran traveled with him for much of his work and tried to write her own books, but never succeeded. What was their relationship like?

Like most women at the time, she suffered from the various extant forms of sexism. She was a very bright woman, an educated woman, and there wasn’t much for her to do with that. She went into the career that many bright women went into and became a schoolteacher, but she got swept away on Lowell’s magic carpet. She found himself with him in London, India, Singapore, Malaysia, Australia, New Zealand. She had quite an exciting life surrounded by famous people, but she didn’t really get to use her talents. She made some effort [to write] and Lowell did try to help her but she was unsuccessful.

What can we learn from Lowell Thomas’s story today?

We miss a voice that is known and trusted by such a large percentage of Americans. Lowell was the first of those voices. Walter Cronkite, Edward R. Murrow, and later Tom Brokaw, Dan Rather and Peter Jennings followed him in that role. There is no one that has that status today. There’s no one trusted by as many people, on both sides of the political spectrum. There’s no one who’s nearly as well known as Lowell Thomas. He was one of the most famous men in America. That’s not true of Anderson Cooper; it’s not true of Lester Holt. And there’s nobody that can’t be dismissed by one side or the other as a partisan.

Some of this is good. We get a lot more voices in the news. Lowell Thomas was a white male from a very traditional American background. Now there are a lot of points of view available. That’s mostly a good thing, but we miss this trusted and extremely well known, expected voice.