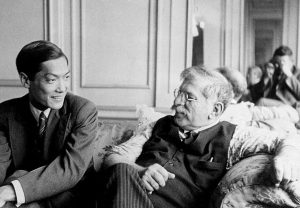 Magnus Hirschfeld, on the right, sits with his partner, Tao Li, at the fourth conference of the World League for Sexual Reform in 1932. / Wellcome Images

Physician Magnus Hirschfeld advocated for those he called ‘sexual intermediaries.’ His activism began before World War I – and ended only when the Nazis came to power.

By Dr. Elizabeth Heineman / 11.09.2018
Professor of History and Gender, Women’s, and Sexuality Studies
University of Iowa

Those opposed to recognizing gender identity sometimes call it a form of “radical gender ideology” or “political correctness” gone too far.

But recognition of transgender identity is no recent phenomenon: Some doctors acknowledged gender nonconforming people far earlier than most might realize. Perhaps the most important pioneer was German physician Magnus Hirschfeld, who was born 150 years ago, in 1868. As a historian of gender and sexuality in Germany, I’m struck by how he paved the way for the legal recognition of gender nonconforming people.

In recent years, the medical and psychological professions have come to a consensus that sex assignment at birth is inadequate for understanding individuals’ sexual and gender identity – and that failure to recognize this fact can have a devastating impact.

Magnus Hirschfeld was the first doctor to openly research and advocate for people whose gender did not correspond with their sex assignment at birth.

But Hirschfeld’s vision extended much further than homosexuality. He defined his specialty as “sexual intermediaries,” which included everyone who did not fit into an “ideal type” of heterosexual, cis-gendered men and women.

According to Hirschfeld, sexual intermediaries included many categories. One type was cis-gendered people who were gay, lesbian or bisexual. Another consisted of transvestites: people who comfortably identified as their assigned sex but who preferred to dress in the clothing assigned to the other sex. Yet others were “trans” in a more radical direction, like those who wanted to live fully as their non-assigned sex or longed for sex-change surgery.

As a gay man, Hirschfeld was aware of the legal and social dangers sexual intermediaries faced.

Since sexual intermediaries often turned to their doctors for help, Hirschfeld worked to educate the medical community. He published medical journals including the “Yearbook on Sexual Intermediaries” and the “Journal of Sexual Science.” In 1919, he founded the Institute for Sexual Science in Berlin to promote further research. 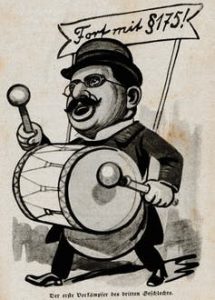 A German cartoon depicts Hirschfeld with the caption ‘The first champion of the third sex.’janwillemsen/flickr

In court he gave expert testimony on behalf of men who had been accused of violating Germany’s law banning male same-sex relations.

He even co-wrote and made a cameo appearance in the world’s first feature-length movie featuring a gay protagonist: the 1919 silent film “Anders als die Anderen” (“Different from the Others”).

Nor did Hirschfeld shy away from political engagement. In 1897, he founded the “Scientific Humanitarian Committee” to advocate for gender and sexual rights.

Then, from 1897 to 1898, Hirschfeld worked to decriminalize male same-sex relations in Germany. He collected over 5,000 signatures from Germans willing to be publicly identified with the effort, including such luminaries as Albert Einstein and Thomas Mann. A bill decriminalizing male homosexual acts gained only minority support when it was introduced in Parliament in 1898, but a new bill was reintroduced after the First World War. In the more progressive environment of the Weimar Republic, the bill advanced to parliamentary committee, only to stall when the Great Depression hit in 1929.

Like most European countries, Germany had – and still has – an “internal passport,” a government-issued ID that citizens are expected to carry with them. Germans whose passport indicated “male” but who dressed in female clothing were subject to police harassment or arrest for disorderly conduct.

Together with a colleague, Hirschfeld in 1910 convinced the Berlin police to accept a “transvestite certificate,” signed by a doctor, to nullify such charges. After World War I, he convinced the Prussian judiciary to permit legal name changes from gender-specific names to gender-neutral names, which enabled trans people to present as the gender that was most true to themselves.

Not all sexual minorities in Germany endorsed Hirschfeld’s views. Early twentieth-century Germany was a politically and culturally diverse place, and that diversity extended to same-sex and gender-nonconforming people.

Some gay men, for example, argued that far from being an “intermediary” sexual type, they were the most masculine men of all: After all, they didn’t form close bonds with women. The vision of these “masculinists” had little room for lesbians, bisexuals, or trans people.

A life’s work goes up in flames

By contrast, Hirschfeld’s approach was all-inclusive. In his view, all “sexual intermediaries” – whether L, G, B, T, Q, or I in today’s parlance – were worth recognizing and protecting. He once calculated that there were 43,046,721 possible variants of human sexuality. That was simply another way of saying that the human species was infinitely diverse.

When the Nazis came to power in 1933, Hirschfeld, who was Jewish, was on tour lecturing on sexual science. From abroad, he watched newsreels of his Institute for Sexual Science set aflame by Nazi Storm Troopers. Thousands of unique medical records, publications, photos and artifacts were destroyed. 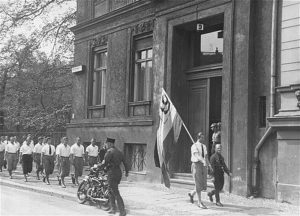 Students organized by the Nazi party parade in front of the building of the Institute for Sexual Research in Berlin prior to pillaging it on May 6, 1933. United States Holocaust Memorial Museum

Hirschfeld died two years later, and materials confiscated by the Nazis became evidence against gender and sexually-nonconforming people in the Third Reich. Male same-sex relations weren’t decriminalized in East Germany until 1968, and in West Germany until 1969. Full legal equality had to wait even longer.

Nearly a century after Hirschfeld’s institute burned, only tentative progress has been made in ending discrimination based on gender identity. And that progress is at risk.

Yet no bureaucratic definition of “sex” will change what Hirschfeld so clearly demonstrated over 120 years ago: Trans people exist.