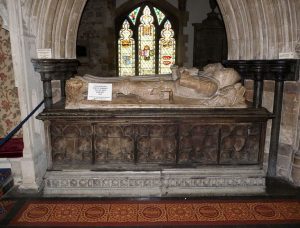 Tomb of Margaret Beauchamp and her second husband John Beaufort, Duke of Somerset (Photo by Memorino from Wikimedia Commons)

Margaret was born c. 1410 and was the daughter of Sir John Beauchamp, 3rd Baron Beauchamp of Bletsoe, Bedfordshire and his second wife Edith Stourton, daughter of Sir John Stourton of Stourton, Wiltshire. Margaret’s family was more of the gentry than the nobility. We know nothing of her childhood but judging from the way she educated her daughter later, she must have received a solid education. In 1421, her only brother John died young and she inherited his manors of Lydiard Tregoze in Wiltshire, Ashmore in Dorset and Bletsoe and Keysoe in Bedfordshire. She also inherited the right to any barony of Beauchamp.

When Margaret was about fifteen, she married Sir Oliver St. John. Margaret would give birth to two sons and five daughters with St. John, all of whom survived infancy. All the adult children would marry except for the last daughter, another Margaret who became the abbess of Shaftsbury. Sir Oliver died fighting in France in 1437 leaving Margaret a widow with many children to raise.

In 1442, Margaret married again, this time to John Beaufort who was the 3rd Earl of Somerset at the time of the marriage. John was the grandson of John of Gaunt, the third son of King Edward III. John of Gaunt had a long time relationship with Katherine Swynford and had several children with her who were all initially illegitimate and named Beaufort after one of John’s lordships in France. But John of Gaunt eventually married Katherine and their children were legitimized by King Richard II. However, King Henry IV made sure these children and their descendants could not inherit the throne of England.

The Earl of Somerset had inherited his title when his elder brother Henry died in 1418. In 1419, John and his younger brothers Thomas and Edmund Beaufort went to Normandy to fight in the Hundred Years War. John was knighted by King Henry V and was present at the siege of Melun from July to November of 1420. In the spring of 1421, John joined Thomas, Duke of Clarence in a chevauchée in Maine and Anjou where they were involved in a battle at Baugé. John and his brother Thomas were captured and held prisoner by the French.

Thomas Beaufort was shortly released but negotiations for John’s release from captivity dragged on from the time of his capture until 1438. His seventeen years of imprisonment was the longest period endured by an English aristocrat during the Hundred Years War. He was very bitter and claimed that the ransom personally cost him £24,000 and left him destitute. He returned to England but then went right back to France in 1439 where he became captain of Cherbourg, Avranches, Falaise and other fortresses. In 1440, he was back in France with a considerable force and had several military successes. John had expectations of being named lieutenant-general in France but the position was given to Richard, Duke of York. John was frustrated and disillusioned and returned to England.

Margaret and John were married in 1442 and Margaret quickly became pregnant. Their daughter Margaret was born on May 31, 1443 at Bletsoe. John was elevated to the title of Duke of Somerset and he was made Knight of the Garter that same year. Once again, John wanted to lead an expedition to France in hopes of great victory and spoils to replace his depleted personal fortune. In August, his forces were gathered at Cherbourg. But the campaign was an anti-climax after high expectations. He paid off his troops and returned to England. Because the campaign had been deemed a failure, he was barred from court. By this time he was ill and remained at Corfe and Wimborne. He died on May 27, 1444, possibly by his own hand. Margaret was again a widow with another young child added to her brood from her first marriage. 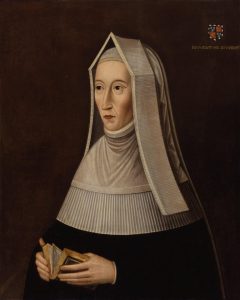 Margaret and her children lived a quiet life at her homes of Bletsoe and at the Beaufort home of Maxey in the Lincolnshire Fens. These houses were very small and homey, not ostentatious castles. Margaret was very astute and took a very vigorous interest in managing her estates. The younger Margaret always held her St. John half-brothers and sisters in affectionate esteem so we can imagine their early life under their mother’s care was happy. Margaret and her young daughter were very close. Because her youngest child was of the most aristocratic birth, Margaret saw to it that she was highly educated. She was also one of the greatest heiresses in the kingdom.

Care of the younger Margaret was entrusted to her mother but the safekeeping and supervision of her lands and marriage had been rewarded by King Henry VI to William de la Pole, Duke of Suffolk. By 1450, William had married young Margaret to his own son John. Because of Margaret’s young age, she stayed with her mother. But in the same year, Suffolk was being blamed for mismanaging the King’s government and was fighting for his political life. He was eventually murdered and Margaret’s wardship was returned to the king. In February of 1453, Margaret and her daughter were summoned to court to visit the king and his queen, Margaret of Anjou.

Henry instructed Margaret to bring her daughter to Windsor to await an audience upon his summons. He awarded Margaret one hundred marks (about £25,000 in today’s money) to buy clothing for the young Margaret. She must have been sumptuously dressed when presented at court. The king’s intention was to annul her marriage to John de la Pole and award her marriage rights to his half-brothers Edmund and Jasper Tudor. It was eventually decided that young Margaret would marry Edmund in two years.

Margaret returned home to Bletsoe. Her daughter and Edmund Tudor were married there on November 1, 1455. Margaret left her mother’s home and gave birth to a son named Henry in Pembroke Castle on January 28, 1457. Margaret Beauchamp was now the grandmother of the future King Henry VII.

Sometime between May 27, 1444 and August 31, 1447, Margaret married again. Leo (Lionel) Welles, 6th Baron Welles was a wealthy Lincolnshire landowner, soldier and royal councilor to the king. He fought in France and served as Lieutenant of Ireland for seven years. He was married in 1417 to Joan (or Cecilia) Waterton, daughter of Robert Waterton of Methley who had been a trusted retainer of John of Gaunt and the Lancastrian kings. Joan died in 1447 leaving Welles free to marry again.

Margaret’s marriage to Welles gave him an interest in her two dowers and her Beauchamp of Bletsoe inheritance. Welles served as a lieutenant of Calais from 1451 until 1456. He was elected a Knight of the Garter sometime before May of 1457. He may have been captured by Yorkists at Bloreheath but survived to join forces with the Lancastrians in 1459. He was a part of the forces of Margaret of Anjou in the north in 1461 and fought at the Battle of St. Albans in February of that year. He died at the Battle of Towton on March 29 and was subsequently attainted along with his elder son by his first marriage and his grandson.

Margaret bore a son John, Viscount Welles c. 1450. Margaret worked very hard to get the attainted properties from her husband diverted to John but never succeeded. He was dependent on his mother for his living until her death. He was in the household of King Edward IV when he died in April of 1483 and attended the coronation of Richard III. But he rebelled against Richard III in August of 1483 and fled to Brittany to join forces with his nephew Henry Tudor. John fought at Bosworth and Henry VII rewarded him with the title Viscount Welles and restored his property. As the king’s man, he was married to Cecily, daughter of Edward IV and sister of Henry VII’s queen, Elizabeth of York. He was made Knight of the Garter in 1488 and died on in February 1499. He is buried in Westminster Abbey. 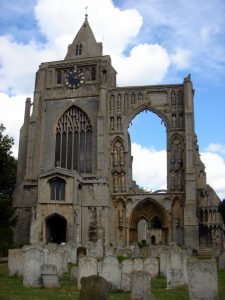 Early on in her life, Margaret had taken a keen interest in the Fenland Abbey of Crowland which was close to her principal residence of Maxey. She was a patron and financially supported them for many years. In 1465, she and her daughter Margaret had joined the confraternity there. A confraternity is a voluntary association of laypeople who were supportive and faithful to a particular religious institution.

Margaret died sometime before June 3, 1482. She was buried next to her husband John Beaufort, Duke of Somerset in St. Cuthberga Churchyard at Wimborne Minster in Dorset, England. About a month after her death, a noteworthy document was drawn up at the Palace of Westminster in the presence of King Edward IV and Margaret Beaufort the younger’s fourth husband Thomas Stanley, 1st Earl of Derby. In an effort to secure the return of her son Henry Tudor from exile in Brittany, Margaret arranged for the disposal of her mother’s properties which were designated to Henry’s use on the condition of his return to court and the grace and favor of the king. Edward IV applied his seal to the document signifying he was ready to welcome Henry back. But the document had a provision for Henry to choose not to return and due to his own well-founded and long-standing suspicions, he remained in Brittany. Edward IV died on April of 1483 and his brother Richard usurped the throne. Henry Tudor would eventually return to fight against Richard at the Battle of Bosworth in August of 1485. He won and the Tudor dynasty of kings of England was born.