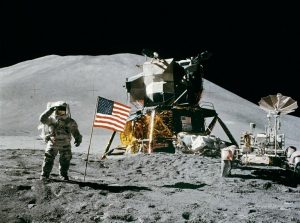 Nearly fifty years ago, history was made when Neil Armstrong took his famous first small step on the surface of the moon. But, as they say, behind every great man is a woman, and for Armstrong that woman was Margaret Hamilton, the programmer who invented the software that made the moon landing possible, not to mention software itself.

In 1960, the 24 year-old Earlham College mathematics graduate took a software development position at MIT, in an effort to support her husband while he attended Harvard Law School. Just one year later, Hamilton was presented with the opportunity of a lifetime, when MIT’s Instrumentation Laboratory was tasked with developing the software for Apollo 11.

As a working mother in the 1960s, Hamilton was an outlier. Then, as now, men dominated technology and engineering, but the founding father of software as we know it was actually a mother. Throughout the eleven year span of the project, Hamilton and her team invented core ideas in computer programming, writing code for the world’s first portable computer, a decade before the advent of Microsoft. 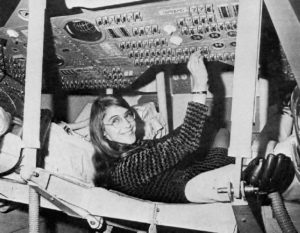 As the project unfolded, it became increasingly clear that the mission required software in order to be successful. In 1965, Hamilton led the Software Engineering Division. Just three years later, more than 400 people were working on Apollo’s software, hoping to win the race to the moon. Little did they know, their programming would later become a $400 billion industry.

It was in this position that Hamilton helped develop asynchronous and priority scheduling software, which allowed computers on board to prioritize important tasks, while placing standard or less necessary functions on hold until the priority tasks are completed. Without this software, it’s likely that the mission would have failed.

This became clear minutes before Apollo 11 touched down on the Sea of Tranquility, when the Apollo computer began delivering error messages during the landing. These messages indicated that the computer was overwhelmed with unnecessary tasks unrelated to landing. According to Wired, because of Hamilton’s asynchronous software, the computer recognized that it didn’t have enough room to perform all of the functions in its docket, and was able to focus on the highest priority job.

In a letter to Datamation, Hamilton spoke to the success of her software, stating,

Due to an error in the checklist manual, the rendezvous radar switch was placed in the wrong position. This caused it to send erroneous signals to the computer. The result was that the computer was being asked to perform all of its normal functions for landing while receiving an extra load of spurious data which used up 15% of its time. The computer (or rather the software in it) was smart enough to recognize that it was being asked to perform more tasks than it should be performing…The software’s action [eliminated] lower priority tasks and re-established the more important ones … If the computer hadn’t recognized this problem and taken recovery action, I doubt if Apollo 11 would have been the successful moon landing it was.

By the 70s, Hamilton had moved on from her work on the Apollo, and has since founded several software companies. Today her company, Hamilton Technologies, exists just blocks away from MIT, where her career took off.

Hamilton and her team at MIT accomplished feats which were instrumental to the creation of the Computer Science field, working to gain hands-on experience in a field that was more akin to the Wild West than an actual discipline. Fifty years later, the Computer Science field has rapidly expanded–so much so that America is now facing a monumental STEM shortage. But recent public policy initiatives have the nation’s higher education institutions placing an increased emphasis on STEM training. And evidence exists that this emphasis is helping to provide opportunities for people, like Hamilton, that don’t necessarily fit the traditional STEM mold.

As we look to the future of STEM, Hamilton’s triumph remains a bright beacon of promise for people of all genders. Although Armstrong’s triumph ought to be celebrated as a giant leap for mankind, those accomplishments wouldn’t have been possible without the groundbreaking work of the women behind the scenes.