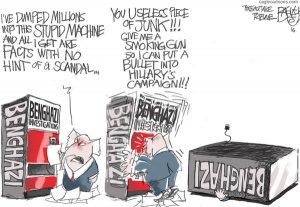 A day after the House Benghazi committee released a final report that left Hillary Clinton relatively unscathed, conservative activists — the conspiracy-minded ones who pressured House leaders to appoint the committee in the first place — rounded on Chairman Trey Gowdy for failing to deliver the goods.

“To say I was disappointed would be an understatement,” retired Adm. James “Ace” Lyons complained at a meeting Wednesday afternoon of the Citizens’ Commission on Benghazi, a coalition of far-right foreign-policy types. “Chairman Gowdy is not a stenographer. … He was there to make findings and conclusions. He had the information. He copped out, which is consistent that we’ve seen with all our congressional leadership.”

Retired Gen. Thomas McInerney agreed that “the American people want to know from a group that spent almost two years on it what the conclusions are. That’s what we pay you for, Mr. Gowdy.”

Charles Woods, the father of Ty Woods, one of the four Americans killed in Benghazi, lamented that “I really don’t have closure as far as who made the decision not to rescue.” And Roger Aronoff of Accuracy in Media, which convened the Citizens’ Commission at the National Press Club, complained that “they put a bunch of transcripts in there, interviews, but they didn’t weave it all together.”

There were murmurs of agreement from participants when Lyons said of Gowdy: “Regretfully, I don’t think he measured up yesterday.”

A woman in the crowd floated a new Benghazi conspiracy. “Has someone in the GOP leadership gotten their fingers involved in watering down some of this to benefit Secretary Clinton?” she asked.

Nobody rebutted this idea.

Herein lies a lesson for Republicans who are perpetually trying to appease the far right: It’s a fool’s errand. They went to the tea party — and now they’re taking Donald Trump to the prom. Likewise, then-House Speaker John Boehner named the Benghazi committee because activists were dissatisfied that seven previous congressional investigations had failed to uncover major scandal material. Now an eighth has produced more of the same — and the agitators are as agitated as ever.

Two GOP members of Gowdy’s own committee were dissatisfied enough to write their own narrative drawing more sweeping accusations against Clinton and President Obama. Gowdy must feel the need for some cover: A day after delivering what was supposed to be the definitive account of Benghazi, his committee called in another witness for an interview. Democrats pointed out that the interviewee had just removed from his Facebook page the hashtag #IfYouVoteForHillaryYouAreBeyondStupid.

The Citizens’ Commission on Benghazi, which held Wednesday’s event, is not the most reputable outlet. It dropped “former CIA officer” Wayne Simmons as one of its 11 members after the former Fox News commentator, who it turns out had no military or intelligence experience, pleaded guilty to fraud charges this spring.

Even without Simmons’ creativity, the group managed to produce a 73-page Benghazi report this week full of inventive accusations. They found “troubling evidence that Obama and Clinton were deeply and knowingly involved in running guns to al-Qaeda in Libya,” as well as “a clear case of official U.S. government submission to the Islamic Law on slander.”

They wrote that Clinton blocked U.S. military forces from attempting a rescue mission, and they attributed the decision to oust Libya’s Moammar Gaddafi in part to financial interests of the Clinton Foundation.

They judged that Obama — one speaker referred to him as “Barack Hussein Soetoro Obama” — had “an ideological commitment” to expanding the Muslim Brotherhood. They even gave longtime Clinton confidant Sidney Blumenthal credit for the administration’s “support for the Libyan Muslim Brotherhood-led al Qaeda militias.” In one elaborate theory, they tied those guarding the U.S. facilities in Benghazi both to Blumenthal and to the wife of a former chairman of the House Intelligence Committee.

They even faulted Ambassador Chris Stevens, who died in Benghazi, saying he “rather romanticized the Libyan jihadis.”

“We see a field of smoking guns,” Aronoff said.

Clearly. But the Benghazi committee didn’t. Gowdy “notably refrained from assigning blame or demanding accountability,” Clare Lopez, of the Center for Security Policy and an adviser to the Ted Cruz presidential campaign, told the gathering. “He also did not draw a connection between the dots.”

“I think he had his reasons — political,” McInerney said. He speculated that congressional leadership had approved “black operations” to run weapons from Benghazi to Islamic State forces in Syria. “That’s the dirty little secret that nobody wants out,” he said.

Aha! So Gowdy himself is in on the Benghazi conspiracy.