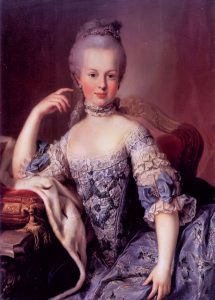 The Queen liked to be surrounded by pyramids of gorgeous pastries and followed a strict macaroon-and-champagne diet. Or did she?

Well, according to contemporary accounts, not at all. The etiquette required the King and Queen to take some of their meals in public, in front of the courtiers and visitors. Anyone decently dressed was admitted in Versailles, and many came to the Palace to watch the royal couple eat.

The Marquise de La Tour du Pin, who was a lady-in-waiting to Marie-Antoinette, attended those occasions. She notes in her Memoirs that “the King ate with a hearty appetite, but the Queen did not remove her gloves, nor did she unfold her napkin, in which she was very ill-advised.” 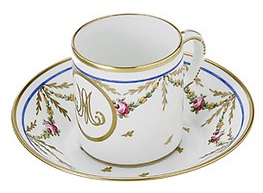 Marie-Antoinette literally did not touch her food. This attitude was construed as a mark of contempt for the assembly. The Queen thus unwittingly reinforced her image as a distant, haughty woman.

But those were the meals she took – or rather did not take – in public. Did Marie-Antoinette enjoy food in a more private setting? Let us listen to what Madame Campan, her First Chambermaid, says in this regard:

“[Marie-Antoinette] usually ate nothing but roast or boiled poultry and drank nothing but water. The only things of which she was particularly fond were her morning coffee and a sort of bread to which she had grown accustomed during her childhood in Vienna.”

So Marie-Antoinette, for breakfast, her most intimate, pleasurable food moment, preferred coffee. And what is Madame Campan referring to when she speaks of that sort of bread? Well, croissants, of course! 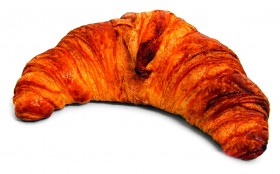 Croissants were first made by a the bakers of Vienna to celebrate a victory against the Turkish armies that had been besieging the city. Some say that a baker, up by necessity in the middle of the night, sounded the alarm when he heard the military preparations for the attack, but this story is not attested. What is sure is that the croissant recalled the crescent, symbol of Islam, featured on the Turkish flags. The new crescent-shaped bread became immediately popular in Vienna.

It is only natural that, when Marie-Antoinette arrived n Versailles as a bride of fourteen, she came to consider the croissants of her childhood as what we would call “comfort food.” The fashion spread and croissants became popular in France as well. To this day, in French bakeries, croissants and similar products are called to this day viennoiseries, or Viennese breads. Please note, however, that the current fluffy croissant dough dates from the late 19th century.

Let them eat cake, a phrase Marie-Antoinette never said, is still wrongly attributed to her, while few give her credit for bringing croissants to France.