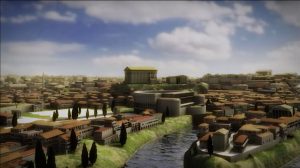 A temple on a hill

Like the Etruscans and Greeks before them, the Romans are known for having constructed monumental temples in highly visible locations. Situated atop the Capitoline Hill in the heart of the ancient city of Rome, the Temple of Jupiter Optimus Maximus represented this tradition well (today the site is occupied by a piazza designed by the Renaissance artist Michelangelo, see photo below). Unfortunately, neglect, spoliation, and eventual site adaptation means that very little of the Temple of Jupiter remains for us to study. Despite its absence, however, the lasting impact of the Temple of Jupiter Optimus Maximus can be observed in the many Roman temples that emulated it, making it perhaps the most important of all Roman temples in terms of its cultural influence and design. (Watch this video to see where the Temple stood in the ancient city.) 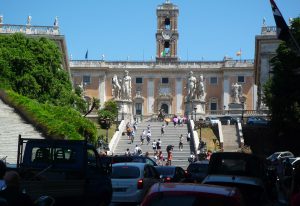 Looking up to the Capitoline Hill from the street below

Remains of the temple include portions of the tuff foundation and podium (see photo below), as well as some marble and terracotta architectural elements. Most of the structural remains can be viewed in situ (in their original setting) on the grounds of the Palazzo Caffarelli (today part of the Capitoline Museums), and surviving fragments are located within the Capitoline Museums. 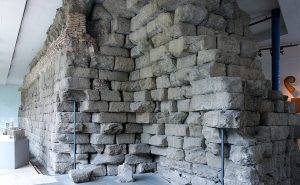 Based on the surviving portions of the archaic foundation, the podium for the temple likely measured approximately 50m x 60m. Those dimensions are somewhat speculative, however, as there is no scholarly consensus on the precise measurements. The current best guess is that the temple was quite similar in plan to that of late-archaic Etruscan temples like the Temple of Minerva at Veii (also called the Portonaccio temple)—a high podium (platform) with a single frontal staircase leading to a three-column deep pronaos (porch) fronted by a hexastyle (six columns across) arrangement of columns. One of the defining features of the Temple of Jupiter Optimus Maximus was its three-part (tripartite) interior with three adjacent cellae (rooms) for the three major deities honored within (Jupiter, Juno, and Minerva). 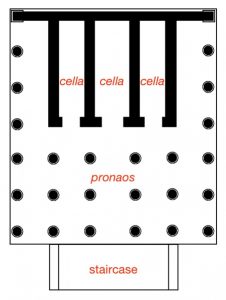 The earliest phase of the temple featured terracotta elements, including acroteria (sculptures on the roofline) and a large terracotta statue of Jupiter driving a quadriga (four-horse chariot). Inside the temple was another image of Jupiter—the cult statue reportedly sculpted by the famed archaic sculptor Vulca of Veii. This statue was painted red and served as the basis for the tradition of painting the faces of Roman generals during officially sanctioned triumphs.

In contrast with the modest terracotta (baked clay) that was used to adorn the earliest versions of the temple, several Roman sources note that the later reconstructions made during the period of the Roman empire featured much more extravagant materials. Ancient authors, including Plutarch, Cassius Dio, Suetonius, and Ammianus described the temple as outstanding in its quality and appearance, with a superstructure of Pentelic marble, gilded roof tiles, gold-plated doors, and elaborate pedimental relief sculpture.

Although primarily dedicated to Jupiter Optimus Maximus, the temple also included spaces for the worship of Juno and Minerva. Together, the three deities comprised what is known as the Capitoline Triad—a divine group significant to the Roman state religion. Jupiter, the Roman equivalent of Zeus, was the most significant of these deities. This is supported by the specific aspect of his worship noted in the full title of the cult—Iuppiter Optimus Maximus, Latin for “Jupiter, Best and Greatest.”

An important date for Rome

The temple was reportedly completed around 509 B.C.E.—the date itself is significant as it marks the purported year during which the Romans overthrew the monarchy (which was Etruscan, not Roman) and established a republican system of government. Thus, not only was the temple located in a prominent geographical location, it was also a lasting reminder of the moment when the Romans asserted their independence. This historical proximity of the founding of the Republic with the construction of the Temple of Jupiter may have also helped to lend support to its central role in Roman religion and to architectural design practice. 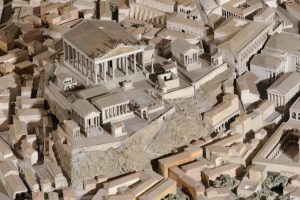 The building itself was destroyed and rebuilt several times in the Republican and Imperial periods, and benefitted from several restorations along the way. First destroyed in 83 B.C.E. during the civil wars of Sulla, the temple was rededicated and rebuilt during the 60s B.C.E. Augustus claimed to have restored the temple, most likely as part of his enormous building program that began during his rise to power in the first century B.C.E. The temple was again destroyed in 69 C.E., during the tumultuous “year of the four emperors.” Although rebuilt by the emperor Vespasian in the 70s C.E., the temple once more burned during a fire in 80 C.E. The emperor Domitian enacted the final major reconstruction of the temple during his reign, between 81 and 96 C.E.. The fact the temple was never neglected for very long is a testament to its perceived importance.

After the first century C.E., the temple seems to have retained its structural integrity until the emperor Theodosius eliminated public funds for the upkeep of pagan temples in 392 C.E. (Christianity had become the official state religion of the Roman Empire). Following this, the temple was spoliated several times in the Late Antique and Medieval eras. Eventually a grand residence, the Palazzo Caffarelli, was built on the site in the sixteenth century C.E. 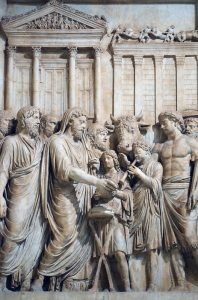 The Temple of Jupiter Optimus Maximus was more than simply a standard religious building. From its earliest phases, the temple also seems to have been a repository for objects of ritual, cultural, and political significance. For example, the Sibylline Oracles (books containing the prophecy of the Sibyls) were kept at the site, as were some spoils of war, like the Carthaginian general Hasdrubal’s shield. In addition, the temple served as the end point for triumphs, a meeting place for the senate, a location for combined religious and political pageantry, an archive for public records, and a physical symbol of Rome’s supremacy and divine agency.

Sacrifice Panel of the Lost Arch of Marcus Aurelius 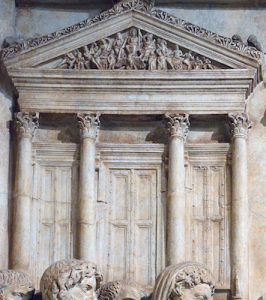 Perhaps the best depiction of the Temple of Jupiter Capitolinus can be seen on the Sacrifice Panel from a now lost arch of the emperor Marcus Aurelius (above and detail, left). In this relief, Marcus Aurelius is shown in his role as Pontifex Maximus (chief priest) offering a sacrifice to Jupiter amidst a crowd of attendants. A temple with three doors, presumably the Temple of Jupiter Capitolinus, is portrayed in the background.

In this rendering, the temple is tetrastyle (four columns across the front—likely a truncated artistic representation due to the size of the panel) and of the Corinthian order.  The pediment features Jupiter enthroned in the center while flanked by other deities; an intricately sculpted raking (sloping) cornice, surmounted at the apex by a quadriga (four-horse chariot), frames the scene.

Although the Temple of Jupiter Optimus Maximus was built in an Etruscan style and involved Etruscan craftsmen, it nevertheless serves as the origin point for the development of Roman temple-building tradition, which often incorporated local elements into a more broadly Roman template. 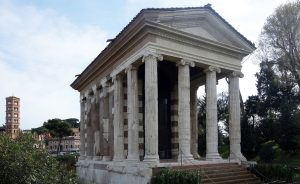 In terms of architectural history, the lasting significance of the Temple of Jupiter Optimus Maximus can be best recognized by its influence on Roman temple building from the last two centuries B.C.E up until the third century C.E. Imperial temples across the empire—including the Temple of Portunus at Rome (see photo above)—the Maison Carrée in France, and the many Capitolia (Temples dedicated to Jupiter, Juno, and Minerva) of Roman colonies established in north Africa demonstrate an obvious visual connection to the Capitoline temple with a shared frontality, deep front porch, and rich sculptural adornment (some characteristics of which are shared by the Temple of Baalshamin at Palmyra). Yet, the influence of the Temple of Jupiter Optimus Maximus can also be seen in the overall Roman approach to designing architecture—monumental scale, urban setting, lavish decoration, and imposing elevation. Together, these elements are hallmarks of Roman temples and suggest that the Temple of Jupiter Optimus Maximus was an origin point for what would become a commonly understood architectural mark of Roman sovereignty over the Mediterranean world.