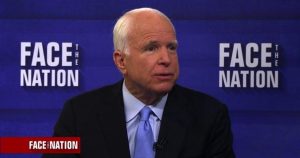 Donald Trump is Vladimir Putin’s puppet, so of course he would defend Russia instead of siding with American intelligence agencies. And that did not sit well with John McCain.

On Friday, the CIA released an assessment concluding that Russia hacked into our election to help Trump win. Ever since then, Trump and his team have been desperately defending Russia and insisting that Democrats made the whole thing up and that Russia would never interfere in our democratic system.

During an appearance on Fox News Sunday, Chris Wallace asked Trump about the Russian hacking. Trump responded by bragging about his victory and claimed that our intelligence agencies can’t possibly know that Russia hacked anything.

“I think it’s ridiculous,” Trump said. “I don’t believe it. I don’t know why and I think it’s just — you know, they talked about all sorts of things. Every week it’s another excuse. We had a massive landslide victory as you know in the electoral college.”

“Hacking is very interesting,” Trump continued. “Once they hack, if you don’t catch them in the act, you’re not going to catch them. They have no idea if it’s Russia or China or somebody. It could be somebody sitting in a bed someplace.”

Trump just demonstrated that he knows nothing about how technology works beyond how to use Twitter. Hacking leaves traces that experts can follow to identify the culprit. But instead of believing the experts, Trump tried to pin everything on the Democrats.

“I think the Democrats are putting it out because they suffered one of the greatest defeats in the history of politics in this country,” Trump claimed. “And frankly, I think they’re putting it out. It’s ridiculous.”

Trump went on to lecture that the CIA should blame other countries or individuals for the hack if they are going to report on what happened, but he couldn’t end the interview without bragging again.

“We had — many people are saying — one of the great victories of all time.”

First of all, Trump’s “victory” is not even close to being one of greatest of all time. As it turns out, we keep the records of every presidential election and the records show that in the last 100 years alone, there are 18 elections in which a candidate did way better than Trump, including President Obama is 2008 and 2009. So it was NOT a “landslide” or a “mandate” like Trump imagines.

Second, Trump is clearly denying the facts again, which is why Senator John McCain delivered the hard truth on Face The Nation.

McCain said that he wants a bipartisan investigation by Congress to confirm the CIA assessment and he is totally bewildered by Trump’s defense of Russia despite the evidence.

“I don’t know what to make of it,” McCain said of Trump’s claims. “Because it’s clear the Russians interfered. Now whether they intended to interfere to the degree that they were trying to elect a certain candidate, I think that’s a subject of investigation. Facts are stubborn things. They did hack into this campaign.”