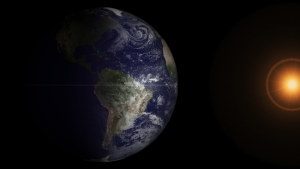 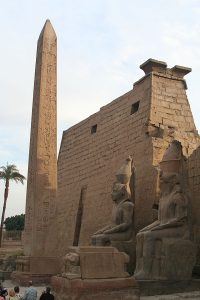 The obelisk and Pylon at Luxor / Photo by Steve F-E-Cameron, Wikimedia Commons

Scientifically, the year is a complete cycle of seasons. A year is when the earth completes one full orbit of the sun. Its length is measured from one spring equinox to the next spring equinox.

Measuring the time of year was important to most people. Knowing the season was vital when deciding to plant and harvest crops as well as managing livestock in colder climates. Other cultural and religious practices happened at specific times of the year, so it was  important to have some sense of time.

The obelisks of ancient Egypt, dating from as far back as 3000 BC, were used to measure the progress of the year by the length of the shadow they cast. Stonehenge in Britain was probably built for the same purpose. It measured the year by the sunrise and sunset angle on the horizon.

It is possible to use other, easily observed, signs of the passage of the year. The annual disappearance and re-appearance of the stars has been used by many cultures. Natural signs such as the blossoming or fruiting of particular plants or the migrations of birds have also been used to mark the passing of the seasons. Maori used a combination of the stars and the natural signs to determine their new year.

For centuries Western Christianity has referenced time in relation to the birth of Christ. The abbreviation AD stands for Anno Domini, the Latin term meaning ‘in the year of the Lord’. Years after the birth of Christ are AD while years before this were BC or ‘Before Christ’. But for the Chinese, 2010 is a much older year: 23 January 2011 is the first day of the year 4710.

New Year around the World 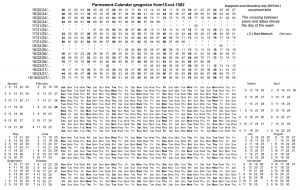 This is the most widely used calendar in the world. The term New Year’s Day was adopted in Western Europe in the Middle Ages. Before this the Roman Julian calendar (named after Julius Caesar) was used. The Roman influence explains why the months of July (Julius) and August (Augustus) are named after Roman emperors.

Julius Caesar overhauled the Roman calendar in 47 BC by changing the number of days in the months to bring the total to 365 days with a leap day every four years. Caesar changed New Year’s Day from the northern spring equinox to just after the northern winter solstice.

This new calendar functioned well enough, but in 1582 AD it was realised that the system of leap years was not perfect. This was fine-tuned by dropping three leap years every 400 years. This change produced a calendar year of precisely 365.2422 days, which was adopted by the Roman Catholic Church and named after Pope Gregory. New Year’s Day was now observed on the first day of the calendar year.

Catholic countries adopted this calendar, but the British Empire resisted what it saw as a papal conspiracy (the Pope trying to take over) and did not adopt the Gregorian calendar until 1752. Russia didn’t give up the Julian calendar until after the Bolshevik Revolution in 1917. This created confusion for some historians and commentators outside of Russia who referred to the revolution as the ‘November Revolution’ when, in fact, it was October in the Russian calendar.

In 1792, in the heady days after the French Revolution, the Republicans replaced the Gregorian calendar with one of 12 equal 30-day months, plus five or six extra days a year. Weeks were of 10 days, which meant that rest days were less common. Days were divided into 10 hours of 100 minutes and 10,000 seconds. Napoleon returned France to the Gregorian calendar in 1806. 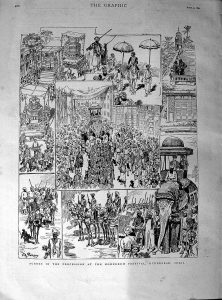 Scenes in the procession at the Mohurrum festival, by Victor Armand Poirson, 1890 / Wikimedia Commons

The Islamic year begins on the first day of the month of Muharram. It is counted from the year of the Hegira (Anno Hegirae), when Muhammad emigrated from Mecca to Medina (16 July 622 AD). The New Year in December 2009 marks the beginning of 1431 AH. 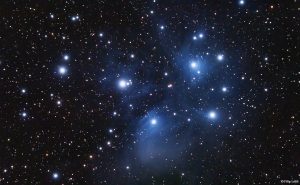 Matariki, the Māori name for the Pleiades / Wikimedia Commons

The Maori New Year is marked by the rise of Matariki (the group of stars also known as the Pleiades star cluster or The Seven Sisters) and the sighting of the next new moon. Like Chinese New Year (and the Christian festival of Easter), its exact timing varies from year to year, but it usually occurs during the month of June. Traditionally, Matariki was used to determine the coming season’s crop. A warmer season, and therefore a more productive crop yield, was indicated by how bright the stars were. 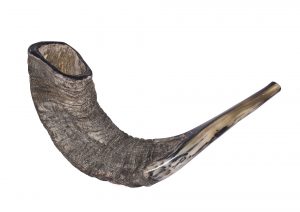 A shofar, symbol of the Rosh Hashanah holiday / Wikimedia Commons

Rosh Hashanah is one of the most important religious holidays in the Jewish calendar. In Hebrew, Rosh Hashanah means the ‘head of the year’, and it commemorates the creation of the world. This will be the year 5768 and the month of Tishri.

The Jewish calendar represents the number of years since creation, and this is calculated by adding up the ages of people in the Bible. So when we say that the year is 5763, that means 5763 years from the birth of Adam on the sixth day of Creation. On this basis the modern state of Israel was established in 5708.