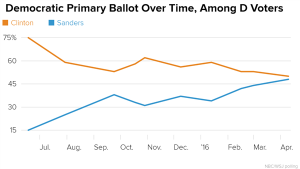 As mainstream media outlets go out of their way today to shower love on Hillary Clinton and paint Bernie Sanders as all but cooked in New York today (which is still to be seen), polls continue to paint a very different picture where it matters on a popular national scale.

According to an NBC News/Wall Street Journal poll, Clinton’s leads in every demographic – excepting those 55 and older – has continued to dwindle.  She now holds a paltry two percent lead nationally, down from double-digits last year and nine points last month.

Clinton’s “firewall” lead with minority voters has taken an enormous hit, dropping from 59% to 41%.  This drop from last year exceeds that among women with a total lead loss of 30%.

The victories Sanders has achieved in eight of the last nine primaries and caucuses confirm that Clinton’s desirability among voters is dwindling, and it is doing so with more rapidity than ever in these final months before the convention.

As usual, the media loves to hype news on days when primaries/caucuses are being held in states where Clinton leads in the polls, while coverage on the opposite end when Sanders is leading pales in comparison.

The problem for them is that the numbers that matter – not those in a single state – do not match the narrative they are pushing.

Whatever happens in New York today, Sanders will continue on – and he can do so with a great amount of optimism that the electorate is shifting more enthusiastically to him.