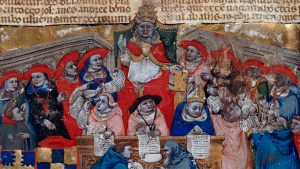 The Pope, as the head of the Catholic Church, led the single most powerful institution of the Middle Ages. / British Library, Public Domain

Cycles of Medieval church corruption coincided with the growth of strong secular rulers and were only tempered by the appearance of reformist popes and church orders.

The level of church corruption in the Middle Ages corresponded to the growth of reform movements as well as leadership by spiritual popes. Reform movements like those begun at Cluny in the 10th Century, the growth of the Cistercian monastic order, and the rise of Mendicant orders such as the Franciscans appeared during times of rampant corruption that began at the highest ecclesiastical tiers and filtered down to local diocesan parishes. Such corruption was tied to many reasons and, in most cases, was only temporarily halted by the reformers.

Priestly Celibacy within the Clergy 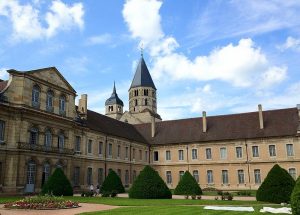 Cluny Abbey (or Cluni, or Clugny) is a Benedictine monastery in Cluny, Saône-et-Loire, France. / Photo by Michal Osmenda, Wikimedia Commons

University of Chicago Professor Andrew Greeley, writing about the medieval parish priest, states that, “At most times and places he also had a wife (or a concubine) and children of his own…” Greeley further observes that local bishops made no attempts to curb such practices and frequently had concubines of their own. Some dioceses even imposed a tax on priests with wives and children.

The Sin of Simon Magnus 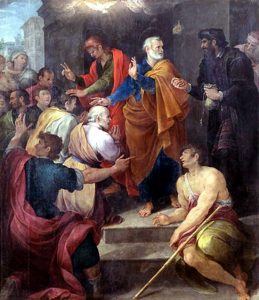 Peter’s conflict with Simon Magus by Avanzino Nucci, 1620. Simon is on the right, dressed in black. / Wikimedia Commons

Simony was the practice of selling ecclesiastical offices. In essence, the practice involved the trafficking of benefices. Unqualified men purchased church offices, enriching the coffers of the feudal lord or king, and recouped the investment from revenues obtained from the benefice. Contracts often detailed the specifications of such agreements with the newly appointed abbots of bishops promising to pay the lord a yearly percentage of collected revenues after the initial purchase.

The term “simony” referred to the New Testament Acts of the Apostles which relates the story of a man named Simon who practiced magic. After witnessed the bestowing of the gifts of the Spirit by Peter, Simon, greatly impressed, offered to buy the authority to bestow God’s gifts. Peter’s angry reply included the rebuke that, “May your silver perish with you, because you thought you could obtain the gift of God with money.” Medieval reformers seized on this statement to end simony. Although the 451 AD Council of Chalcedon had ruled against the practice, it was continued throughout much of the Middle Ages. 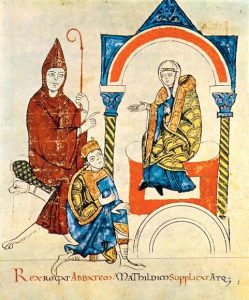 The crisis over “lay investiture” was most clearly illustrated by the conflict between the German Emperor Henry IV and the reformist pope, Gregory VII. The term derives from the practice of secular lords not only appointing bishops, but investing them with Episcopal symbols of office like the ring and crozier (staff). Kings like Henry IV were following long established precedent and relied on the loyalties of vassal bishops and their knights. Additionally, many bishops were both spiritual and secular rulers over their appointed sees, as in the case of Milan in Northern Italy.

Gregory VII and the reformist popes that came after him challenged this perspective. Only the popes could appoint bishops even as only church cardinals could elect popes, a practice followed since the reforms of Pope Nicholas II. In the early days of the church, groups of bishops consecrated new bishops and invested them with the insignia of ecclesiastical powers. Not until the pontificate of Callistus II was the issue resolved when German emperors agreed to stop investing bishops with spiritual emblems like the ring.

The Cycles of Church Corruption

The cycles of corruption frequently corresponded to poor church leadership, both central and local, as well as the rise of powerful lords. As European kings began to preside over more clearly defined territories, later identified as early modern nation states, the role of papal power was further diminished, such as with the Avignon papacy in the 14th Century. Corruption would persist until the 16th Century Council of Trent.