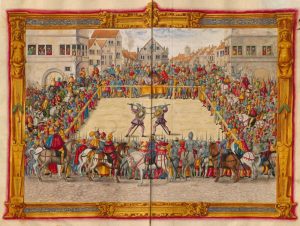 A 1540s depiction of a judicial combat in Augsburg in 1409, between Marshal Wilhelm von Dornsberg and Theodor Haschenacker. Dornsberg’s sword broke early in the duel, but he proceeded to kill Haschenacker with his own sword. / Bayrische Staatsbibliothek Cod. icon. 393, Wikimedia Commons

With only a handful of exceptions, such as in the cities of the Northern Italian Renaissance, warrior aristocrats dominated medieval society.  Their social position depended in theory and in practice on their capacity to inflict violence effectively,

Their values, their mode of life, and their technology reflect this intimate association between nobility and violence.

The paradigmatic medieval warrior was the armored knight: a man trained since childhood to fight in armor on horseback.  His principal weapons were the lance and sword.  Skirmishing with bows or other missiles he viewed with contempt, for only in close hand-to-hand combat could he display his prowess, that murderous combination of courage, strength and skill that his culture most prized.  His body was encased in armor: first, in mail of interwoven forged metal rings; then, after around 1300, in plates of high-grade steel.  His training, mount, and equipment represented a massive investment of economic and social capital that could not be lightly thrown away, so every possible effort was made to preserve his life despite the inherent dangers of his occupation.  The knight was a man superbly integrated into his own characteristic technological complex, a lethal synthesis of armor, weapons, horse, and martial skills.  How this complex emerged, however, is the subject of an interesting debate.

Back in 1962, an outstanding historian of technology, Lynn White Jr., published a series of essays in famous book, Medieval Technology and Social Change. In it, he argued that medieval society had evolved in response to a series of technological innovations in war, agriculture, and industry. Among professional historians, White’s arguments have been mostly discredited, mainly because we tend to privilege the role of culture in history and resist what can be seen as determinism. Nonetheless, White’s arguments remain powerful, and retain many supporters.[1] White contended that when the stirrup was introduced to Europe sometime in the eighth century, it provided horsemen a fighting platform sufficiently stable for the development of the first true shock cavalry —mounted knights.  White believed that Charlemagne’s grandfather, Charles Martel, had realized what was going on and fielded an army of these new and improved warriors who would become the basis for future Carolingian power.  To pay for them—and they were expensive—he granted them land pried from the Church under the condition that they maintain their horses and weapons, and come to fight whenever the army was mustered.  And thus, for White, feudalism was born.  On the surface, this is a persuasive argument; but, unfortunately, it seems most likely wrong.  First of all, the dates do not work out as White expected; second, he seems to have very much overstated the importance of stirrups to effective cavalry.[2]  Rather, it seems likely that Charlemagne himself began to place an increased emphasis upon cavalry, whose mobility was a great benefit within a sprawling empire, and who were ideally suited to the “rapid response” and “search and destroy” missions his policies demanded.[3] When his empire and royal authority began to collapse after his death, aristocratic warrior horsemen came to dominate the local landscape, achieving the social dominance they would enjoy until the end of the middle ages.

To do this, however, required one further element: castles.

The origins of the iconic medieval structure—the castle—are   obscure, but by the time of Charlemagne, rural fortresses of wood and earth played an essential role in  local defense.[4] As royal power eroded in the ninth and tenth centuries, kings ceased being responsible for building and maintaining these structures, and they passed entirely into the hands of local noble families, who were given the task of defending and governing the surrounding territory as part of their feudal obligations.[5]  This was a development with far reaching consequences, for these early castles also gave local noble families the power to resist higher authority. Capturing even a castle of wood and earth, if stoutly defended, required a major effort which, given their limited resources, early medieval kings could ill afford.  For this reason, royal power diminished each time a castle passed out of royal control and into the hands of an aristocratic family

These castles also provided secure bases from which even small numbers of mounted knights could dominate the countryside for miles around.  Noble families with knights and castles were in a position to extort submission from their less powerful neighbors.  Thus, the hapless monks at Conques wrote that their neighbor, Count Raymond, built a castle adjacent to their land despite their protests.  Raymond declared baldly that he was going “to subjugate by violence and submit to his lordship those who neglected to render their due submission to him.”[6]  The efficiency of the knight and castle technological complex was such that it gave a military advantage to those who had it over those who did not.  For this reason, Norman mastery of these interrelated technologies was a crucial component in their conquest first of England (c. 1066) and then Ireland and Wales.[7]

The Normans (that is, “the North Men”) represented here on the famous Bayeux Tapestry, were the descendants of Scandinavian Vikings and their families, who settled in Northern France. They readily adopted the religion, language, customs, and technologies, while retaining the ferocity of their forebears. This, along with their mastery of knight and castle technology, enabled Normans to conquer vast territories in Europe, including Sicily and most of Southern Italy in addition to the conquests in the British Isle, and overseas during the crusades.

Early medieval castles were simple affairs, consisting most often of a central mound of earth surrounded by a broad ditch. Within the ditch was a wooden wall or palisade, and on top of the mound a wooden tower or blockhouse.  This type of castle is often described as “motte-and-bailey” (the motte is the mound and fortress, while the bailey is the walled off area within the ditch), but there were many variations on this basic design.[8] 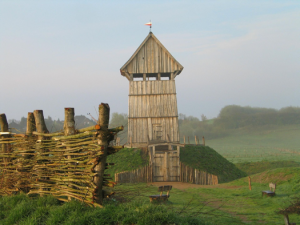 A modern reconstruction of the motte – the mound and tower – of a motte and bailey castle.

Wood and earth castles can, or course, be burned and leveled, and they suffer the effects of neglect rapidly, and for these reasons by the 11th-C., the wealthiest and most powerful aristocrats were instead building castles of stone. Over time, castles designs became progressively more elaborate. Crusaders adopted many of the principles of sophisticated Byzantine military architecture and applied them to their own castle construction, and brought back what they learned to Europe. So effective were these structures that conquering territory supplied with castles and resolute defenders became all but impossible. 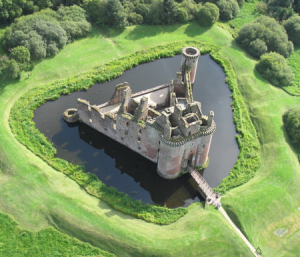 Not that medieval warlords did not routinely make the effort, and nowhere, perhaps, is the openness and flexibility of the medieval mind toward technological innovation on greater display than at the castle walls. Armies experimented with siege towers and various kinds of battering rams. Miners dug tunnels under castle walls to undermine them (which is why castles were often built on solid rock or at least surrounded with a moat). Engineers built huge stone throwing machines to batter down castle walls. The best of these was the trebuchet, a device that like so many medieval innovations originated in China, but was redesigned in Europe to deal with high castle walls. A trebuchet is basically a giant lever: a long tapering beam pivots on an offset fulcrum.  A sling was attached to the long end of the beam; a massive weight, often of many tons, hung from the short broad end.  Men used ropes to lower the long end to the ground, hoisting the weight into the air.  A boulder, weighing between 100 and 300 lbs. was then loaded in the sling, and then when the weight fell the sling arm flew up releasing the stone that could fly some 300 yards.  The English king Edward I used a battery of giant trebuchets to destroy the walls of several Scottish castles.[9]  Nonetheless, walls usually did not come down so easily, and when all was said and done, the only sure fire way to capture a castle was to starve its defenders into submission, an undertaking that could sometimes take years.

The knight and castle ruled medieval battlefields for many years, but towards the end of the high middle ages, starting around 1300, they received a new and worrisome challenge. Not only in the towns of Italy and Flanders, but across large swaths of Europe as in England and the Swiss Alps, the society of common folk was losing its dependence upon local lords, and its culture was becoming more self-reliant and better prepared to accept military discipline. Previously, while peasants identified themselves as serfs, as a kind of human property, they had no incentive to go out, fight, and be killed on behalf of their masters, and for this reason were generally considered a liability on the battlefield. Now, however, foot soldiers, were starting to win victories over their noble antagonists. This shift in military power provides a good example of why historians do not usually look to technological change alone as the cause of major cultural events. For what was changing was not so much technology, since all the weapons that foot soldiers were using had been around for quite a while, but rather the culture of the foot soldiers themselves, which now enabled and encouraged them to embrace tactical and technological change. Soldiers from the ranks of commoners could not afford the horses and equipment of knights, and so sought out military technologies that would magnify their strengths and offset their weaknesses: pikes, massive two-handed pole arms, and highly effective missile weapons, the crossbow and longbow.[10]

Originally published by REBUS Community Pressbooks, in History of Applied Science and Technology, under the terms of a Creative Commons Attribution 4.0 International license.