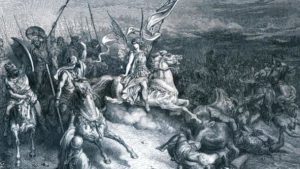 Judas Maccabeus’ death would mark the end of the Maccabean revolt against the Greeks – and the start of the extremely unstable Hasmonean dynasty. 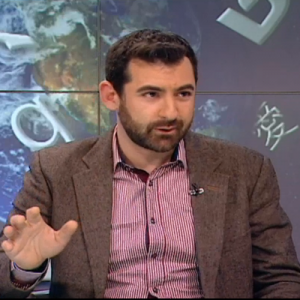 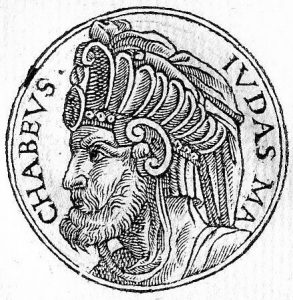 As Judas Maccabeus lay dead on the battlefield in Elasa, the Maccabean revolt that Jews everywhere mark on Hanukkah was over. It was 160 BCE.

The death of Judas, also known as Judah the Maccabee, could have been the end of his clan, the Hasmoneans. Actually it would mark the beginning of a dynasty that would rule the Jewish people for over a century, during a time of extreme upheaval.

Upon the death of their father Mattathias the Hasmonean, Judas, one of five brothers, assumed leadership of the Hasmonean clan and in 167 BCE, led the Jewish common people into revolt against their Greek overlords, the Seleucids – and against the Hellenized Jewish elite. A military genius, Judas beat back the Greek armies, recaptured Jerusalem and rededicated the Temple. But he was ultimately defeated in 160 BCE by the Seleucids (whose empire encompassed today’s Syria and Lebanon, and parts of Israel, Iraq and Turkey), and was killed. His brother Eleazar had been killed in an earlier battle.

His three remaining brothers, Johanan, Simon and Jonathan escaped with a small band of supporters and regrouped on the eastern bank of the Jordan, though soon after, Johanan was killed in an altercation with the Nabateans.

Simon and Jonathan took revenge on the clan responsible for his death, then continued their guerrilla war against the Seleucids and the assimilated, Hellenized Jews.

When they attacked Acre, the inhabitants pleaded for help from their Seleucid leaders in Syria, who again sent down an army to quell the rebellious Jews. Failing to achieve that, the Seleucids came to terms with the Hasmoneans. Five years of peace would ensue.

But Jonathan, who had become the leader of the Hasmonean clan, spent these years building up power and waiting for opportunity.

That opportunity arrived in 153 BCE, when a pretender arose against the emperor Demetrius, claiming to be the rightful emperor and throwing the Seleucid Empire into chaos. Demetrius pulled out most of his troops from Judea and threw them against the pretender, Alexander Balas.

The Hasmoneans lined up with Demetrius. But when Alexander Balas offered to make Jonathan high priest, in effect the leader of the Jewish people, in exchange for Hasmonean support, they switched sides.

Three years later, Alexander Balas prevailed and appointed Jonathan not only high priest but governor of Judea. The Hasmoneans were now not only the religious leaders of the Judeans but civil rulers as well.

Although he had been on the losing side, Jonathan persuaded Demetrius II to affirm him as ruler over Judea, and even expand his territory.

Yet it wasn’t long until another civil war broke out in the Seleucid Empire: an ambitious general under Demetrius II, Diodotus Tryphon, wanted to place the young son of Alexander Balas on the throne and rule the empire through him. Once again Jonathan supported the reigning emperor, but in 143 BCE, when the tides of war began to turn and Diodotus Tryphon offered to make Jonathan’s brother Simon governor of the Mediterranean coast from Egypt to Tyre, the Hasmoneans switched allegiances.

But Jonathan was betrayed. Diodotus Tryphon took him captive, and later killed him. Simon however, the last living brother of Judas Maccabaeus, survived and inherited the roles of high priest and ruler of Judea from Jonathan; and naturally switched sides, supporting Demetrius II in his war against the man who had killed his brother.

Happy to have the Hasmoneans back on his side, Demetrius II recognized Judea’s independence, making Simon the first independent Jewish ruler of Judea since the fall of the Davidic Dynasty in 586 BCE.

The Stormy Reign of John Hyrcanus 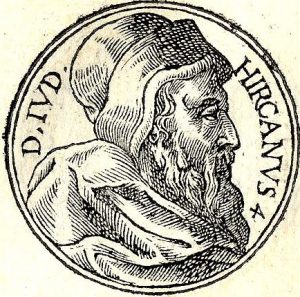 But Simon was not to reign long. He was assassinated in 135 BCE, together with two of his sons, at a banquet. His third son John Hyrcanus was not present and survived, becoming high priest and ruler of Judea.

Two years later a new Seleucid emperor, Antiochus VII, rose to power. He came down to Jerusalem with his army and forced John Hyrcanus to submit to Seleucid domination, and to join him in his war against the Parthian Empire. After this war was lost and the emperor was killed, John Hyrcanus returned to Judea.

By this time, John Hyrcanus had become thoroughly Hellenized and was disliked by the Judean populace. In 113 BCE, now freed from Seleucid domination, John Hyrcanus set out to enlarge his kingdom at the expense of the crumbling Seleucid Empire. He conquered Samaria to the north and took parts of Transjordan. When he died in 104 BCE, his kingdom stretched from the Galilee in the north to the Negev in the south, from the Mediterranean Sea in the west well into Transjordan in the east. 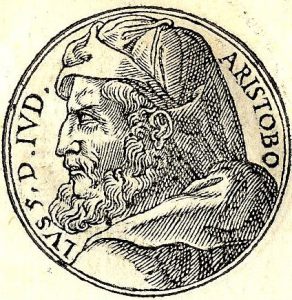 Aristobulus was a king of the Hebrew Hasmonean Dynasty, and the eldest of the five sons of King John Hyrcanus. / Wikimedia Commons

John Hyrcanus left the control of the kingdom to his wife, whose name is lost to history, and the high priesthood to his son Aristobulus. But, unhappy with this arrangement, Aristobulus had his mother starved to death and to further cement his rule, he threw three of his brothers in prison. One, a close confidant of his, remained free, but eventually Aristobulus grew suspicious of him too and had him killed.

Aristobulus was the first Hasmonean to actually crown himself king. Under his brief rule he expanded the territory of Judea into the Galilee and the Golan, then in 103, died of illness.

His wife Salome Alexandra released his brothers from prison and married the eldest of these, Alexander Jannaeus, in accordance with the biblical levirate law (Yibum).

Now that he was king, Alexander Jannaeus began to expand Judea, conquering the important port city of Acre, and then Gaza in 94 BCE.

Though successful on the battlefield, he and his Hellenic ways were despised at home. During one Sukkot holiday, as he was officiating the libation of water as a part of his duties as high priest, Alexander poured water on his feet instead of on the altar as tradition dictated. The shocked crowd pelted him with etrogim. In response he had the whole crowd – according to Josephus, over 6,000 men – put to death. 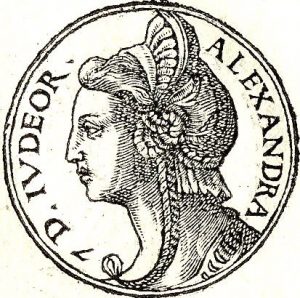 Salome Alexandra was the only Jewish regnant queen, with the exception of her own husband’s mother whom he had prevented from ruling as his dying father had wished, and of the much earlier usurper Athaliah. / Wikimedia Commons

Not long after that, the Pharisees, a powerful school of rabbis, incited a revolt that would turn into a six-year-long civil war, in which 50,000 Jews were killed.

At that point the Pharisees appealed to the Seleucid Empire for help, but the rebellion petered out after the Judeans decided they preferred to be ruled by a tyrant of their own then one ruling from Antioch. Alexander Jannaeus died in 76 BCE, leaving his kingdom to his wife, Queen Salome Alexandra.

The queen secured her power by siding with the Pharisees and establishing a rabbinical council with religious legislative powers and judicial authority – the Sanhedrin. She also built up the Judean army and fortified many of Judea’s cities and appointed her son Hyrcanus II as high priest – before dying in 67 BCE, and transferring the reins to him.

Hyrcanus II would rule for just three months before being overthrown in battle by his younger brother Aristobulus II. Undaunted, Hyrcanus Israeli allied with the Nabateans, who sent an army from the south and lay siege to Jerusalem in an attempt to reinstall him on the throne. But Aristobulus II appealed to his allies, the Romans, who had recently conquered the Seleucid Empire.

A Roman threat to invade the Nabataean kingdom was all that was needed to end the siege and send the Nabatean forces fleeing.

Not a Great Ally 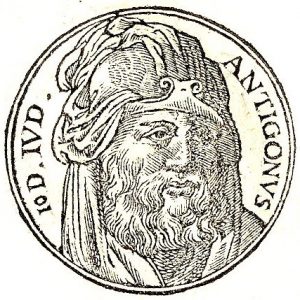 But Aristobulus II’s reliance on Rome was ill-thought. They arrested him and his sons, shipped them to Rome and reinstalled Hyrcanus II as puppet king of Judea.

Yet the real power lay in the hands of Antipater the Idumaean, a convert to Judaism and a servant of Roman interests in the region.

In 57 BCE, the Roman Senate released Aristobulus II and his sons from captivity, but he and his eldest son, Alexander died shortly after. The last remaining son, Antigonus II Mattathias, tried to obtain control of Judea by appealing to Julius Caesar during his visit in Syria in 47 BCE, but Caesar was not swayed.

By 40 BCE, Judea was simmering with revolt. The Judeans had wearied of the heavy taxes Rome levied and sickened of their overlords – King Hyrcanus II, Antipater, and Antipater’s son, Herod.

The Judeans rallied behind Antigonus II Mattathias, who promised them independence from Roman domination. He allied with the Parthians, conquered Jerusalem and was crowned king and high priest. His uncle Hyrcanus II was maimed so as to render him unfit for the priesthood and was shipped into exile in Babylon.

But Antigonus II Mattathias’ reign was short and tumultuous. The Romans appointed Herod as king of Judea and the two kings warred for three years.

Herod prevailed. Antigonus was taken prisoner and executed in Antioch in 37 BCE.

Mariamne convinced Herod to appoint her brother Aristobulus III as high priest; the following year Herod had Aristobulus III executed. That same year, Herod had the penultimate Hasmonean monarch Hyrcanus II return from Babylon to live in court as a honored guest, but had him executed in 30 BCE. And that ended the male Hasmonean line.

The Herodian Dynasty that would rule Judea over the next century had Hasmonean blood through Mariamne, who bore Herod two sons and two daughters. In their assimilation, they were a far, far cry from the family of priests from Modiin who, centuries before, had raised the banner of revolt against the Hellenization of Judea.