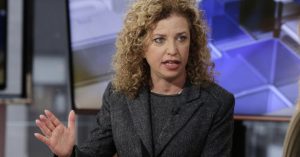 Bernie Sanders and his supporters have called for DNC Chair Debbie Wasserman Schultz to resign for months, saying the party under her leadership had put its thumb on scale in favor of Clinton. (Photo: Richard Drew/AP)

Though many progressives immediately responded by saying her ouster would not be enough to undo the damage her leadership has done, Democratic National Committee Chairperson Debbie Wasserman Schultz announced her resignation on Sunday afternoon, saying she would relinquish her post immediately following the party’s national convention which begins Monday.

Her announcement comes just two days after a batch of leaked internal DNC emails showed evidence that party officials during the primary season had attempted to tip the scales in favor of Hillary Clinton against the insurgent campaign of Bernie Sanders. The emails appear to show top officials contemplating how they can undermine Sanders by pushing stories about his Jewish faith and questioning his ability to keep his campaign organized.

Wikileaks managed to accomplish what many have attempted and failed to do for months now. https://t.co/b5MFcMIkbO

Following Sunday’s news, however, Clinton responded with a statement thanking her “longtime friend” for her service to the party and, seemingly without irony, announced that Wasserman Schultz would now serve as her campaign’s honorary chair.

“There’s simply no one better at taking the fight to the Republicans than Debbie,” Clinton said, “which is why I am glad that she has agreed to serve as honorary chair of my campaign’s 50-state program to gain ground and elect Democrats in every part of the country, and will continue to serve as a surrogate for my campaign nationally, in Florida, and in other key states.”

Throughout the campaign, Sanders and his top aides had expressed displeasure with “prejudice” exhibited by Wasserman Schultz in both deed and rhetoric. Since Spring, the campaign and many of its supporters had been calling for her resignation.

Not in time for it to matter very much, but those desires came true on Sunday.

“I know that electing Hillary Clinton as our next president is critical for America’s future. I look forward to serving as a surrogate for her campaign in Florida and across the country to ensure her victory,” Wasserman Schultz said in her statement. “Going forward, the best way for me to accomplish those goals is to step down as Party Chair at the end of this convention.”

As early as this morning, citing the leaked DNC emails, Sanders said it was past time for the chairperson to go. His reasoning, however, appeared to contradict Clinton’s response when he said his disappointment with Wasserman Schultz was not just because of the “prejudice” that she and her staff showed throughout the campaign, but the signal she sends to potential voters about where the country should be headed. “I think we need new leadership of the Democratic Party,” Sanders explained, “that is going to open up that party to working people and to young people—to have that kind of vitality we need to not only win the presidency, but also gain control of the Senate and the House as well.”

Meanwhile, the party’s communications director announced that longtime political operative and pundit Donna Brazile, currently the DNC’s vice chair, will take over as interim chair through the election.