In the Neolithic there were no maps. However, most times people knew where they were and how to reach their destination.

In the Neolithic there were no maps. However, most times people knew where they were and how to reach their destination. That is because, in their daily movements around the landscape, they used points of reference. Most likely there were no rules as to what constituted a good point of reference. In many cases, they were just adopted inadvertently, as people walked along the way, without even noticing. The repetition of similar movements time and time again around the landscape, generation after generation, made it very easy, even natural, for people to orientate themselves within known territory. Other times, certain places gained especial significance because of particular features that made them stand out: a mountain, a spring, a river. Often, importance was acquired because specific events had taken place there: the death of a person, a good hunting session, an encounter with an unusual entity (animal, human…), the abundance of a particular seasonal resource, etc. And sometimes, places stuck out because humans had altered or transformed them in some way. Thus, the landscape was full of implicit connotations and references, of memories and associations. For Prehistoric peoples, their landscape was their world, their cosmos. 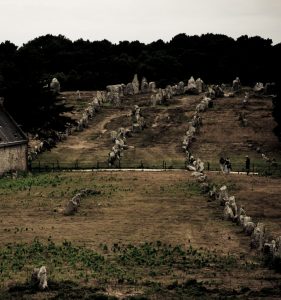 The Neolithic in general, and the adoption of agriculture in particular, must have had a tremendous impact in the way people moved around the landscape, and in how they viewed it. People may have moved less, and differently. The fact that human communities acted upon nature to obtain food and resources multiplied the number of physically ‘built’ or ‘constructed’ spaces. To an extent, landscapes began to be turned into what people needed them to be. Large scale structures, megalithic or otherwise, must have contributed enormously to that.

At different times, and a few centuries after the spread of Neolithic practices, Atlantic Europe saw the emergence of hundreds of monumental structures, both megalithic and non-megalithic. It is important to note that ‘Atlantic Europe’ here has to be taken in very broad terms: together with undoubtedly ‘atlantic’ regions such as Britain, Ireland, Western France or Western Iberia, it includes Southern Scandinavia and the northernmost areas of France, the Low Countries, Germany and Poland, as well as some landscapes of the Western Mediterranean. In said regions, they tend to be the most conspicuous form of Neolithic architecture, and the most visible form of archaeological evidence. 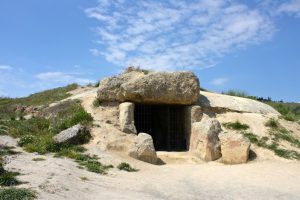 Likewise, the term ‘monumental’ has to be understood in a specific way. Here it refers to the scale of building activity, that is, to the enormous size of most of these structures in relation to everything else erected by humans at the time. It also highlights the extraordinary labour forces needed to undertake their construction. Their huge dimensions do not necessarily entail specific functions. They may or may not have been ‘monuments’ in its most restricted sense of ‘structure built to commemorate events in the past’. In fact, the reasons that led people to build them remain very much under discussion. 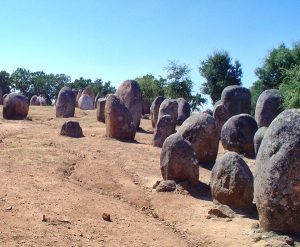 There was considerable diversity in their form and perhaps their meanings and purposes. Some were ‘megalithic’, that is, built using big stones. Others must have been constructed with earth, smaller stones, timber or other perishable materials instead. Some were erected in open air, while others constituted true buildings themselves, with a clearly distinguishable inside and an outside (e.g. megalithic tombs). Some of them tend to be associated with human remains, a sign that they were probably used for burial or for rituals related to the ancestors (e.g. chambered tombs), whereas others are isolated and lack any kind of obvious association (e.g. ‘menhirs’). 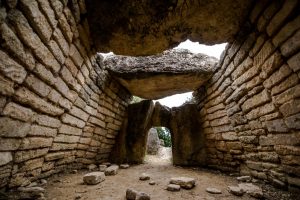 Among the most common forms we can mention: 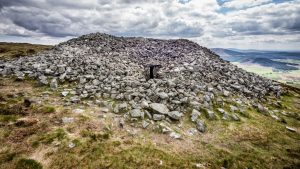 Neolithic passage tomb on the summit of Seefin Mountain, County Wicklow, Ireland. The tomb is covered by a huge circular cairn which is 24 metres in diameter, 3 metres in height and has a kerb of large boulders. A narrow passage, 11 meters in length, opens into a rectangular chamber, in which there are five recesses. Copyright © Joe King 2013 – Creative Commons Attribution-ShareAlike (CC BY-SA) 3.0 Unported

Despite the aforementioned variability, the persistence of these practices across vast areas of Neolithic Europe means that ideas, traditions or behaviours were exchanged and transmitted from group to group with relative ease. This can be seen, for example, in the so-called ‘megalithic art’. In distant parts of the continent, both the megaliths that formed many chambered tombs (‘orthostats’), and single standing stones (‘menhirs’), often were decorated with paintings and carvings depicting widely spread symbols, such as crooks, polished stone axes or geometric motifs. For some researchers, the broad distribution of megalithic and non-megalithic monuments and some of their features, suggest the existence of shared cosmologies or beliefs.

Monumental structures provide a context for the construction of Neolithic ditched enclosures in Europe. There is some mutual overlapping in space and time. The geographical distribution of megalithic and non-megalithic structures, albeit different from that of ditched enclosures, partially coincides with it. Ditched enclosures have been identified in many of the regions where varied forms of monumental architecture —megaliths, mounds, cairns, etc.— are common. Likewise, the construction of these monuments and that of ditched enclosures is somewhat close in time. While they may not be exactly synchronous, most of them were erected within the same time interval (4th-3rd millennia BCE). They were, to put it simply, roughly contemporary. All this allows us postulate that, very often, ditched enclosures were constructed by the same peoples that built all kinds of megalithic and non-megalithic monuments. Or, at least, that the builders of both of these entities were, in very broad terms, culturally related somehow. It seems reasonable, therefore, to believe that certain inferences about the societies that constructed the megaliths that populated the landscapes of Atlantic Europe, could also provide some information about the constructors of ditched enclosures. These inferences could be:

All in all, a considerable number of Neolithic communities of Europe, must have had, at times, the technical know-how, the organisational capacity and the labour force to build amazing stuff. The execution of collective works, while difficult, was entirely feasible.

Like we said earlier, the purpose of Neolithic monuments is unknown. But it is clear that they transformed the landscapes of Europe like never before. It is in this context of progressive monumentalisation that Neolithic European ditched enclosures were erected, at different times, in varied places, with diverse forms.

Originally published by the Enclosures in Neolithic Europe under a Creative Commons Attribution 4.0 International license.