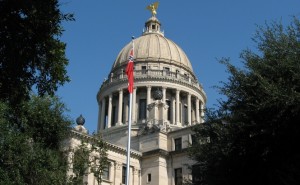 The Mississippi Senate voted late Wednesday evening 31-17 to pass the most aggressive anti-LGBT legislation in the nation, House Bill 1523.  This new version will be resubmitted to the House, which passed the old one 80-39.

This bill includes the ability for those opposed to same-sex marriage and same-sex issues in general to provide services even if they receive government funding.  This bill allows discrimination by businesses which receive money from the public dole.

Mississippi Governor Phil Bryant has not commented on whether he will veto or sign the legislation.  Georgia’s governor, initially set to sign similar legislation there, ultimately vetoed in under pressure from companies and other states to pull revenue from Georgia.  North Carolina now faces the the same dilemma.

The Human Rights Campaign President Chad Griffin writes, “This legislation moves Mississippi backward, undermining equality for its residents and jeopardizing its ability to attract and retain fair-minded businesses.  Governor Byrant should be paying close attention to the backlash against discrimination in Georgia, where Gov. Nathan Deal vetoed a terrible anti-LGBT bill, and in North Carolina, where fair-minded people and the broader business community are calling on state leaders to repudiate and repeal the discriminatory law passed last week. Mississippi’s economy and its reputation hang in the balance.”

The governor has, however, said he does not think the bill allows for discrimination.

According to Buzzfeed, the bill “would protect those who believe “sexual relations are properly reserved” to opposite-sex marriages, and that being male or female is “objectively determined by anatomy and genetics at time of birth.”