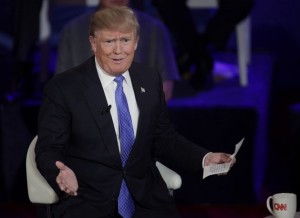 Critics of Donald Trump’s presidential campaign often complain about the way the media has reported on his candidacy. It is not just the incessant coverage that riles them. It’s the perceived lack of fact-checking.

Trump is known for making outlandish and dubious claims with little connection to the truth. The press corps, these critics argue, allows him to float along in a perpetual state of unreality.

The truth is, Trump is routinely fact-checked. It’s just that he makes so many statements in such a rapid and continuous fashion that it becomes virtually impossible to keep up.

On Wednesday, The Huffington Post assigned five and a half reporters to look into a roughly 12,000-word transcript of Trump’s town hall event on CNN the night before. It took us hours, but in all, we found 71 separate instances in which Trump made a claim that was either inaccurate, misleading or deeply questionable. That’s basically one falsehood every 169 words (counting the words uttered by moderator Anderson Cooper), or 1.16 falsehoods every minute (the town hall lasted an hour, including commercial breaks).