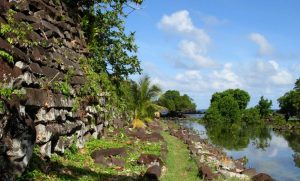 Sometimes art and architecture calls on us to reimagine what we think was possible in the past, and what ancestors were able to achieve. 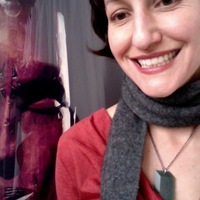 How did they do it?

Sometimes art and architecture calls on us to reimagine what we think was possible in the past, and what ancestors were able to achieve. The abandoned megalithic capital of Nan Madol, located in a lagoon adjacent to the eastern shoreline of the island of Pohnpei in the Federated States of Micronesia in the Pacific Ocean, is a terrific example. [1] Once the political and ceremonial center for the ruling chiefs of the Sau Deleur dynasty (c. 1100–1628), Nan Madol is a complex of close to 100 artificial rectilinear islets spread over 200 acres that are thought to have housed up to 1000 people. Its basalt and coral rock structures were built from the 13th to the 17th century by a population of less than 30,000 people and their total weight is estimated at 750,000 metric tons. Archaeologist Rufino Mauricio pulls these vast quantities into focus for us by explaining that the people of Pohnpei moved an average of 1,850 tons of basalt per year over four centuries—and no one knows quite how they did it. [2] 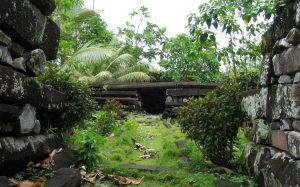 Nan Madol specialist Mark McCoy has used the chemistry of the stones to link some to their source on the opposite side of the island. [3] The creators of Nan Madol managed to quarry columns of basalt from a site in Sokehs, on the other side of Pohnpei, and transport them more than 25 miles to the submerged coral reefs that are the foundations of Nan Madol. There, they used ropes and levers to stack them in an intersecting formation, making raised platforms, ceremonial sites, dwellings, tombs, and crypts. They used no mortar or concrete, relying solely on the positioning and weight of each basalt column, with a little coral fill, to hold each structure in place. 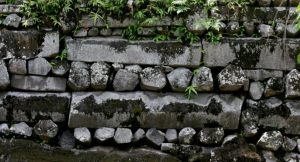 The human power required to move these materials over such an extended period of time and space is evidence of an impressive display of power by the rulers of Pohnpei as well as ecological and economic systems capable of supporting a busy labor force.

Sometimes oral histories are able to explain the extraordinary feats of men in ways that present-day science cannot replicate. Oral histories of Nan Madol describe great birds or giants moving the basalt rocks into place, others recall the magic used by the twin sorcerers Olosohpa and Olosihpa to create a place to worship their gods. Beyond these creation narratives, aspects of the oral history of Nan Madol, passed down through many generations, correlate with archaeological evidence. For example, oral histories describe a series of canals cut to allow eels to enter the city from the sea. A well on the island of Idehd is said to have housed a sacred eel who embodied a sea deity, and to whom the innards of specially raised and cooked turtles were fed by priests. Traces of the canal system as well as a large midden (mound) of turtle remains on Idehd are among the archaeological evidence that supports these histories. 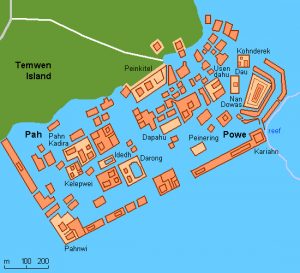 While the exact engineering of Nan Madol eludes us, we know that the construction of elevated, artificial islets had commenced by 900 to 1200 C.E., and that around 1200 C.E. the first monumental burial took place when a chief was interred in a stone and coral tomb. This significant ceremonial event was followed by a period of truly megalithic building from 1200 to 1600 C.E.

Madol Pah in the southwest was the administrative center of the complex and Madol Powe in the northeast was its religious and mortuary sector. This area comprises 58 islets, most of which were inhabited by priests. The most elaborate building is Nandauwas, the royal mortuary, which covers an area greater than a football field. Its walls are 25 feet high and just one of its cornerstones is estimated to weigh 50 tons. Elsewhere, log-cabin style walls of stone reached 50 feet in height and are 16 feet thick, and were topped with thatched roofs. All were protected from surging tides by large breakwaters and seawalls. 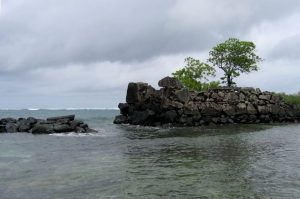 What’s in a name?

Archaeological and linguistic evidence suggest that certain islets were dedicated to specific activities—Dapahu to food preparation and canoe building, and Peinering (“place of coconut oil preparation”), Sapenlan (“place of the sky”) and Kohnderek (“place for dancing and anointing the dead”) to the activities their names describe. Tombs surrounded by high walls can be found on Peinkitel, Karian and Lemonkou. 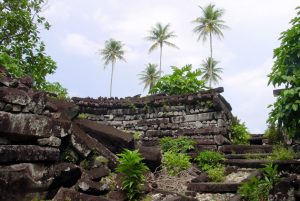 Nan Madol is simultaneously an engineering marvel, a logistical puzzle, and the product of a sophisticated economy and highly stratified society—all presided over by a dynasty known as the Sau Deleurs. Who were these leaders who inspired (or perhaps coerced) the people of Pohnpei into such a long-term and physically challenging undertaking? Many oral histories describe them, and there are many possible interpretations of these, but most agree that for many centuries Pohnpei was under the rule of a series of chiefs (Sau) descended from Olosohpa, who began as gentle leaders but came to exert extraordinary power over their people before deteriorating into tyrants. Under their rule the people of Pohnpei not only built the Nan Madol structures, but also made tributes and food offerings to the Sau Deleur, including turtles and dogs, which were reserved for their consumption. This period of history is remembered as the “Mwehin Sau Deleur”—the “Time of the Lord of Deleur.”

The dynasty was overthrown by the culture hero Isokelekel, who destroyed the last of the Sau Deleurs in a great battle. Following his victory, Isokelekel divided power into three chieftainships and established a decentralized ruling system called Nahnmwarki which remains in existence today. He took up residence at Nan Madol on the islet of Peikapw. A century later, his successor abandoned the site and established a residence away from Nan Madol. The site gradually lost its association with prestige and its population dwindled, though religious ceremonies continued to be held here from time to time into the late 1800s. 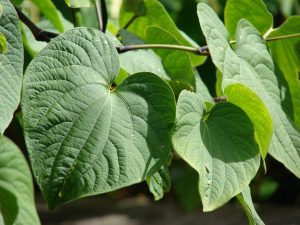 The garden of Micronesia

Pohnpei is rich in natural resources and has been called “the garden of Micronesia.” It has fertile soil and heavy rainfall, that promotes the growth of lush vegetation from its coastal mangrove swamps to the rainforests at the apex of its central hills, as well as lagoons. These natural resources would have provided the necessary food for the workers who built the extraordinary complex that is Nan Madol, as well as timber that may have been used to help shift the basalt rocks. It seems unlikely that any foods were cultivated within Nan Madol, and likely no source of freshwater existed within the complex—food and water were brought from the island’s interior. 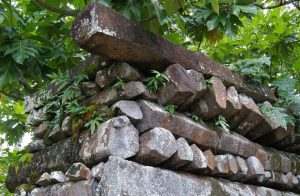 The basalt columns used to build Nan Madol are almost as extraordinary as the megalithic structures they comprise. Columnar grey basalt is a volcanic rock that breaks naturally into flat-sided rods when it cools. Though it appears quite marvelously to have been shaped by chisels, its predominantly hexagonal or pentagonal columns are due to natural fractures that form while a thick lava flow cools. Rapid cooling results in slender columns (<1 cm in diameter) while slow cooling results in longer and thicker columns. Some of the columns used to build Nan Madol are up to 20 feet long and weigh 80–90 tons. [4]

A space between things

In July 2016, Nan Madol was declared a UNESCO World Heritage Site. The dedicated UNESCO webpage explains that “The huge scale of the edifices, their technical sophistication and the concentration of megalithic structures bear testimony to complex social and religious practices of the island societies of the period.” [5] It also describes how siltation of the waterways that are an integral part of this site is allowing an overgrowth by mangroves. Both the mangroves and the siltation are threatening the structures themselves.

Since Nan Madol was built on a coral foundation, it is sometimes called “the Venice of the Pacific.” Like Venice (which is made up of 117 islands), the islands of Nan Madol are connected by a network of tidal channels and waterways. These are referred to in the name Nan Madol, which means ‘in the space between things’—here, as elsewhere in the Pacific, waterways are described as connectors of people and places rather than barriers. The waterways might be local, like the canals of Nan Madol, or expansive, like the great Pacific Ocean, the largest body of water on Earth.

To get a sense of the extent of this space between things, it is instructive to zoom in on Nan Madol using an online mapping system. Pinpoint Sokehs Pah while you are at it, so you can also see the distance between this quarry and the ancient capital built from its rock supply. Then, frame by frame, zoom out. Marvel at the space that unfolds as you ponder what motivated the Sau Deleur dynasty to build such an expansive, impressive and intimidating structure, and just how they might have achieved this.