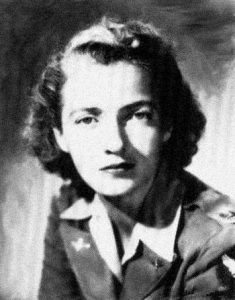 Nancy Harkness Love was a trailblazing WWII pilot and commander who was instrumental in the founding of the Women Airforce Service Pilots (WASPs) of WWII, the first women in history trained to fly American military aircraft.

We were in the air flying from Boston to Vassar College to visit friends when I noticed ugly clouds coming from the west and they were moving fast. It was then that I realized I had never used an aircraft compass before. I couldn’t read it!

“My two passengers, schoolmates from Milton Academy, were sitting in the back. Our luggage was in the right seat beside me. They had no idea how inadequate and frightened I suddenly felt. In the first place, the ship was far too large and complicated for my fifteen solo hours.

“Now, I couldn’t see. I flew lower and lower in an effort to see out. With that, the oil gauge broke and smeared black stuff all over the windscreen. That meant I had no visibility at all to the front. I had to hang my head out the open side window. My inflamed imagination convinced me the motor was about to stop. I picked out a field that looked smooth—it was winter, so not much vegetation—and I landed. Lucky for me and my passengers, we and the ship were still intact.

“I was sixteen years old. That flight taught me a great deal in a short time. It ended happily, but due to age and inexperience seemed tenser than any later experience in an airplane.”

Reporters frequently asked Nancy how and why she learned to fly. Her response was,

I have no idea what made me catch the flying bug. A ride in a tandem two-seater, single-engine Fleet Biplane was my undoing and from then on I knew what I wanted.

“It was a classic example of the blind leading the blind. My instructor, Jimmy Hansen, had a brand new license and I was his first student. It was wonderful fun and quite routine at the time. I don’t think he knew what made the plane stay in the air. At least he never told me. My instructions were just to ‘keep up the flying speed.’”

She soloed on August 31, 1930, with only four hours and thirty minutes flying time. By September 10, she had earned the hours necessary for her private pilot’s license. 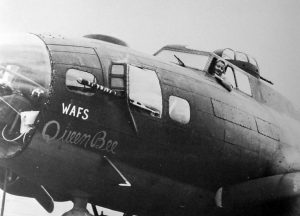 In the fall of 1931, Nancy Harkness enrolled in Vassar College. She envisioned a career in education and declared French and French history as her majors. But the lessons that made her heart sing were the ones she learned at Poughkeepsie Airport in pursuit of her limited commercial license, which she earned at age 18. She earned her transport license at 19.

But Nancy had to leave Vassar after the fall 1933 semester. Her family’s finances fell victim to the Great Depression. In 1934, she went to work as a utility pilot for Robert “Bob” Love, who had recently established a flying service, Inter City Aviation, at East Boston Airport (Logan Field today). In 1935, Nancy was hired for the Bureau of Air Commerce’s Air Marking program, run through the Works Progress Administration (WPA) part of President Roosevelt’s New Deal. Air Marking was an innovative aid to air navigation. In 1936, she married Bob Love. As a test pilot, she flew two experimental aircraft, a “safety Plane” and an “aircar,” both equipped with the new “tricycle” landing gear—the little wheel is in front rather the rear. She returned to Airmarking in 1937 and then to her husband’s business.

What she did between 1942-1945, World War II, forever changed women’s role in aviation and in its history.

Early in the war, the Army was desperate for ferry pilots to move newly built, small single-engine trainer aircraft to the training fields in the South. Colonel William H. Tunner, the commander of the Air Transport Command’s Ferrying Division, heard Nancy’s proposal to recruit experienced women pilots for the job. He gave her the go-ahead. Initially, she recruited twenty-eight women who became known as the WAFS: the Women’s Auxiliary Ferrying Squadron. 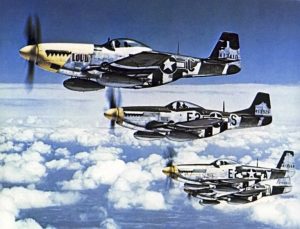 Nancy was the first woman to fly the P-51 Mustang, the Army’s fastest pursuit plane.

Nancy led the way for her women pilots to fly bigger, more complex airplanes when, on Feb. 27, 1943, she was the first woman to check out in the P-51 Mustang—the Army’s fastest pursuit plane. With that, the transition of women into the Army’s hottest airplanes was on. Eventually 130 women would qualify to ferry pursuits.

By June 1943, Nancy commanded four squadrons—each roughly twenty-five women strong. The WAFS’ numbers had quadrupled with the addition of graduates of the Army’s flight training facility for women advocated and administered by renowned, 1930s record-setting aviatrix Jacqueline Cochran. They were known as the Women’s Flying Training Detachment or WFTDs.

In late June, Cochran was named director of all the women pilots flying for the Army and Nancy Love was designated executive for the women flying for the Ferrying Division. On August 5, 1943, all the women flyers became known as WASP (Women Airforce Service Pilots) rather than by the two acronyms, WFTDs and WAFS. In all, 1,102 women would qualify to fly for the Army in WWII. Of that number, 303 flew for Nancy Love and the Ferrying Division.

A yearlong battle to militarize the civilian WASP ensued, but the efforts were in vain. In October 1944, the WASP were notified that they would be deactivated on December 20, 1944. With male combat pilots returning from the warzone, their services would no longer be needed.

But the ATC had one more assignment for Nancy Harkness Love.

Familiar with domestic Ferrying Division operations and a veteran troubleshooter through her work with the WASP, Nancy was sent abroad to check out the overall efficiency of the ATC’s China-Burma-India (CBI) supply route. General Tunner now commanded the vital “Hump Operation”—cargo airplanes that flew supplies over the Himalayan Mountains and the jungles of Burma to China to help fight the Japanese from the Asian mainland.

Armed with security clearance and passport and with orders in hand to fly halfway around the world, Nancy Love reported to the New York Aerial Port of Embarkation at La Guardia Field on December 27, 1944. Destination Calcutta. She was part of ATC Deputy Commander General C.R. Smith’s one-month inspection tour of Tunner’s Hump operation. But, rather than accompanying Smith to India, Nancy was assigned to fly the supply route to India as a passenger on a military transport. She was to look for procedural problems along the way, which she did, and to make a detailed report. 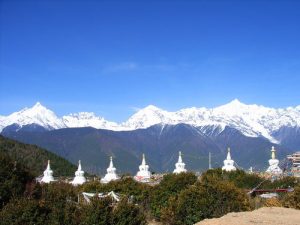 The Hump is a section of the Himalayan Mountains that was extremely dangerous to fly over. (Photo by “Webturtle” via Wikimedia Commons.)

As of December 20, 1944, Nancy no longer had official flight status with the Army, but her military flying was not yet complete. On January 8, 1945, she became the first woman pilot to fly The Hump—courtesy of Generals Smith and Tunner. When she climbed into the cockpit of General Smith’s four-engine C-54 in Calcutta — headed for Kunming, China—she had logged nearly 50 hours flying time ferrying that aircraft and a total of 1,685 hours, civilian and military flying combined. She was NOT short on experience.

After her Hump flight, she made several more flights within the borders of India to check on efficiency of operations, as ordered. On these flights she flew a staff twin-engine B-25.

Then she returned to the cockpit of the C-54. “I left Calcutta on 29 January with General C.R. Smith and his Aide, Captain Wiseman, and returned to Cincinnati via Australia, arriving here on 6 February.” What she didn’t write was that she actually flew twenty hours of the fifty-plus-hour trip from Calcutta to Hickam Field in Honolulu landing in Ceylon (now known as Sri Lanka), Australia, New Guinea, Indonesia, and the embattled island of Tarawa on the way.

Back at Ferrying Division Headquarters, Nancy concluded her Trip Report dated February 9, 1945. With that, the name Nancy Harkness Love disappeared from the duty rosters of the Ferrying Division, ATC, USAAF.

But what a legacy she left!

Nancy’s planning and persistence proved to her Army superiors that women could serve the Armed Forces during wartime. Her personal prowess in a succession of increasingly complex Army airplanes opened the way for the women ferry pilots who served under her. Women flew everything the Army built. Nancy believed women pilots should be handled the same as the male pilots—allowed simply to advance based on their flying abilities and not be segregated in a separate command. She and Jackie Cochran were diametrically opposed on this. Cochran wanted a separate women’s air corps established under a woman commander. Today, it is Nancy’s way that has taken root in the American military system, but establishing it took the better part of forty years.

Seventy-five years after learning to fly, Nancy Harkness Love was enshrined among aviation’s luminaries in the National Aviation Hall of Fame in Dayton, Ohio, on July 16, 2005. She was the ninth woman inducted. What she did enroute to the Hall of Fame is the stuff of mid-20th century American patriotism and resolve. 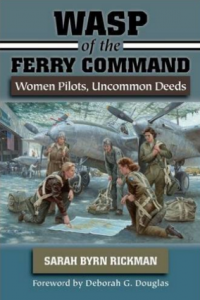