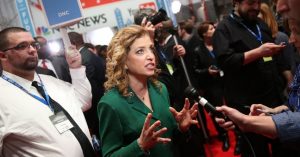 After leaked DNC emails, Rules Committee vote on superdelegates was seen as key test of party unity ahead of convention

After several  rounds of voting Saturday afternoon, an effort by progressive Democrats to abolish what they see as the anti-democratic superdelegate process was defeated.

The amendment, co-sponsored by 52 members of the committe, was defeated when 108 voted against and just 58 voted in favor.

Though a stinging defeat for those who campaigned in favor of the rule change, spearheaded largely by Bernie Sanders delegates and progressive advocacy groups, supporters took solace that because they more than one-quarter of the committee voted ‘yes’ they will able to introduce a minority report during the full convention next week and demand a floor vote.

58 vote in favor of amendment to #EndSuperDelegates, enough to file a minority report & send it to the floor of the convention.

And how might this impact party unity going forward?

The reaction to the news among individuals and groups backing Sanders was swift, with many indicating they are ready to continue pressing their case on this, and other issues, throughout the events in Philadelphia:

DNC rules committee has now voted:
– NO to eliminating superdelegates
– NO to reducing their power by 90%

Amendments to eliminate or limit the power #superdelegates voted down. Ready to #BernItDown? https://t.co/IdVmViw5fl#DemsInPhilly

Democratic delegates for Bernie Sanders and other concerned citizens protested outside the closed doors of a Democratic National Convention’s Rules Committee meeting in Philadelphia on Saturday as they rallied in favor of party reforms, including a demand superdelegates be abolished from the primary process.

The Real News Network captured some of the scene and spoke to several delegates concerned about the process in this short segment:

And this short clip also offered a look inside the room as committee members deliberated:

Mood inside/outside Rules Committee at #DemConvention as it leads early vote on whether to abolish #superdelegatespic.twitter.com/1sG1vPxNXw

Ahead of Monday’s kick-off to the full DNC convention, the final round of voting by the Rules Committee is seen by Sanders delegates as a way to make the nominating process more democratic in future cycles and comes amid widespread belief that superdelegates—comprised of former and current elected party leaders—give an unfair advantage to establishment candidates while frustrating the desires for more progressive or transformative change.

As Common Dreams reported earlier in the week, more than 130,000 people have signed a petition in support of the effort, and more than 50 Rules Committee members co-sponsored the amendment to end the superdelegate system that will be voted on Saturday.

Though Saturday’s meeting was filled to capacity and conducted behind closed doors, the progressive advocacy group Demand Progress posted this Periscope video from inside the proceedings that featured approximately 16 minutes of the debate centered on the superdelegates issue:

At a press conference ahead of the meeting, Rhode Island State Rep. Aaron Regunberg (D-Providence), a member of the committee and selected by colleagues to introduce the amendment, explained why the abolition of the superdelegates is so important both for the party and voters.

“It is our belief as sponsors of this resolution that our Democratic Party’s internal structure and processes need to reflect our core values,” said Regunberg. “I’m a Democrat because I believe in democracy. I believe in our party’s voters. And I believe in the power of one person-one vote that is the bedrock of our political system.”

The proponents of eliminating superdelegates may have gotten a boost on Friday when leaked emails from the Democratic National Committee show party officials openly mocking the Sanders campaign, including his backers’ efforts to eliminate superdelegates. Donna Brazile, DNC vice chair for civic engagement and voter participation, called a resolution by the Maine Democratic delegation in favor of getting rid of superdelegates “another lunacy.”

The revelations have bolstered a perception among Democratic activists that party officials and elites tried to rig the outcome of the nominating process.

Common Dreams was among the many outlets reporting Friday on the newly-leaked DNC emails which confirmed a level of collusion repeatedly denied by top party officials throughout the primary season. The response on social media to the contents of emails captured the frustration of many Sanders supporters who felt as thought the process was rigged from the start:

Indeed @chrislhayes and those of us supporting @BernieSanders saw the tea leaves. #DNCleakhttps://t.co/leDglx9hFF

@ggreenwald Of course, claiming that #DNC conspired with HRC against Sanders is irresponsible crazy talk. pic.twitter.com/jgq4L8q7LZ