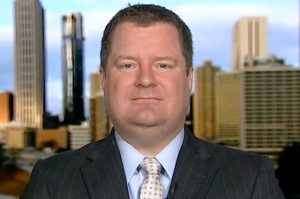 In spite of the column’s title, Erickson uses the colum to reaffirm his unwillingness to vote for Trump, whose campaign he calls un-American. He writes that he sees Trump “corrupting the virtuous and fostering  hatred, racism, and dangerous strains of nationalism.” (He also says, for the benefit of those who accuse him of being pro-Clinton, that he believes her campaign is anti-American.)

That I see so many Christians justifying Donald Trump’s immorality, defining deviancy down, and turning to anger and despondency about the future tells me I cannot in good faith support Donald Trump because his victory would have lasting, damaging consequences for Christianity in America. We harm our witness and the testimony of the strength of our Lord by embracing the immoral, unrepentant strong man. We harm our American virtue by buying into the idea that one man can make America great again. Further, we risk losing Donald Trump’s soul for the sake of our selfishness.

In the column, Erickson criticizes Trump supporter Janet Parshall, referring to their recent debate as an example of the church being “poisoned from within.”

Erickson also slams Wayne Grudem for trying to justify support for Trump after having written in 2012 that if evangelicals didn’t support Romney, they would end up with Rudy Giuliani, “a pro-abortion, pro-gay rights candidate who is on his third marriage and had a messy affair prior to his divorce from his second wife. Then we will lose any high moral ground and the enthusiasm of the evangelical vote.” Asks Erickson, “How now can Grudem advance his witness to questioning unbelievers? He now praises an unrepentant man both guilty of and proud of the very sins he attacked Giuliani for.”

In response to a question from Deace about conservative fear-mongering about the consequences of the election—that the country could not survive a Clinton presidency—Erickson noted the same was said about Obama. Erickson says he tries not to demonize his opponents, saying that while he believes Hillary Clinton should be in jail, “she’s no Vladimir Putin.”

“This election is not the end of the world,” said Erickson, adding that the question that people will be asking the day after the election will be “who sold their soul and who didn’t?”

When Deace asked what his vocal opposition to Trump has cost him, Erickson said his radio show has lost advertisers, his kids have been yelled at in the grocery store, and he has had to hire armed guards to protect his house.