The Intervention of the Sabine Women (detail), by Jacques-Louis David, 1799 / Louvre Museum, Paris

Protesting was a key part of Roman political life. And protesting was fueled by the fact that the Roman Republic, from its founding in 509BCE onwards, percolated with political tensions and turmoil. Roman writers, such as Livy (author of Ab Urbe Condita, a history of Rome from its founding through the 1st century BCE) emphasize that volatile but non-violent demonstrations instigated political change during the early and mid Republic. Interestingly, it was not just the men of Rome that sought justice through protest; Roman women did as well. Despite their limited legal and political rights, Roman women, particularly married ones, felt emboldened enough to dispute laws, political decisions, and even war. That women protested and triggered political change might seem surprising to us. We often assume that women in the ancient world lacked power and that men controlled the political arena exclusively. Although Roman men did not like it, the unofficial involvement of women in politics became an established Roman custom.

Most often, women who engaged in protest were freeborn, elite, and married. They protested several issues, and sometimes they succeeded in achieving their goals. Some protests related to the safety of the state, while others targeted more female-oriented goals, such as marriage reform, the abolition of sumptuary laws, and changes to judicial rights for priestesses known as Vestal Virgins. They employed a variety of methods, from public demonstrations, to financial support for particular causes, to the more questionable action of mass poisoning. Women were even part of Rome’s most famous conspiracies, such as the Bacchanalian affair in 186BCE and the Conspiracy of Catiline in 63BCE. These women’s ability and choice to engage in protest can be understood from two public demonstrations recounted in Livy’s Ab Urbe Condita, one from legend and the other a confirmed historical event. 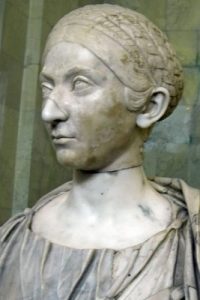 Rome was the quintessential patriarchy in which a single male head of household held exclusive power over those within it. The Romans called this figure the paterfamilias. He alone controlled the family’s wealth and theoretically had the power of life and death over all members, both female and male. This could include his younger siblings, adult children, his children’s children, and slaves, both female and male.

Women in Roman society could not vote or hold office. Most women spent their lives under the guardianship of an adult male relative, usually their paterfamilias, husband, or son. Still women in Rome led relatively public lives, particularly compared to their counterparts in democratic Athens. Women in Roman society dined with their husbands as well as with men to whom they might not be related. They could inherit, own, and sell property. Women were out and about in the city; they went to public games, festivals, and the theater. Some women held important religious positions, most notably the Vestal Virgins. The figure of the matrona, a loyal wife and mother, was celebrated in art and literature. Moreover, Roman history is littered with named women who, for good or ill, helped shape it.

The Sabine Women and the First Public Demonstration in Rome 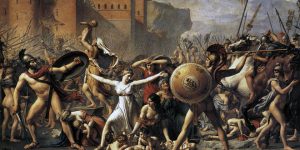 The Intervention of the Sabine Women, by Jacques-Louis David, 1799 /  The Louvre Museum, Paris

The establishment of women’s public lives, particularly that of the matrona, actually originated in one of Rome’s foundation myths: the rape of the Sabine women. While this may seem to us an unusual event to establish traditional authority for women, it reveals the ideological importance and authority of women in Roman society. According to Roman tradition, this event occurred before the beginning of the Republic, when kings ruled Rome. According to Livy, Romulus (the founder of Rome) allowed any undesirable person in central Italy to become a Roman in order to populate his city. Though they are not mentioned, this probably included several women. However, these women could never become respectable wives in the eyes of Romans. The ideal wife, a matrona, conferred honor and legitimacy on her husband and family; a disreputable woman would not do.

Romulus and his men wanted legitimacy and respect, so they sought out proper marriages with the daughters of the neighboring Sabine people, none of whom wanted to marry their daughters to outcasts. So Romulus and his men took the women by force and trickery. They invited the Sabines to public games, and when Sabines came with their wives and daughters in tow, the Romans snatched the young, unmarried women. Shortly thereafter, the city of Rome experienced its first public demonstration, led by the abducted Sabine daughters.

As Livy explains, after their abduction, Romulus promised the Sabine women that “…they would live in honorable wedlock, and share all their property and rights, and – dearest of all to human nature – would be the mothers of freemen.” Romulus then “begged them to lay aside their feelings of resentment and give their affections to those whom fortune had made masters of their persons. An injury had often led to reconciliation and love; they would find their husbands all the more affectionate, because each would do his utmost, so far as in him lay, to make up for the loss of parents and homeland.” Romulus declared the women partners, not prisoners. While this promise could be dismissed as an attempt to placate the traumatized women, it is in fact a contractual agreement of sorts. Livy’s account depicted the women as satisfied with Romulus’ plea. In actuality, the women likely did not have much of a choice. The loss of their virginity would have made it difficult if not impossible to find a good marriage had they escaped their Roman captors. While Roman law recognized that a woman was not responsible in the case of rape, she would still have suffered a devastating social stigma.

Although the Sabine women accepted their situation, their fathers still fumed and led an army to seek vengeance against Rome. This took place long after the abduction, since many of the women had born children. As the armies of the Sabines and Romans were poised to clash in battle, the Sabine women intervened. They physically positioned themselves on the battlefield, between husbands and fathers, and pleaded for the men to make peace. They used persuasive techniques customary for Roman women; they appeared disheveled, cried, and tore their clothing. Their display managed to sway both armies and the battle ended without any loss of life. Sabines and Romans became allies and a Sabine, Titus Tatius, even ruled alongside Romulus.

This, of course, is a legend for which no historical evidence exists. Still, the Sabine women, the idealized matronae, were portrayed as being protectors of the state and the family. They forcefully entered a male space, the battlefield, and achieved a political goal through that action. This tale and Romulus’ promise reflect that, although women had no official political authority in Rome, they did possess a traditional authority as protectors and partners, particularly when they achieved the status of matrona. Livy associated the establishment of that customary agreement with Rome’s founder.

Women’s Demonstrations against the Lex Oppia 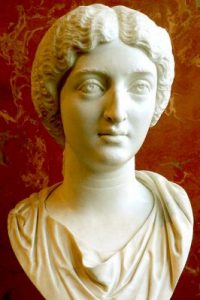 Although women did not hold official political power, they still exercised a customary authority that allowed them (from their perspective at least) the right to weigh in on issues that affected them. They expressed this authority by opposing a sumptuary law, the lex Oppia, which was passed in 215BCE during the 2nd Punic War, when Rome was struggling economically. The law specifically targeted women; they were forbidden from having more than half an ounce of gold, wearing purple clothing, and riding in a horse-drawn carriage in a city or within one mile of it unless participating in a religious function.

Following the war’s end and the city’s economic recovery, Roman women decided the law was no longer justified. In protest, the married ones (Livy used the word matronae) left their houses, filled the streets, and took over the Roman Forum, which was the administrative, economic, and social center of the city. Livy stated that neither the magistrates, their husbands, nor any sense of propriety could keep the women indoors. To be clear, this was an unusual event. Historian Richard A. Baum described the demonstration against the lex Oppia as “the most striking manifestation of women’s power in the whole of Roman history.”

After the women approached the magistrates with their demands, a public debate ensued between two officials: Cato the Elder, who opposed repeal, and Lucius Valerius, who supported it. While Cato launched an attack against the women for not obeying their husbands, Valerius argued the injustice of the law that denied women the benefits of Rome’s thriving economy. He also highlighted times when women were responsible for saving Rome itself. He began naturally with the Sabine women, who rushed onto the battlefield to save their families and city. His speech emphasized the role of women as protectors of Rome, and his argument about injustice recalled the promise Romulus made: a promise of shared property and shared civic rights. Ultimately Valerius’ argument convinced the Senate that the law was unjust, so it was repealed. Women may have had different duties and responsibilities in Roman society, but they were still viewed as important members of society who contributed in their own gender appropriate ways.

The Romans by no means romanticized this demonstration or glorified the women involved. Cato’s speech on the insolence and greed of the women leaves the reader thinking it might be reflective of the author’s own feelings. Nevertheless, the event was important enough for Livy to include in his great history of Rome. Later authors, such as Plutarch, Ovid, and Cassius Dio, recalled the incident as well, often providing unverifiable accusations against the women, denigrating their characters. Plutarch, for instance, recorded that the women refused to have sex with their husbands or bear children unless the law was repealed. Ovid accused the women of having secret abortions.

The demonstration against the lex Oppia, and other protests by women throughout Roman history, illustrate women’s engagement in politics. Life for a female citizen in Rome meant that she was out and about in the city; she dined with her husband and his friends; she attended public events. Because women and men lived in intersecting circles, women were exposed to politics and political action. Despite having no official authority, women—especially married ones—still felt emboldened to participate in unofficial ways that gained the acceptance, if not always the approval, of Roman men. Women’s motivation and ability to enter the male-controlled political arena, and advocate for themselves, is rooted in Romulus’ promise, imagined by Livy, of shared property and civic rights and in that very first women’s protest on the battlefield.