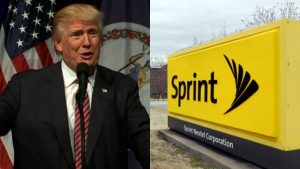 Donald Trump just can’t tell the truth. He is a professional con-man that tells lie after lie and always tries to take credit for things he had absolutely nothing to do with. Just this week, Trump tried to tell the world that he was responsible for convincing Sprint to bring 5,000 jobs back the United States.

“Because of what’s happening and the spirit and the hope I was just called by the head people at Sprint and they’re going to be bringing 5,000 jobs back to the United States,” Trump said on Wednesday. “Masa [Son] and some other people were very much involved with that.”

The company went along with his claims at first but has now confirmed that this is all a bunch of [bull]. Sprint CEO Marcelo Claure first issued a press release touting the deal.

“We are excited to work with President-Elect Trump and his administration to do our part to drive economic growth and create jobs in the U.S.,” the statement read. “We believe it is critical for business and government to partner together to create more job opportunities in the U.S. and ensure prosperity for all Americans.”

Trump told Bloomberg that he had spoken with the “head person” and “he said because of me they’re doing 5,000 jobs in this country.”

But, as mentioned earlier, this all turned out to be a load of crap. As Engadget reports:

“This is part of the 50,000 jobs that Masa previously announced,” she said. “This total will be a combination of newly created jobs and bringing some existing jobs back to the U.S.”

So there you have it, folks. Donald Trump has been caught with his pants on fire yet again. He had nothing to do with bringing these jobs back to the U.S. They were already coming back. Trump, opportunistic con-man that he is, decided he would swoop in and take the credit, just like he did when he lied about keeping 1,100 Carrier jobs from going to Mexico. And even worse, Sprint tried very hard to let him.