There were distinct differences between city and village (country) life, each with its own unique advantages and disadvantages.

Although, with exceptions at Amarna, there are few surviving traces of noble villas from the New Kingdom, we have some idea of how they must have looked from images preserved upon tomb walls and from some texts. In both these sources we are given a vivid impression of how a rich Egyptian treasured a vision of restful country living, much like an English gentleman of the 18th century might have sought refuge from the hurley-burley of London in his country estate. The following description comes from a New Kingdom document, Papyrus Lansing. It describes the amenities and comforts of the country villa belonging to a man called Raia:

Raia has built a splendid villa which is opposite the city of Edjo. He built it on the [river]-bank … as a work of eternity, planted with trees on every side of it. A water-channel has been dug in front of it and one’s sleep is only disturbed by the splash of a wave. No one can tire of looking at it, happy at its gate and giddy in its halls. Fine door-posts of limestone are inscribed and carved, doors newly hewn and walls inlaid with lapis-lazuli.

Its granaries are well stocked and filled with plenty. [There is] a fowl-yard and an aviary with geese, byres full of oxen, a breeding bird-pool with geese and horses in the stable. There are skty-boats, ferry-boats and cattle-boats moored at its quay.

You stroll around new islands and endless pasture whose grain is more plentiful than the standing water [of the inundation] which was there before. Boat-crews have landed at its quay to gladden the granaries [with] many endless heaps for the lord of Thebes. 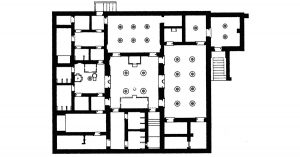 At the heart of every elite estate was the core house. This multi-roomed example from Amarna, belonging to the vizier Nakht, has a square ground plan of 30 m (almost 100 ft) along each side. Courtesy Barry Kemp/The Amarna Trust.

At its west is a pond for hunting ro-geese of all sorts, a hunting-resort from the very beginning. Another one of its ponds is full of fish, more than in a lake. Its ah-bird is like a bird of the marshes.

Joy dwells within it and no one wishes for anything else for it.

Many animal-stalls are around it and a grazing-field for oxen, goats, capering kids and many lowing short-horned cattle.

It has many cool places with green grass in both summer and winter. Within the irrigation-basins are many wd-fish, bulti-fish, sna-fish and dss-fish; fish are more numerous than the sands on the river bank and there is no end of them!

The god Amun founded [this place]; truly it is his place.

You sit in the shade of its trees and vines, eating their fruit, wearing wreaths of their branches and intoxicated with their wine.

Here you are healthy and contented every day, the blessings of Amun are with you O Raia, Chief Overseer of the Cattle of Amun. 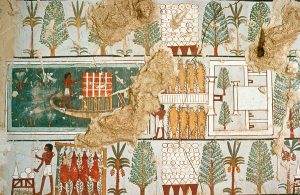 Depictions of the villas of elite Egyptians on the walls of their tombs often reflect the description of Papyrus Lansing, stressing the abundance of their gardens and storerooms. Werner Forman Archive.

Two things are being stressed in the encomium of Papyrus Lansing. First is the degree of comfort (Raia is woken by nothing noisier than a gentle river-wave splashing against the shore) and leisure (hunting and fishing) the villa provides. But it is also noticeable how much emphasis is placed on its economic endowments. Raia’s villa is notably well-stocked in being able to produce food (and high-quality food at that) for Raia and his family, but its self-sufficiency even extends to chariot-production!

Although this seems to be an idyll of isolated, peaceful country living, there is one section of this reverie omitted from the quotation above, because it deserves to be considered further.

The poor, the old and the young have all come to live in its neighbourhood. Your sustenance is established and a flood-bearing fowl is for whomsoever has come to you. 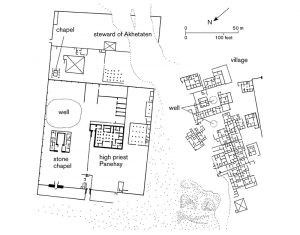 The house of the high priest Panehsy at Amarna is a good example of an elite villa, set in its own spacious grounds. It had a cluster of much smaller houses built next to it, which may have been satellite dependencies of the elite residence. Steven Snape after Barry Kemp.

What does this mean? It appears to describe the opposite of what most people would want in a country residence: near-neighbours of a clearly disadvantaged and seemingly dependent social class. However this is exactly the situation we find at Amarna, with large villas surrounded by small residences in what can be regarded as ‘mixed’ neighbourhoods. This pattern of ‘mixed’ neighbourhoods seems to be something of a common occurrence in Egyptian cities, possibly thanks to the notion of patronage by the villa of the dependencies as an aspect of local government, at least as far as acquisition of basic staples of life might be concerned. 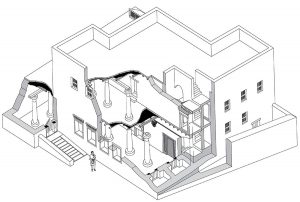 It answers some of the questions of city (as opposed to village) living – how do the specialized craftsmen of big industrial cities acquire their agricultural requirements (most obviously food and drink, but also clothing, etc.) if they are now carrying out specialized tasks and do not directly (unlike the peasantry) actually produce anything that can be eaten and drunk? For specialized communities of great importance to the state (such as Deir el-Medina), provision could be made from the state apparatus, but the direct provision to all the dwellers within a large city would require a huge command economy. Instead, it seems that the mechanism for distribution to the city-dwellers of Amarna, and perhaps elsewhere, was based on delegated patronage. The king gave land to the elite of Amarna, who lived in large villas, which also had productive capacity in them. These elite, as part of their public duty, themselves redistributed agricultural goods and other manufactured goods to their clients.