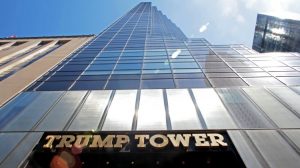 New York City mayor Bill de Blasio has sent a letter to US President Barack Obama asking for reimbursement for the high cost of providing security protection for Trump Tower. The $35-million invoice covers the time from Election Day to President-elect Donald Trump’s inauguration, equaling some $470,000 each day.

“We will be continuing very aggressively in the next few days — calls and meetings with members of the Obama administration and Congress — to nail down the reimbursements for the time between November 8 and January 20,” the mayor said. “That will be the responsibility of the current administration.”

Providing 24/7 high-level security at the Trump Tower, in a very popular tourist area in the heart of Manhattan, is a strain on the police department. An additional 50 police officers work daytime shifts to protect the area around Trump’s residence.

“This is a highly-trafficked, dense urban environment, and one that presents an unprecedented and unique target for potential terrorist activity,” de Blasio wrote in a letter to Congress. “No other President in modern history has had his primary residence located in such a densely-populated neighborhood.”

Protecting a President or President-elect is the job of the Secret Service, but local law enforcement is routinely tasked with providing assistance.

De Blasio said at a news conference in November, “This is a very substantial undertaking. It will take substantial resources, and we will begin the conversation with the federal government shortly on reimbursement for the NYPD for some of the costs that we are incurring. We are particularly concerned about overtime costs, and we think it’s a very valid situation to turn to the federal government for the maximum possible reimbursement for these costs.”

Every President has local law enforcement protection when they return home, but Trump’s protection is very high, due primarily to the location of his residence.

It is not known whether the cost of his protection will decrease when he moves into the White House, as Melania Trump and their 10-year-old son Barron will remain in midtown Manhattan and the President-elect has stated that he will visit them frequently.