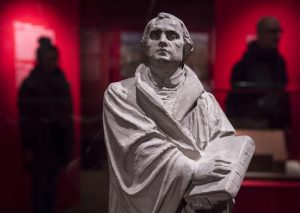 An exhibition for the Luther monument in Worms. AP Photo/Jens Meyer

This year marks the 500th anniversary of Martin Luther’s famous 95 Theses, which helped spark the founding of the Reformation and the division of Christianity into Protestantism and Catholicism.

The 95 Theses critiqued the church’s sale of indulgences, which Luther regarded as a form of corruption. By Luther’s time, indulgences had evolved into payments that were said to reduce punishment for sins. Luther believed that such practices only interfered with genuine repentance and discouraged people from giving to the poor. One of Luther’s most important theological contributions was the “priesthood of all believers,” which implied that clerics possessed no more dignity than ordinary people.

Less known is the crucial role Luther played in making the case for ordinary people to read often and well. Unlike the papacy and its defenders, who were producing their writings in Latin, Luther reached out to Germans in their mother tongue, substantially enhancing the accessibility of his written ideas.

In my teaching of philanthropy, Luther’s promotion of literacy is one of the historic events I often discuss with my students.

Born in Germany in 1483, Luther followed the wishes of his father to study law. Once, while caught in a terrible thunderstorm, he vowed that if he were saved, he would become a monk.

Indeed, Luther later joined the austere Augustinian order, and became both a priest and a doctor of theology. Later he developed objections to many church practices. He protested the promotion of indulgences, the buying and selling of clerical privileges, and the accumulation of substantial wealth by the church while peasants barely survived. Legend has it that on Oct. 31, 1517, Luther nailed his 95 Theses to the door of the church in Wittenberg, the town where he was based. 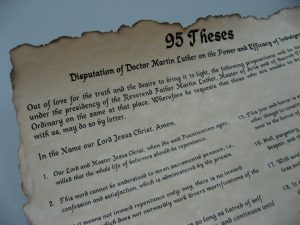 He was branded an outlaw for refusing to recant his teachings. In 1521, Pope Leo X excommunicated Luther from the Roman Church. His patron, Frederick of Saxony, saved Luther from further reprisal and had him taken in secret to a castle, where he remained for two years.

It was during that time that Luther produced an immensely influential translation of the New Testament into German.

Gutenberg’s earlier introduction of the printing press in 1439 made possible the rapid dissemination of Luther’s works throughout much of Europe, and their impact was staggering.

Luther’s collected works run to 55 volumes. It is estimated that between 1520 and 1526, some 1,700 editions of Luther’s works were printed. Of the six to seven million pamphlets printed during this time, more than a quarter were Luther’s works, many of which played a vital role in propelling the reformation forward.

Thanks to Luther’s translation of the Bible, it became possible for German-speaking people to stop relying on church authorities and instead read the Bible for themselves.

Luther argued that ordinary people were not only capable of interpreting the scriptures for themselves, but that in doing so they stood the best chance of hearing God’s word. He wrote,

In promoting his point of view, Luther helped to provide one of the most effective arguments for universal literacy in the history of Western civilization.

At a time when most people worked in farming, reading was not necessary to maintain a livelihood. But Luther wanted to remove the language barrier so that everyone could read the Bible “without hindrance.” His rationale for wanting people both to learn to read and to read regularly was, from his point of view, among the most powerful imaginable – that reading it for themselves would bring them closer to God.

For much of Luther’s life, his remarkable output in theological treatises was exceeded only by his Bible commentaries. He believed that nothing could substitute for direct and ongoing encounters with scripture, which he both advocated for and helped to shape through his detailed commentaries.

Luther had many reasons to favor the dissemination of learning. He was a university professor. His 95 Theses were intended as an academic disputation. His teaching and scholarship played a crucial role in the development of his theology. Finally, he recognized the crucial role students would play in carrying his movement forward.

So powerfully did Luther’s influence reverberate down through the ages that, during a visit to Germany in 1934, Rev. Michael King Sr. chose to change both his and his son’s name to Martin Luther King. MLK Jr., namesake of the great German reformer, would make full use of the power of free speech in catalyzing the American civil rights movement.

In posting his 95 Theses, Luther was encouraging a vigorous exchange of ideas. The best community is not the one that suppresses dissent but one that challenges ideas it finds objectionable through rigorous argumentation. It is largely for this reason that the founders of the United States took so seriously freedom of religion, free association and the protection of a free press.

Luther trusted ordinary people to discern the truth. All they needed was the opportunity to interpret what they read for themselves.