“I’ve come to kill your monster!” exclaims Beowulf in the 2007 film version of the epic poem. But how do his suspicious Danish hosts know that this monstrously huge stranger is actually a hero searching for glory? And, by the same token, how do modern audiences with no prior knowledge of the Marvelverse know that the Incredible Hulk is a “good guy”? At least readers of the Icelandic sagas had an advantage: they were used to their heroes being monsters – at least part of the time.

Iceland’s medieval literature is rich in many regards: in Eddas and sagas, it tells us about early Scandinavia and its expanding world-view, ranging from the mythology of the North, the legends and heroes of the migration age, the Viking voyages and the settlement of Iceland all the way through to the coming of Christianity and the formation of kingdoms in Scandinavia.

It also tell us about monsters – for the literature of medieval Iceland is also rich in the paranormal. In mythology, gods and men fight against giants. In the sagas, humans battle the forces of disorder, the trolls and revenants – think a cross between a vampire and a zombie – that inhabit the wild mountains and highlands of Norway and Iceland. Or at least that is what, on the surface, appears to happen.

Monstrosity, however, is never clear-cut. Because of their hybrid nature, monsters cannot easily be categorised – instead, they demand to be approached and read in a more nuanced way. Such a reading will soon lead to the realisation that not all monsters are created equal, that they do not all pose the same threat. For trolls are not always trolls.

In fact, the word “troll”, which we now understand to denote some kind of mountain-dwelling ogre, was used for a number of different kinds of figures: witches, the undead, berserkers, but also people who were larger or stronger or uglier than ordinary humans. Which leads us to the monstrous heroes of the medieval Icelandic family sagas, or Íslendingasögur.

Half monster, half hero

In these texts, we encounter characters that are both troll-like monster and human hero – that both threaten and defend society and that therefore draw our attention to the fact that the boundary between monstrosity and heroism is not only thin but also regularly crossed. 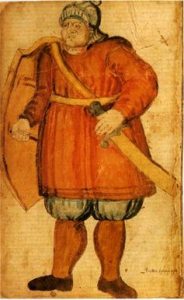 While some of the creatures that are referred to as “trolls” – especially revenants, but also witches and even berserkers – are unequivocally monstrous, the characters that occupy the most ambiguous position suspended between monstrosity and heroism are outlaws. These, however, are also the characters that have captured the Icelandic imagination the most: there are three sagas that scholars agree to be major outlaw stories, the sagas of Grettir Ásmundarson, Gísli Súrsson, and Hörðr Grímkelsson.

There are also some sagas that draw on similar narrative motifs to tell the story of men who are outlawed for at least parts of their lives, like the saga of the Sworn Brothers (Fóstbræðra saga) or the saga of the people of Kjalarnes (Kjalnesinga saga). All of these marginal heroes border not only on society, but also on that which one encounters when one leaves the social spaces behind: the monstrous.

This has less to do with their physical location in the “wild”, and more with the way they interact with society: when Hörðr goes raiding with his outlaw band, he becomes a threat to the local community. And such a threat to economic growth and social stability has to be removed. However, if these characters were only threatening, only monstrous, they would not have their own sagas. They are not only monsters: they are also heroes, defenders of the society they themselves threaten.

The story of Grettir “the Strong” Ásmundarson is a particularly interesting example of this. In the 19 years Grettir spends as an outlaw both in Norway and Iceland, he constantly moves back and forth between human society and isolation as a “monster”, never fully belonging to either. When he steals from the local farmers or simply sits on their property and refuses to let go, he becomes a monster in the eyes of society. But when he fights against trolls and revenants, performing tasks no one else would be able to perform, he becomes a guardian of the medieval Icelandic galaxy that consists of farms and sheep. 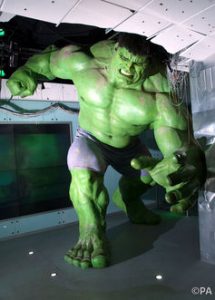 In this duality, Grettir and Hörðr and other strong, troll-like men, are not too dissimilar from the monstrous heroes of the present day. Bruce Banner has clear anger management issues, but when he transforms into the Hulk, his strength enables him to perform amazing feats of heroism in defence of society. But the dual nature of his character can also make him turn against his friends and allies, just as Hörðr turns against his family when he wants to burn his own sister in her house.

This fluid continuity between monstrosity and heroism has been explored extensively in medieval literature: Beowulf or the Táin Bó Cúailnge, (the Cattle Raid of Cooley) – just like the Icelandic sagas – have their fair share of monstrous heroes. But it keeps fascinating us even today.

Shows such as Heroes have added a new shade to this exploration in recent years. Currently, even the humanness of zombies is on the cultural agenda in Warm Bodies or iZombie. Let us hope that, as this exploration continues, as we become more aware of the continuity between the monstrous and the human, we will eventually realise that, often, “the other” is just another “self”.