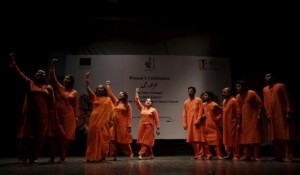 An all-parties conference convened by Pakistan’s oldest Islamic political party and attended by powerful religious groups asked the government on Tuesday to retract an “un-Islamic” law that gives unprecedented protection to female victims of violence.

It also calls for the creation of a toll-free abuse reporting hot line, women’s shelters and district-level panels to investigate reports of abuse and mandates the use of GPS bracelets to keep track of offenders.

But since the law’s passage, many conservative clerics and religious leaders have denounced it as being in conflict with the Muslim holy book, the Koran, and the constitution.

On Tuesday, representatives of more than 35 religious parties and groups came together for a conference called by the Jamaat-e-Islami party and condemned the women’s protection law as un-Islamic.

“The controversial law to protect women was promulgated to accomplish the West’s agenda to destroy the family system in Pakistan,” read the joint declaration issued at the end of the concrescence. “This act … is redundant and would add to the miseries of women.”

The passage of the new law was welcomed by rights groups but spirits have since dampened as conservative voices have increasingly called for its retraction.

On Monday, Fazlur Rehman, the chief of one of Pakistan’s largest religious parties, the Jamiat-i-Ulema Islam, said Prime Minister Nawaz Sharif had promised him at a meeting that he would address the reservations of religious parties.

“Prime Minister Nawaz Sharif heard our reservations against the Punjab Protection of Women Against Violence Act 2016. He promised to amend the law so that it doesn’t contravene the teachings of the holy Koran,” Maulana Fazl told journalists at his residence.

Earlier this month, the Council of Islamic Ideology, a powerful Pakistani religious body that advises the government on the compatibility of laws with Islam, declared the Women’s Protection Act un-Islamic.

A prominent lawyer has also filed a petition in the top sharia court asking it to strike down the law.