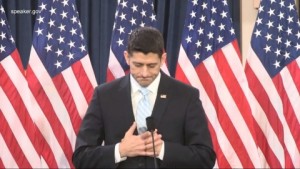 Well, we called it. Paul Ryan’s first act as Speaker of the House was to do his job and get work done. As a result, the anti-everything rage factory within his own party has rewarded his efforts by threatening to take his job away with a primary challenge next election .

Citing his unhappiness with the fact that Ryan defied normal right-wing stupidity and did actual work in passing laws regarding trade and immigration, a yet unnamed Tea Party businessman is moving to unseat him as a Congressman next election cycle.

A political consultant speaking on behalf of the still mysterious challenger issued this statement:

“I’ve had the privilege of attending multiple meetings with this individual, during which he has expressed his sense of betrayal by Speaker Ryan. He has a strong desire to see real representation for the people of the district versus a congressman who represents special interests in Washington.”

“It’s very personal for him. He intends to run a full-scale candidacy that will shake up the establishment in a profound way.”

Ryan is Speaker of the House, and the Republican establishment is going to want to keep him in place. However, the fact that he compromised with Democrats immediately after taking the job is going to be a tremendous vulnerability for him.

Ryan pushed through a $2 trillion spending bill which increased the deficit, infuriating the “cut everything and shut down the government” wing of his party – gave up on the fight to defund Planned Parenthood – gave up on the attempts to block President Obama’s plan to bring in 10,000 Syrian refugees and OK’d funding for alleged “sanctuary cities” to provide a safe space for undocumented immigrants. These cardinal sins of Conservatism are not going to be easy for Speaker Ryan to deal with.

Carrying the stain of “working with Obama” will play heavily in any effort to unseat him. Considering how inflamed Republican voters are at the “establishment,” while feeling especially justified with the Trump effect, it just might end up working.