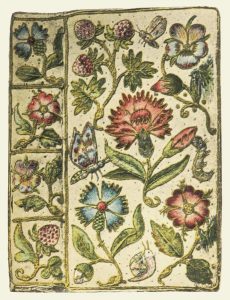 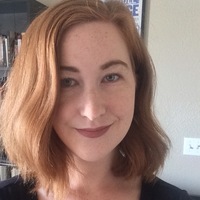 This article, Pens and Needles: Reviving Book-Embroidery in Victorian England, was originally published in The Public Domain Review under a Creative Commons Attribution-ShareAlike 3.0. If you wish to reuse it please see: https://publicdomainreview.org/legal/

There are few more pleasing accupations [sic] for the skillful fingers of a lady,” wrote the Victorian librarian William Salt Brassington in his A History of the Art of Bookbinding (1893), “than that of embroidering a book-cover”.1

Initially a sixteenth- and seventeenth-century practice of decorative embroidery on religious texts or presentation copies for royalty, embroidered books were a lavish alternative to leather bindings that allowed for the individualized ornamentation of bookish exteriors. This practice of ornamented bookbinding enjoyed a surge of popularity as a handicraft in the nineteenth century. In a variety of publications, from magazines to histories of bookbinding and collecting, middle-class Englishwomen were encouraged to ply their needles within an explicitly patriotic historical tradition.

The British Museum acquired a number of early modern embroidered books in the initial bequest of the Old Royal Library by George II in 1757, shortly after its founding. At the end of the nineteenth century, innovations in photography and printing allowed that collection, as well as select examples held at other British institutions such as the Bodleian and the South Kensington Museum, to be reproduced in book form and introduced to a broader readership. The first to treat the embroidered book individually was Cyril Davenport’s English Embroidered Book-bindings, published in 1899 as part of a series titled The English Bookman’s Library.

Davenport’s volume reproduces images of fifty-two books, some in color but most in half-tint black and white. The plates and their accompanying descriptions are organized first according to fabric type — canvas, velvet, or satin — and then chronologically. Working from original photographs, Davenport tinted some and added embellishments to others for better visual effect. One color print is of a beautiful copy of Christopherson’s Historia Ecclesiastica, owned by Queen Elizabeth I. The three volumes are bound in matching deep green velvet and are delicately embroidered with the royal coat of arms, Tudor and York roses, and a scattered field of small pearls. A colored photograph of one volume serves as the frontispiece to Davenport’s book, and he admits to doctoring the photograph in order to restore some of the missing pearls. 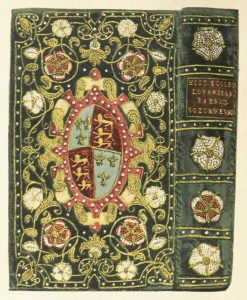 As the series title implies, this book — which functions mostly as a portable paper exhibit of early modern embroidered bindings — participates in a century-long enthusiasm for masculine bookishness. A wave of book-madness, referred to by contemporaries with the delightful term “bibliomania”, swept the men of England’s upper classes at the beginning of the nineteenth century. The “bookman” emerged from this frenzy of book buying and selling as a stock character of the later part of the century, a figure invested (perhaps to an extreme) in the bodies of books. As scholar Phillip Connell has suggested, this interest in books also served as a patriotic attempt to establish a national literary heritage in Britain.2

The English Bookman’s Library represents a body of late-Victorian book-historical writing that is invested in reproducing and displaying the holdings of national institutional libraries as both collectibles and as models for the contemporary fine press movement. The short series, which also included H. R. Plomer’s A Short History of English Printing (1900), and W. Y. Fletcher’s English Book Collectors (1902), emphasized a historical trajectory that culminated in the work of presses such as William Morris’ Kelmscott Press, best known for producing elaborate editions inspired by illuminated manuscripts. As series editor Alfred W. Pollard writes in his “General Introduction”, this is a “new series of books about books, exclusively English in its aims”, and seeks to fill in the gaps of book history at a time when, as he “boldly” says, “the book-work turned out . . . by the five or six leading printers of England and Scotland seems to [Pollard], in both technical qualities and the excellence of taste, the finest in the world”.3 In other words, the series is intended to shore up this claim of primacy in modern fine press printing.

However, Davenport’s entry on embroidered bindings is unique in its explicit invitation to women to participate in their revitalization. 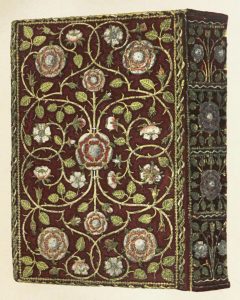 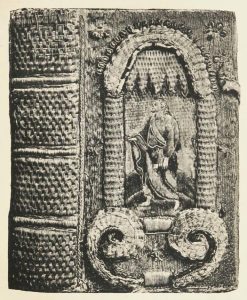 “Many book-covers have been embroidered during the last few years in England by ladies working on their own account,” he writes, suggesting that his book and its instructions offer an opportunity for women who have, he implies, been embroidering books simply for their own amusement, to join the larger national history he evokes.4 This invitation supports a broader cultural investment in revitalizing England’s artistic reputation, shared, for example, by writers like Brassington: “at the present time a taste for the old kinds of embroidery is being fostered by people who desire to see England again famous for her needlework as she was in the thirteenth century”.5

“Fancy-work”, or domestic handicrafts from flower pressing to needlework, flourished during the nineteenth century as a rapidly growing middle class relegated more and more women to exclusively domestic spaces. The products populated the famously cluttered Victorian sitting room: embroidered pillows and footstools, embroidered accessories and furnishings, terrariums, and taxidermy on display. However, for many women, embroidery and other crafts were also a source of supplementary income. Crafts were sold and exchanged at local markets and charity bazaars; other times embroidery work was outsourced to women working from home, creating a silent workforce. Needlework also served as a mode of personal and artistic expression that often inhabited the social spaces of the home, circulating in surprising ways. 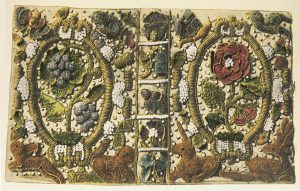 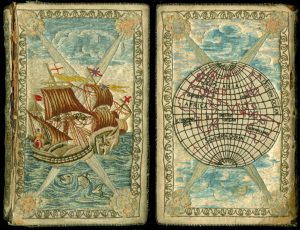 Calls for women to resume book-embroidery echo this complicated place of handicraft in Victorian culture, both reinforcing the idea of the “domestic sphere” and at times challenging assumptions of female passivity. Brassington, Davenport, and other male contemporaries frequently couched their pitches for such a revival within gendered frameworks of labor. One author, in a short article for The Bookworm, condescendingly suggests that “an outlet for skill at once useful and ornamental might be found in working book-covers instead of slippers and antimacassars”.6 Engaging in needlecraft played into expectations of delicacy and decoration as complementary, rather than dominant, modes of art — and the art of book embroidery could be seen as essentially confining women to the exteriors of books. Yet Davenport’s definition of the embroidered book as needlework designed explicitly “for the purpose of adorning that particular book,” and not haphazardly recycled, also invites his presumably female reader into the interior.7

In this framework book-embroidery requires intellectual engagement with a text, and careful attention to the historical examples which, Davenport claims, can be “advantageously studied” by interested craftswomen.8 The embroidered book thus offered Victorian women a unique surface for bridging handicraft and literary history. Moreover, Davenport consistently couches his descriptions of the bindings in their connection to English institutions and historical figures, revealing a persistent thread of patriotic historicism. In taking up book -embroidery, the average middle-class Englishwoman joined the company of queens.

One of Davenport’s chief examples is a manuscript of The Miroir or Glasse of the Synneful Soul, copied out by the hand of then-Princess Elizabeth and potentially covered and decorated by her as well. The manuscript was a gift to her stepmother, Katherine Parr, and features the queen’s initials surrounded by hearts-ease flowers. Davenport writes this book into a patriotic domestic history that blends writing and embroidery, emphasizing the relatively amateur quality of the work — not likely to be the work of a hired professional — which aligns with expectations of amateur expertise applied to Victorian women’s needlework. 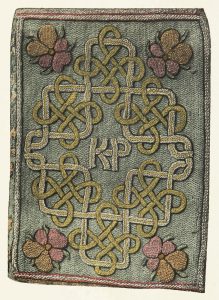 Embroidered cover to Princess Elizabeth’s copy of The Miroir or Glasse of the Synneful Soul, copied out in her her own hand when just 11 years old, featured in Cyril Davenport’s English Embroidered Book-bindings (1899) — Internet Archive

Another example from the royal collection is a 1578 edition of The Epistles of St. Paul, held by the Bodleian and much described by nineteenth-century authors of books on embroidery and book-binding. It also belonged to Queen Elizabeth and contains a note in her own hand. As Davenport transcribes it, it is a melancholy but beautifully worded sentiment:

I walke manie times into the pleasant fieldes of the Holy Scripture, where I plucke up the goodlie greene herbes of sentences by pruning, eate them by reading, chawe them by musing, and laie them up at length in the hie seat of memorie by gathering them together, so that having tasted thy swetenes I may the less perceive the bitterness of this miserable life.9

The book’s embroidery is also attributed to the queen. On both covers are legends in Latin, surrounded by gold cord. Davenport acknowledges that, like the previous example, there is no absolute proof of the queen’s hand in making the cover. However, he argues, its simplicity points to it being of amateur, rather than professional, origin. Including Elizabeth’s meditation on reading with her books reinforces a national history bound up in reading, writing, and embroidery. It also illuminates a late nineteenth-century urge to express emotion through that same entanglement of the written word and material culture. 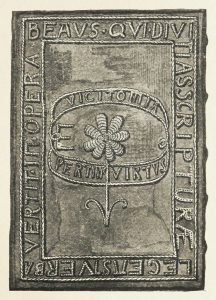 The most significant examples of embroidered books emerged from the anti-industrial Arts and Craft Movement, which flourished in Britain between 1888 and 1920. Exemplified by William Morris, whose Kelmscott Press is briefly mentioned in Pollard’s introduction to The English Bookman’s Library as the preeminent contemporary example of fine book making in England, the Arts and Crafts Movement sought to elevate the materials and work of craftsmen — and craftswomen.

Morris’ daughter May was an influential and important designer and embroiderer who exhibited, taught, and wrote about embroidery extensively. Though only twenty-three, she took over management of the embroidery division of her father’s company in 1885 and ran it until his death in 1896.

One of May Morris’ contributions to the first Arts and Crafts Exhibition Society, held in London in 1888, was an embroidered book cover. In the catalog it is described as a “silk-embroidered cover for ‘Love is Enough’”, a book of her father’s poetry.10 Morris embroidered at least a few other book covers. The University of Manchester has a copy of The Tale of King Florus and Fair Jehane bound by May Morris in orange silk with a design of two birds under a tree. Morris, like her father and Davenport, was particularly interested in looking to earlier periods for inspiration. In Decorative Needlework (1893), she describes the medieval and early modern periods as the height of artistic embroidery. Her work, too, is motivated by a desire to revitalize a patriotic tradition. The embroidered book offers an engagement with aesthetic and literary history: the embroidered cover, worked by hand, becomes a literal interface between craft and the text. 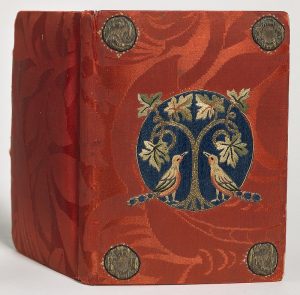 Cover to The Tale of King Florus and Fair Jehane, thought to be embroidered by May Morris, daughter of William Morris — The University of Manchester Library

The Victorians saw a return to intimate connections between individual hands and books as an antidote to the emerging mass media, in a way that resonates with our own twenty-first century sensibilities. Referring to some of the same early modern examples enshrined in print a few years later by Davenport, the author of an article in Cassell’s Family Magazine for 1894 laments that “Books were treasures in those times; now they are so innumerable that they are tossed about anyhow by half of their owners.”11 Creating beautiful embroidered covers, the article suggests, can reassuringly set apart a favorite volume, and show books the attention they deserve. As collections of innumerable texts can be easily stored and retrieved on digital devices, we too have to reconsider how and why we value books. As the history of book-embroidery makes visible, craft has a great deal of generative potential for reimagining that relationship.

A History of the Art of Bookbinding: With Some Account of the Books of the Ancients (1894), by William Brassington

Decorative Needlework (1893), by May Morris