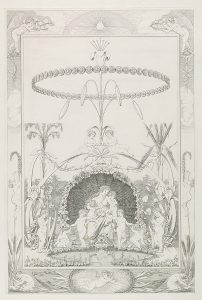 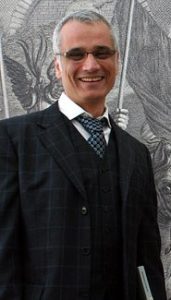 I spoke with Thomas W. Gaehtgens, director of the Gettyt Research Institute and a scholar of 18th- and 19th-century art, about the  significance of the prints from Philipp Otto Runge’s four-print suite Times of Day, their iconography, and why they were so popular in their own day.

You’ve mentioned the difficulty of interpreting these images. Do you have a particular approach? The images with their overriding symmetry are in a way simple, almost decorative. Can you reconcile the transparency of the formal qualities with the iconographic opaqueness?

The Times of Day are, without doubt, one of the most important works of German Romanticism, and they renew Baroque iconography through the invention of Romantic symbolism. Contrary to Caspar David Friedrich, who focuses on a realistic depiction of nature, Runge tries to express his philosophy of nature in an emblematic way. Accordingly, one finds several different layers of meaning, not only within the main compositions, that is to say the interior images of the plates, but also within the amazingly elaborate design of the printed frames.

To interpret these images it’s necessary to take a closer look into the formal and conceptual background of Runge’s Times of Day. The artist was familiar with Jakob Böhme, a Lutheran mystic living around 1600, in whose philosophy of nature the process of birth, growth, and rise and fall play a vital role. Runge’s prints represent far more than merely the times of day. The four works have to be considered as two pairs, morning/evening and day/night, in which the process of becoming and passing is described. The cycle of the day represents in fact the cycle of life.

The artist also shared similar ideas with the German romantic poets Joseph Freiherr von Eichendorff, who was a friend of Runge’s, Novalis (Georg Friedrich Freiherr von Hardenberg), and Ludwig Tieck. Runge shared in particular their notions of nature. And when reading, for example, Clemens Brentano’s poem “Eingang,” we meet the central elements of Runge’s Times, the everlasting cycle of becoming and fading. 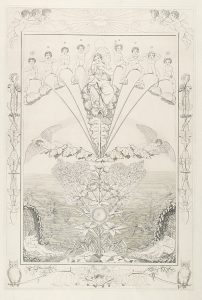 Art historians are so enthralled with the symbolism that they seem to forget the physical qualities of the prints. They’re big, and unusually so. Why?

They were of course thought to be decorations in a room. This explains their popularity and the several later editions. You can still find them today in the music room in Goethe’s house in Weimar. But, it is not only their size that gives them an outstanding physical presence, it’s also their astonishing fineness and subtlety, which makes them absolutely unique. The first very rare edition, to which the Getty Research Institute’s prints belong, was limited to only 25 prints per image. It’s fair to say that our set is flawlessly printed and the lines are outstandingly fresh.

Runge’s “Times” are very much sought after today, but had already been very popular by the time they were brought on the market. How do you explain this popularity?

Runge’s Times of Day hit a nerve. The symbolic representation of the cycle of the day and life formed an unprecedented genre and a new way of narrating. Also, the images’ mysteriousness, together with their detailed design and impressive size, certainly had great appeal as we see from Goethe’s praise for these images. Goethe and Runge, by the way, had a rather complicated relationship, which was largely due to their differing artistic ideals. Goethe’s classic notions praising Greek culture as a model for the present did not exactly coincide with Runge’s, who once famously stated: “We aren’t Greeks anymore.” Goethe calling the Times of Day “mad” [he apparently exclaimed to a visitor, “it’s enough to drive you crazy, beautiful, and mad at the same time!”] hints at this discrepancy. That Runge was nevertheless able to impress Goethe is a clear sign of their immense attraction.

Do you remember what your impression was when seeing the “Times” for the first time?

Oh yes, I do! My professor at the University of Bonn, Herbert von Einem, had a set of the Times of Day prints in his home. When I was his research assistant, I went to his house several times a week and was always fascinated by these engravings. We often discussed their mysterious and enigmatic character, which contrasts with the subtleness and perfection of their design.