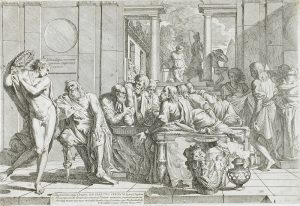 Alcibiades (or Alkibiades) was a gifted and flamboyant Athenian statesman and general whose shifting of sides during the Peloponnesian War in the 5th century BCE earned him a reputation for cunning and treachery. Good looking and rich, he was also notorious for his extravagant lifestyle and loose morals. Never short of enemies or admirers – amongst whom was Socrates – he was one of the most colourful leaders in the history of Classical Athens. 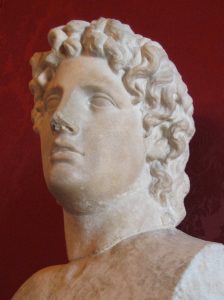 Alcibiades was born in 451/450 BCE, the son of the Athenian politician Cleinias, and his mother Deinomache was from the ancient aristocratic family the Alkmeonidai. Alcibiades was also the nephew of the great Athenian statesman Pericles and he spent his childhood in the family home of his famous uncle. As a young man he was the pupil and friend of Socrates.

In c. 420 BCE Alcibiades was made a general or strategos (at the minimum age of 30) and therefore became a member of the strategoi, the influential military council in Athens which could propose items for the agenda of the assembly. Alcibiades wasted no time in his new role and promptly negotiated an alliance between Athens, Argos, Ellis, and Mantineia, which would last 100 years. Alcibiades would go on to hold the position of strategos for 15 consecutive years

In 415 BCE Alcibiades gave a speech to persuade the Athenians to launch a military expedition to Sicily. The pretext for this expedition occurred in 416/415 BCE when Segesta, a city-state in the west of Sicily, asked Athens for help against local rival Selinus which was allied with Syracuse. Besides imperialist ambition, Alcibiades may well have been after the timber of Sicily, an immensely important material for the Athenian navy. Alcibiades argued that the mixed race population and political instability in Sicily would make a strong and unified military response unlikely. Further, Alcibiades promised that the Persians could be persuaded to assist Athens if certain constitutional changes were made. In the end, Alcibiades won the vote of the assembly despite the doubts expressed by his rival Nikias, and the two generals, along with Lamados (or Lamachus), were given the equal status of strategoi autokratores (unlimited power) and sent, along with 6,000 men and 60 ships, to protect Segesta. 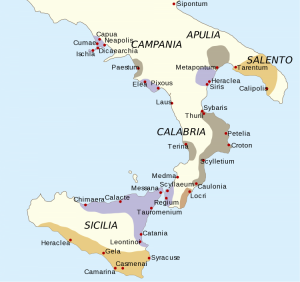 Magna Graecia (Megalē Hellas) refers to the coastal areas of southern Italy which were colonized by various Greek city-states from the 8th to 5th centuries BCE. Later writers such as Strabo also included Sicily and eventually the term came to signify the whole Greek world. / Wikimedia Commons

Shortly before the expedition’s departure from Athens, though, Alcibiades was perhaps the victim of an infamous conspiracy. Hermai (statues with a head of the god Hermes and a large erect phallus) were damaged across the city. The sailors of the Athenian fleet, like all sailors before and since, were a superstitious lot and as Hermes was the patron of travellers, their confidence was badly affected by the attacks. In addition, according to popular opinion, the attacks on the hermai were somehow connected to an attack on the democratic system of Athens. Alcibiades, known as one of the frivolous and impious ‘golden youth’ of the aristocracy, was held as the prime suspect along with several others. To make matters worse, Alcibiades also faced the more serious accusation of profaning the Mysteries of Eleusis during a drinking party or symposium. Perhaps confident he would prove his innocence, Alcibiades called for an immediate trial, but the city procrastinated and he was sent to Sicily anyway. However, Alcibiades was soon officially recalled to Athens to face the court’s guilty verdict. Given that punishment was the death sentence, it is perhaps not surprising that Alcibiades at this point fled to Sparta rather than face the music at home.

Alcibiades made himself useful to his new hosts and, according to his accusers in Athens, he freely gave Athenian state secrets to the Spartans. He also advised the Spartans to take by force the Athenian fortress of Dekeleia (which they did in 413 BCE). Meanwhile, the Athenian expedition in Sicily was a complete disaster with total defeat in 414 BCE and the loss of Nikias and the gifted general Demosthenes. According to Xenophon, Alcibiades had advised the Spartans to send the general Gylippos to aid the besieged Sicilians. However, Alcibiades soon fell out of favour at Sparta, in particular with King Agis, and so he joined the Persian Satrap Tissaphernes (Persia had been giving aid to Sparta so that they might build a fleet to rival Athens). Alcibiades encouraged Persia to keep on friendly terms with both Athens and Sparta, and yet at the same time Alcibiades attempted to convince the Athenian fleet based on Samos that he was the man to negotiate an Athenian-Persian alliance. Alcibiades knew that this would only be possible if an oligarchy gained political control in Athens. To this end Peisandros was sent to Athens where he persuaded the disgruntled aristocrats to attempt a coup d’état. This was successful, and so democracy gave way to an oligarchy of 400. Alcibiades was made strategos by the navy at Samos (who were actually pro-democracy) and despite the 400 being replaced by a wider oligarchy of 5000 in Athens, he led the fleet to victory over the Spartans at Cyzicus on the Hellespont in 410 BCE. Other victories included the defeat of the Persian Satrap Pharnabazos at Abydos and the taking of Byzantium.

In c. 407 BCE Alcibiades returned to Athens in triumph, the old charges against him were dropped, and as a reward for his efforts he was made strategos autokrater once again but this time above all other generals, the only such instance in the history of Athens. In effect then, Alcibiades was now commander-in-chief of the Athenian armed forces. Quashing a rebellion at Andros was followed by an expedition to fight the poleis of northern Ionia. Whilst occupied there, Alcibiades left Antiochos in charge of the fleet at Samos. Unfortunately for Athens, the Spartan commander Lysander took advantage of Alcibiades’ absence and soundly defeated the Athenian navy at Notium (or Notion) in 406 BCE. Alcibiades was blamed for negligence in leaving only a helmsman in charge of the main fleet and was not re-elected strategos. Consequently, he left to live in Thrace, whilst the Spartans went on to finally win the Peloponnesian War in 404 BCE with Lysander’s victory over the Athenian fleet at Aigospotamoi. In the same year, after taking final refuge with the Persian Pharnabazus, Alcibiades was murdered in Phrygia possibly following the intervention of Lysander and the Thirty Tyrants of Athens.